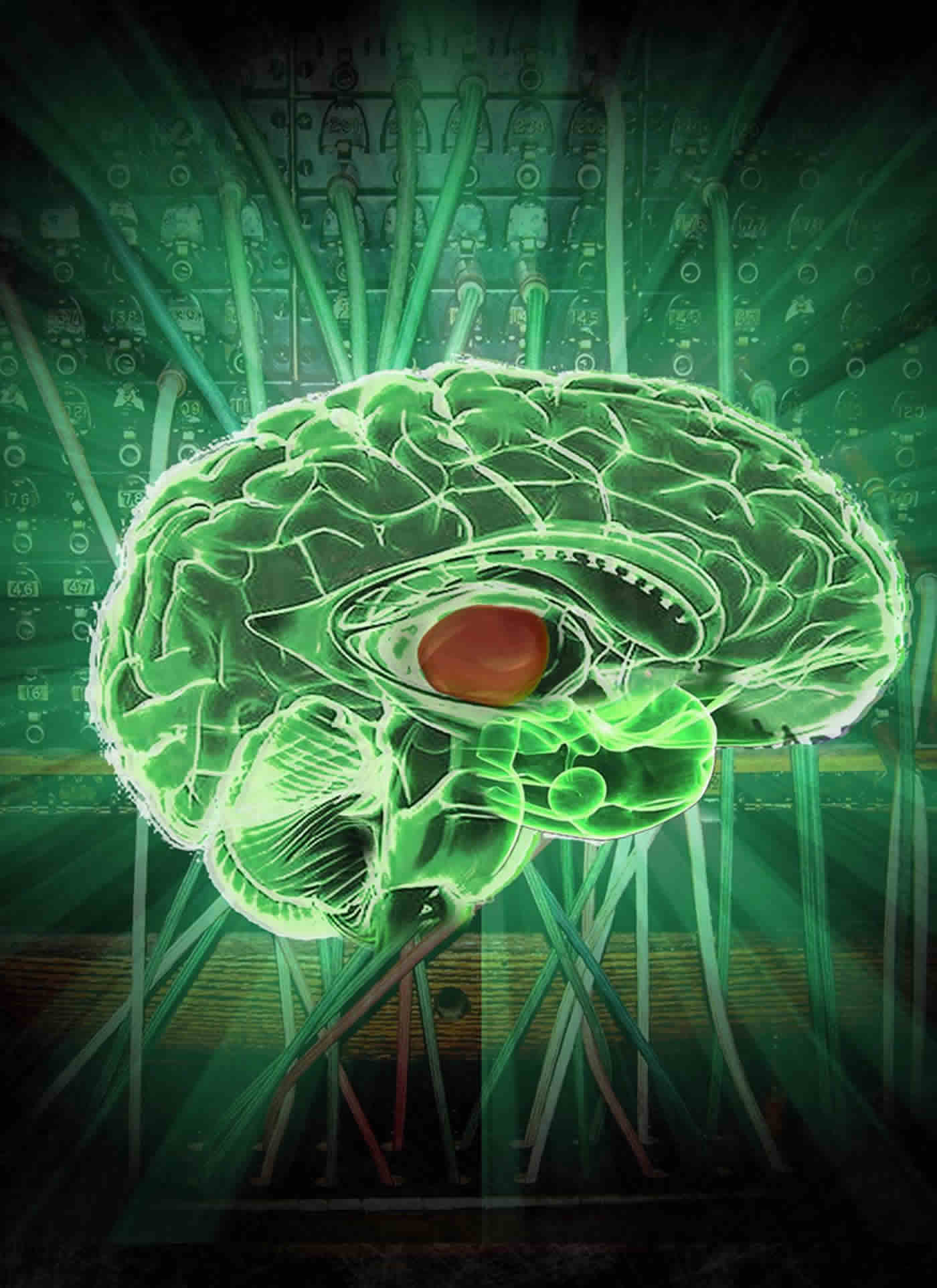 This is an image of a human brain, courtesy of Michael Halassa.The thalamic reticular nucleus (TRN) surrounds the thalamus (pictured in red, with a switchboard in the background).. Credit: Michael Halassa.

How the Brain Multitasks

Findings help explain how the brain pays attention to what’s important and how neural circuits may be ‘broken’ in attention-deficit disorders.

Researchers at NYU Langone Medical Center say they have added to evidence that a shell-shaped region in the center of the mammalian brain, known as the thalamic reticular nucleus or TRN, is likely responsible for the ability to routinely and seamlessly multitask.

The process, they suggest, is done by individual TRN neurons that act like a “switchboard,” continuously filtering sensory information and shifting more or less attention onto one sense — like sight — while relatively blocking out distracting information from other senses, including sound.

In their research in mice, described in the journal Nature online Oct. 21, the investigators showed that TRN neurons, which have been previously implicated in the dampening of brain signals in people, were also less active when the mice were led to focus on — and respond to — a visual flash of light to get a milk reward.

In contrast, when the mice were made to pay attention to a sound and ignore the flash of light, researchers say TRN neurons that controlled vision were more active, suppressing the visual signals in order to pay more attention to the sound. Earlier research by the same team of scientists showed that different TRN neurons controlled specific senses.

“Our latest research findings support a newly emerging model of how the brain focuses attention on a particular task, using neurons in the thalamic reticular nucleus as a switchboard to control the amount of information the brain receives, limiting and filtering out sensory information that we don’t want to pay attention to,” says senior study investigator and neuroscientist Michael Halassa, MD, PhD.

“Filtering out distracting or irrelevant information is a vital function,” explains Halassa, an assistant professor of neuroscience and psychiatry at NYU Langone and its Druckenmiller Neuroscience Institute. “People need to be able to focus on one thing and suppress other distractions to perform everyday functions such as driving, talking on the phone, and socializing.”

According to Halassa, the new research sets the stage for ever more detailed studies on the complex behavior involved in how the mammalian brain pays attention to what’s important, and especially how those neural circuits are broken in cases of attention-deficit diseases, such as ADHD, autism, and schizophrenia.

Halassa says previous research, at NYU and elsewhere, had identified the TRN region of the brain and its individual neurons as possible regulators of the brain’s ability to multitask but had until now been unable to successfully prove the hypothesis. In fact, Nobel laureate Francis Crick hypothesized as early as 1984 that the TRN might function like a gate for the flow of sensory information. However, Halassa explains, scientists faced technical struggles in accurately recording signals from the small anatomical structure of the TRN deep within the brain. There was also no method of isolating behavior associated with the TRN until his research team designed a novel experimental setup to do so.

For the new study, Halassa and his colleagues developed a behavioral experiment in which they monitored the ability of mice to successfully collect a milk reward by paying attention to a light signal or a sound. The test, they say, was designed to gauge how well the area of the brain known to control higher behavioral functions, the prefrontal cortex, could direct the focus on one sense over another.

As part of the test, researchers distracted the mice with opposing stimuli: If the mouse was expecting a flash of light to guide it to the milk reward, the researchers distracted it with a sound, and vice versa. Distracting the mice decreased their ability to collect the food reward to 70 percent from nearly 90 percent, even if the distracting stimulus was removed later.

Concurrently, the research team recorded electrical signals from TRN neurons and also tracked the mice’s behavior while at the same time inactivating various parts of the brain’s neural circuits with a laser beam.

They found that inactivating the prefrontal cortex region of the brain, which is believed responsible for decision-making in complex behaviors, disrupted TRN neural signaling and reduced mice to only random success in obtaining a milk reward when presented with specifically cued light or sound signals. Inactivating the TRN, while leaving the cortical regions intact, also diminished success with obtaining the prompted food reward. Halassa says these results demonstrate how the prefrontal cortex is essential to performing such behavioral tasks and how this part of the brain “stores the knowledge ultimately communicated to the TRN to control how much visual or auditory sensory information is suppressed or not, and how the brain ultimately multitasks.”

Halassa says the team next plans to study exactly how much “distracting” information the TRN can block or allow through and how this mechanism can get disrupted in models of disease, such as autism.

Funding: Funding support for the study was provided by grants from the Swiss National Science Foundation (P2LAP3 151786), the Simons Foundation, the Sloan Foundation, the NARSAD Young Investigator Award, and the National Institutes for Health (R00 NS078115 and R01 MH107680).

How the brain selects appropriate sensory inputs and suppresses distractors is unknown. Given the well-established role of the prefrontal cortex (PFC) in executive function1, its interactions with sensory cortical areas during attention have been hypothesized to control sensory selection2, 3, 4, 5. To test this idea and, more generally, dissect the circuits underlying sensory selection, we developed a cross-modal divided-attention task in mice that allowed genetic access to this cognitive process. By optogenetically perturbing PFC function in a temporally precise window, the ability of mice to select appropriately between conflicting visual and auditory stimuli was diminished. Equivalent sensory thalamocortical manipulations showed that behaviour was causally dependent on PFC interactions with the sensory thalamus, not sensory cortex. Consistent with this notion, we found neurons of the visual thalamic reticular nucleus (visTRN) to exhibit PFC-dependent changes in firing rate predictive of the modality selected. visTRN activity was causal to performance as confirmed by bidirectional optogenetic manipulations of this subnetwork. Using a combination of electrophysiology and intracellular chloride photometry, we demonstrated that visTRN dynamically controls visual thalamic gain through feedforward inhibition. Our experiments introduce a new subcortical model of sensory selection, in which the PFC biases thalamic reticular subnetworks to control thalamic sensory gain, selecting appropriate inputs for further processing.