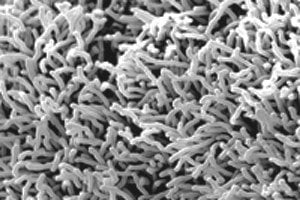 Scanning electron micrograph of rod photoreceptors lining the surface of a mouse retina. These small, noodle-like compartments of the cells are filled with proteins that absorb photons of light and generate the first steps in seeing. Credit: UC Regents.
Home
Featured

On the road at night or on a tennis court at dusk, the eye can be deceived. Vision is not as sharp as in the light of day, and detecting a bicyclist on the road or a careening tennis ball can be tough.

New research reveals the key chemical process that corrects for potential visual errors in low-light conditions. Understanding this fundamental step could lead to new treatments for visual deficits, or might one day boost normal night vision to new levels.

Like the mirror of a telescope pointed toward the night sky, the eye’s rod cells capture the energy of photons ― the individual particles that make up light. The interaction triggers a series of chemical signals that ultimately translate the photons into the light we see.

The key light receptor in rod cells is a protein called rhodopsin. Each rod cell has about 100 million rhodopsin receptors, and each one can detect a single photon at a time.

Scientists had thought that the strength of rhodopsin’s signal determines how well we see in dim light. But UC Davis scientists have found instead that a second step acts as a gatekeeper to correct for rhodopsin errors. The result is a more accurate reading of light under dim conditions.

A report on their research appears in the October issue of the journal Neuron in a study entitled “Calcium feedback to cGMP synthesis strongly attenuates single photon responses driven by long rhodopsin lifetimes.”

Individual rhodopsin errors are relatively small in magnitude ― on the order of a few hundredths of a second ― but even this much biological noise can affect how well the signal gets transmitted to the rest of the brain, the researchers said.

The gatekeeper protects us from “seeing” more light than is actually there ― a misreading that would have endangered an ice-age hunter, as it would a driver at dusk today. The correction may prevent the photon receptor from swamping the intricate chemical apparatus that leads to accurate light perception.

“The rhodopsin receptor is the site where physics meets biology ― where a photon of light from the physical world must get interpreted for the nervous system,” said Marie Burns, professor of ophthalmology and vision science at UC Davis School of Medicine and lead author of the study. “Biology is messy. Rhodopsin does a remarkable but not perfect job.”

Burns and her colleagues studied rod cells in the laboratory and discovered that calcium plays the gatekeeper role.

They uncovered this fundamental new level of control by measuring how long individual rhodopsin receptors remained active in response to flashes of light, and then determining how much calcium’s gatekeeping function modified the rhodopsin signals.

“Basic research like ours often doesn’t translate to immediate clinical treatments for known diseases, but understanding fundamental processes has long-term significance,” Burns said. “In the case of our research, this understanding can prove  essential for progress on a range of vision deficits that are currently poorly understood and untreatable.”

Notes about this visual neuroscience research

Colleagues in the research and co-authors on the paper include Owen Gross, a former doctoral student at UC Davis who is now at Oregon Health Sciences University, and Edward N. Pugh Jr., a professor in the Department of Cell Biology and Human Anatomy and Department of Physiology and Membrane Biology at the UC Davis School of Medicine.

The research was funded with a grant from the National Eye Institute.