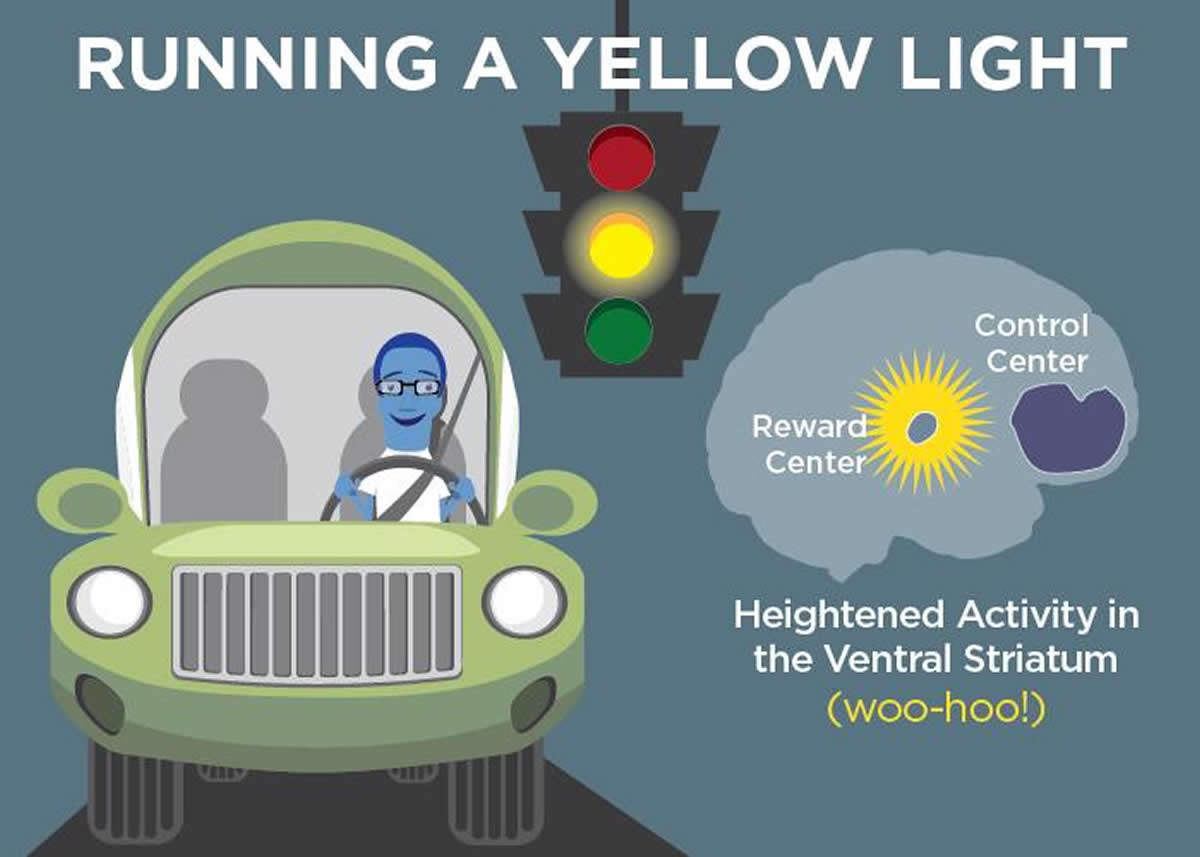 A new study of teenagers an d their moms reveals how adolescent brains negotiate risk – and the factors that modulate their risk-taking behind the wheel.

In the study, reported in the journal Social Cognitive and Affective Neuroscience, 14-year-old subjects completed a simulated driving task while researchers tracked blood flow in their brains. In one trial, the teen driver was alone; in another, the teen’s mother was present and watching, said University of Illinois psychology professor Eva Telzer , who led the study.

Laurence Steinberg, a professor of psychology at Temple University, developed the driving task and evaluated how the presence of peers influenced teen risk-taking, Telzer said.

“He found that peers significantly increase risk-taking among teens,” Telzer said. “I wanted to know whether we could reduce risk-taking by bringing a parent into the car.”

Telzer and her colleagues observed that teens driving alone found risky decisions rewarding. Blood flow to the ventral striatum, a “reward center” in the brain, increased significantly when teen drivers chose to ignore a yellow stoplight and drove through the intersection anyway.

Previous research has demonstrated that the ventral striatum is more sensitive to rewards in adolescence than during any other developmental period, Telzer said.

“The prevailing view is that this peak in reward sensitivity in adolescence underlies, in part, adolescent risk-taking,” she said.

A mother’s presence, however, blunted the thrill of running the yellow light, Telzer and her colleagues found.

“When mom is there, the heightened ventral striatum activation during risky decisions goes away,” Telzer said. “Being risky, it appears, is no longer rewarding in the presence of mom.”

Not surprisingly, teens stepped on the brakes significantly more often at yellow lights when their moms were present than when they were alone.

“The teens go from about 55 percent risky choices to about 45 percent when their mom is watching,” Telzer said. “That’s a big effect.”

Another brain region, the prefrontal cortex, kicked into gear when the teens put on the brakes – but only when their mom was watching, the researchers found. The PFC is important to behavioral regulation, also called “cognitive control,” Telzer said.

“When they make safe decisions, when they choose to stop instead of going through that intersection, the prefrontal cortex comes online,” she said. “It’s activated when mom is there, but not when they’re alone.”

The PFC (the control center) and the ventral striatum (the reward center) are key brain regions involved in adolescent risk-taking behavior, Telzer said. But in the absence of a well-developed control center, adolescents are more susceptible to the stimulating allure of risky behavior.

“Here we’re showing that mom reduces the rewarding nature of risk-taking and increases activation of the prefrontal cortex during safe behavior,” Telzer said. “And so these two mechanisms help adolescents to think twice before running the intersection. A parent’s presence is actually changing the way the adolescent is reasoning and thinking about risk – and this increases their safe behavior.”

Funding: The National Science Foundation and the U. of I. department of psychology funded this research.

Despite being one of the healthiest developmental periods, morbidity and mortality rates increase dramatically during adolescence, largely due to preventable, risky behaviors. Heightened reward sensitivity, coupled with ineffective cognitive control, has been proposed to underlie adolescents’ risk taking. In this study, we test whether reward sensitivity can be redirected to promote safe behavior. Adolescents completed a risk-taking task in the presence of their mother and alone during fMRI. Adolescents demonstrated reduced risk-taking behavior when their mothers were present compared with alone, which was associated with greater recruitment of the ventrolateral prefrontal cortex (VLPFC) when making safe decisions, decreased activation in the ventral striatum following risky decisions and greater functional coupling between the ventral striatum and VLPFC when making safe decisions. Importantly, the very same neural circuitry (i.e. ventral striatum) that has been linked to greater risk-taking can also be redirected toward thoughtful, more deliberative and safe decisions.