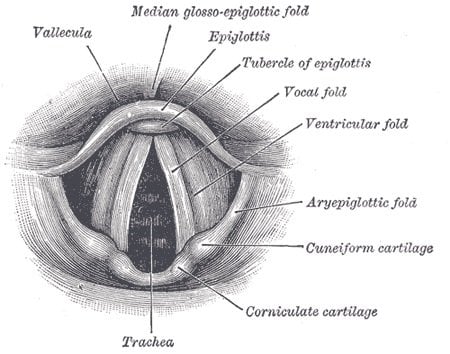 In a healthy larynx, the vocal folds completely open and close during vibration. In people with presbyphonia, the atrophied vocal folds do not close properly, resulting in a gap during vocal fold vibration. The diagram shows the anatomy of the interior of the larynx.
Home
Featured

A new study shows that the vocal training of older rats reduces some of the voice problems related to their aging, such as the loss of vocal intensity that accompanies changes in the muscles of the larynx. This is an animal model of a vocal pathology that many humans face as they age. The researchers hope that in the future, voice therapy in aging humans will help improve their quality of life.

The research appears in The Journals of Gerontology.

University of Illinois speech and hearing science professor Aaron Johnson, who led the new study along with his colleagues at the University of Wisconsin, said that aging can cause the muscles of the larynx, the organ that contains the vocal folds, to atrophy. This condition, called presbyphonia, may be treatable with vocal training, he said.

Johnson said in a healthy, young larynx the vocal folds completely close and open during vibration. This creates little puffs of air we hear as sound. In people with presbyphonia, however, the atrophied vocal folds do not close properly, resulting in a gap during vocal fold vibration.

Surgery and injections may help correct the gap between the vocal folds seen in presbyphonia, but these invasive procedures are often not viable in the elderly population, Johnson said.

His previous experience working with the elderly as a former classical singer and voice teacher propelled Johnson to “become interested in what we can do as we get older to keep our voices healthy and strong.”

“We know exercise strengthens the limb musculature, but we wanted to know if vocal exercise can strengthen the muscles of the voice,” Johnson said.

To find out if vocal training could have an effect on the strength and physiology of the vocal muscles in humans, Johnson turned to a rat model. Rats make ultrasonic vocalizations that are above the range of human hearing, but special recording equipment and a computer that lowers the frequency of the rat calls allows humans to perceive them. (They sound a bit like bird calls).

Both the treatment and control groups contained old and young male rats. In the treatment group, a female rat was placed into a cage with a male rat. When the male expressed interest in her, the female was removed from the cage, causing the male rat to vocalize. The male was rewarded with food for these vocalizations, and after eight weeks of this operant conditioning in which rewards were only given for certain responses, all of the rats in the treatment group had been trained to increase their number of vocalizations during a training session.

At the end of the eight-week period, the researchers measured the intensity of the rats’ vocalizations and analyzed the animals’ larynges to see whether the training had any effect on the condition of their neuromuscular junctions.

The researchers found the trained old and young rats had similar average vocal intensities, but the untrained older rats had lower average intensities than both the trained rats and the young rats that had not been trained. They also found several age-related differences within the groups’ neuromuscular mechanisms.

“Other research has found that in the elderly, there is a dispersion, or breaking apart, of the neuromuscular junction at the side that is on the muscle itself,” Johnson said. “We found that in the older rats that received training, it wasn’t as dispersed.”

These “singing rats” are the “first evidence that vocal use and vocal training can change the neuromuscular system of the larynx,” Johnson said.

“While this isn’t a human study, I think this tells us that we can train ourselves to use our voices and not only reduce the effects of age on the muscles of our voices, but actually improve voices that have degraded,” Johnson said.

Notes about this aging and neuromuscular research

Johnson is also affiliated with the Beckman Institute for Advanced Science and Technology at Illinois.

Contact: Aaron Johnson – University of Illinois at Urbana-Champaign
Source: University of Illinois at Urbana-Champaign press release
Image Source: The interior of the larynx anatomy image is credited to Gray’s Anatomy and is in the public domain.
Original Research: Abstract for “Vocal Training Mitigates Age-Related Changes Within the Vocal Mechanism in Old Rats” by Aaron M. Johnson, Michelle R. Ciucci, and Nadine P. Connor in The Journals of Gerontology. Published online May 13 2013 doi: 10.1093/gerona/glt044