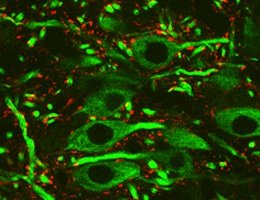 Researchers describe a new neuronal circuit in the auditory cortex which originates in the medial superior olive, where initial processing of ITDs takes place. The new work demonstrates that the sensitivity of MSO neurons to ITDs is modulated via a feedback loop that involves receptors for the inhibitory neurotransmitter gamma-amino butyric acid (GABA). Credited to LMU.
Home
Featured

Neurobiologists at LMU describe a feedback loop that modulates the processing of auditory signals in the brainstem in a frequency-dependent manner, and can lead to systematic errors in the subjective localization of sound sources.

Perception of acoustic signals depends on the transmission of nerve impulses from receptor cells in the inner ear via the auditory nerve to processing centers in the brain. One crucial function of the auditory system is the localization of sound sources in space. This is computed from differences in the intensity and time of arrival of the signals perceived by the two ears. The ipsilateral ear, being closer to the source, is stimulated more strongly, and perceives the signal sooner, than the contralateral ear. The latter parameter, the interaural time difference (ITD), is the dominant cue for localization.

In a study just published in Nature Neuroscience, a team of neurobiologists at LMU Munich, led by Professor Benedikt Grothe, describes a new neuronal circuit in the auditory cortex in the brainstem. The circuit originates in a bilateral nerve center known as the medial superior olive (MSO), where initial processing of ITDs takes place. The new work demonstrates that the sensitivity of MSO neurons to ITDs is modulated via a feedback loop that involves receptors for the inhibitory neurotransmitter gamma-amino butyric acid (GABA).

Localization is relative, not absolute

The auditory system localizes sound sources by comparing the levels of firing activity in the left and right MSOs. These in turn depend on differences in the arrival times of excitatory and inhibitory inputs from both brain hemispheres. Moreover, both types of input are modulated by activation of receptors for GABA. It turns out that the degree of modulation is determined by the overall level of activity induced by preceding stimuli (over a period of a few hundred milliseconds to a few seconds duration) and is highly dependent on sound frequency. If a sound emanates from a source located in the midline, the MSOs in both brain hemispheres are activated to the same degree. If the signal comes from the right, the left MSO is stimulated more strongly than the right. In response to a second signal, the feedback loop preferentially reduces the activity level in the dominant (left) MSO, thus briefly altering the ratio of the activities in left and right MSOs.

The researchers deduced that this effect should lead to a shift in the subjective perception of the location of the second signal, and that test subjects should make systematic errors in sound localization under these conditions. Subsequent experiments with human subjects confirmed that the expected errors indeed occur in precisely the manner predicted.

“The new circuit reveals that we make context-dependent and predictable errors in the absolute localization of sounds. This is because we can determine the locations of sounds only in relative sense,” says Grothe. And that is true of all mammals, not just humans. The latest results confirm similar findings in experimental animals previously reported by the LMU team.

The study was supported, in part, by funding provided for Collaborative Research Center (SFB) 870 on “Formation and Function of Neuronal Circuits in Sensory Systems”.