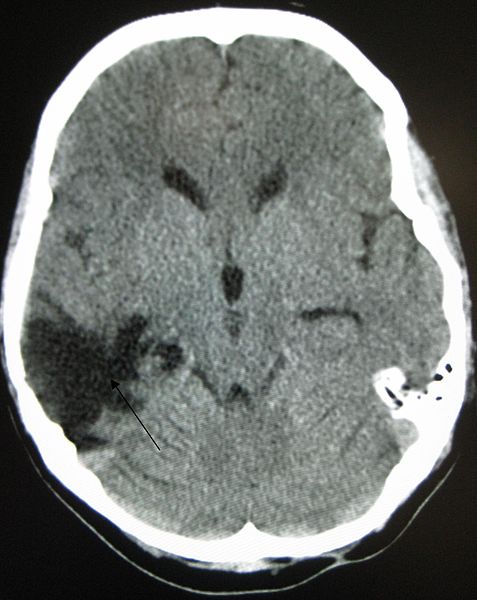 New findings show ongoing damage, or atrophy, in the brains of a number of people with moderate to severe TBI. This is a CT of the head years after a traumatic brain injury showing an empty space marked by the arrow were the damage occurred.
Home
Featured

For the first time, scientists at Toronto Rehab have found that in people with chronic moderate-severe traumatic brain injury (TBI), atrophy (shrinkage) in the brain may be countered by participating in environmental enrichment – increased physical, social and cognitive stimulation.

The paper, entitled “Environmental enrichment may protect against hippocampal atrophy in the chronic stages of traumatic brain injury,” was published today in the open-access journal Frontiers in Human Neuroscience. The principal investigator of this study is Dr. Robin Green, senior scientist and clinical neuropsychologist, Toronto Rehab, UHN and Canada Research Chair in Traumatic Brain Injury.

This research study builds on Dr. Green’s recent findings that suggest moderate-severe TBI may be a progressive neurological disorder – a whole new way of perceiving the condition. Only a handful of labs in the word are investigating this topic.

“The conventional wisdom about moderate-serious TBI is that there is neurological damage to the brain that manifests over the course of hours and days. Then, after a period of recovery – months to years – a plateau is reached where there are no further changes to the brain,” said Dr. Green.

Dr. Green’s recent findings show something else is going on. Using magnetic resonance imaging (MRI), Dr. Green and colleagues observed ongoing damage or atrophy in the brains of many people with moderate-severe TBI.

Exactly what’s causing this ― and whether it eventually stabilizes ― is unclear. At one level, inflammation, delayed apoptosis (programmed cell death) and excessive protein accumulation may play a role. What seems clearer is that the damaged areas affect healthy cells.

“What we believe is going on,” said Dr. Green, “is that after a serious brain injury, damaged tissue disconnects the healthy areas of the brain. Those healthy areas are under stimulated and, over time, deteriorate.”

To address long-term cognitive problems in this population, Dr. Green has focused her research on tailored treatments to offset this progressive deterioration.

“Many people with moderate-severe TBI are commonly unable to continue the same level of engagement in their work, school or social lives than they were before the injury,” said Dr. Green. “This decrease in environmental stimulation puts them at a greater risk of increased atrophy in the chronic stages of their brain injury.”

In the study, they found that all 30 patients with moderate-severe TBI showed a positive reaction to environmental enrichment. Those patients who reported greater amounts of environmental enrichment – for example, reading, problem solving exercises, puzzles, physical activity, socializing – at 5 months after their injury showed less shrinkage of the hippocampus (associated with memory functioning) from 5 to 28 months post-injury.

“Although the brains are showing negative changes, many patients are still showing recovery of their functioning in spite of it,” said Dr. Green. “If we are able to offset the negative brain changes through the treatments we are developing, we may be able to very significantly improve patients’ recovery and their ability to age well with brain injury.”

Brain injury touches all parts of society, from construction workers and military personnel to people who experience moderate-severe TBI at home or in the community. Dr. Green is also studying the troubling problem of multiple concussions (mild brain injuries).

Dr. Green is a Canada Research Chair (tier II) in traumatic brain injury and head of the Cognitive Neurorehabilitation Sciences Lab at Toronto Rehab. She is an Associate Professor in the Department of Psychiatry, Division of Neurosciences at the University of Toronto, and she funded by the Canadian Institutes of Health Research, Natural Sciences and Engineering Research Council, Ontario Neurotrauma Foundation, and the Physicians’ Services Incorporated.