Blood test may help predict whose multiple sclerosis will get worse 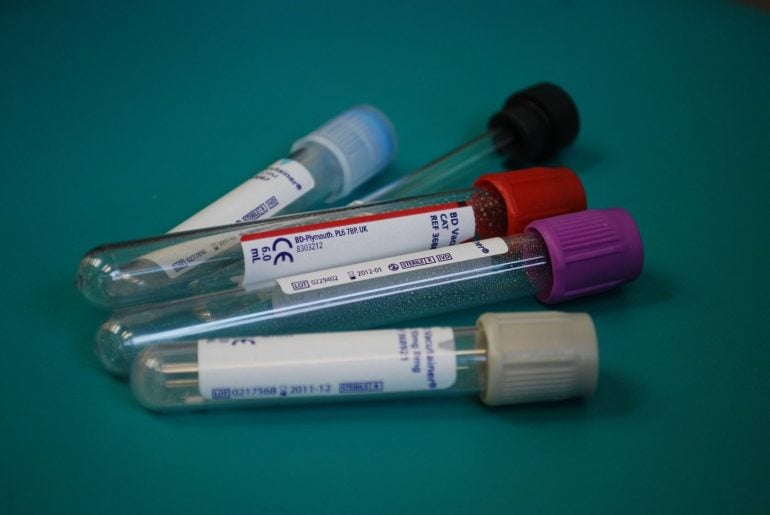 Summary: A new blood test can help predict which patients with multiple sclerosis will see a decline in their condition over 12 months. The test looks for a biomarker called neurofilament light chain, a protein that can be detected as nerve cells die. People with higher levels of the protein were 40-70% more likely to experience worsening symptoms over a year than those with lower levels.

A blood test may help predict which people with multiple sclerosis (MS) will get worse during the following year, according to a study published in the May 20, 2020, online issue of Neurology.

“In a disease like MS that is so unpredictable and varies so much from one person to the next, having a noninvasive blood test like this could be very valuable, especially since treatments are most effective in the earliest stages of the disease,” said study author Ali Manouchehrinia, PhD, of the Karolinska Institutet in Stockholm, Sweden.

The blood test looks for a biomarker called neurofilament light chain, a nerve protein that can be detected in the blood when nerve cells die.

The study involved 4,385 people with MS and 1,026 people matched for age and sex who did not have MS. The level of the biomarker in the blood was tested in all of the participants. The participants were followed to see which people with MS got worse during the following year and then which reached continued, increased levels of disability over a total of five years. They also looked at whether people with high levels of the protein were more likely to develop worsening of disability during the following years, and later a more serious stage of the disease, called secondary progressive MS.

The people with MS had an average of 11.4 picograms per milliliter (pg/ml) of the nerve protein in their blood compared to an average of 7.5 pg/ml for the people who did not have MS.

The people with MS with high levels of the protein were 40% to 70% more likely to have worsening disability during the next year than those with low levels of the protein. These results took into account other factors that could affect their risk of worsening disability, such as how long they had the disease and how often they were having relapses at the start of the study.

The researchers found that high protein levels were not consistently associated with a greater risk of more significant disability, defined as needing a cane or crutch to walk 100 meters, or with the risk of developing secondary progressive MS.

“These results suggest that elevated levels of these proteins measured early on in the course of the disease may help us to predict how the disease will develop and monitor how treatment is working,” Manouchehrinia said. “More research is needed before a blood test could be used routinely in the clinical setting, but our results are encouraging.”

He said that a limitation of the study was that the level of the nerve protein varied significantly and overlapped between the people with MS and the people without the disease, and it is likely that the levels are influenced by other factors, such as other medical conditions, that were not analyzed in the study.

The Power of a Genetic Isolate: Hundreds of Novel Genetic Discoveries From the FinnGen Study

Funding: The study was supported by the Swedish Municipality and County Council, Swedish National Board of Health and Welfare, Biogen, Genzyme, Novartis, Swedish Research Council, European Union and other foundations.

Original Research: The study will appear in Neurology.