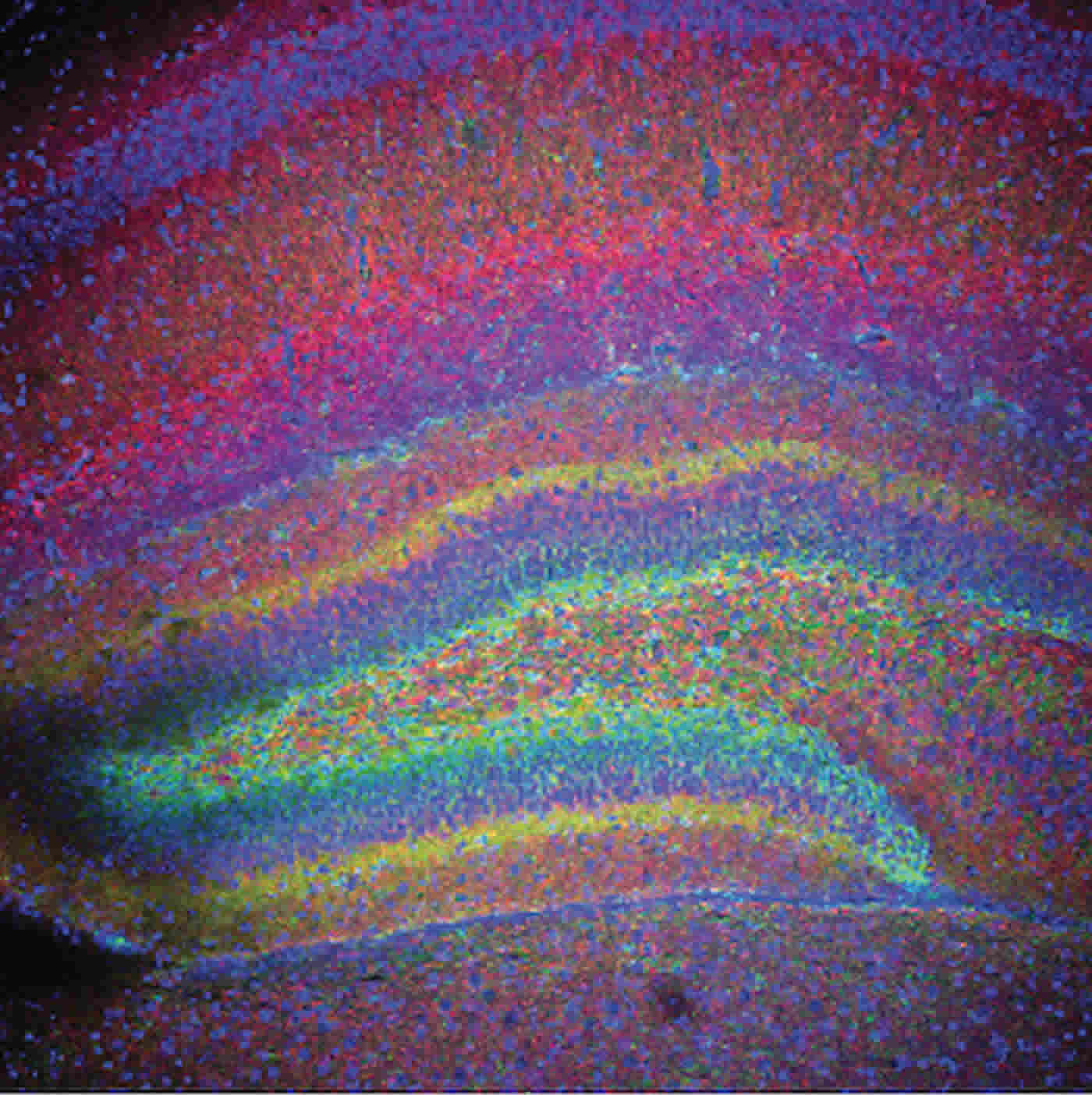 Green shows the activation of a protective protein (TrkB) after hypoxia-ischemia in the brain (hippocampus) of a newborn female mouse. This green signal is not seen in the brain of female mice that are lack the ERα protein. Credit: Pelin Cengiz.

Why Female Newborns Are Better Protected From Brain Injury

Each year, thousands of newborn babies suffer complications during pregnancy or birth that deprive their brains of oxygen and nutrient-rich blood and result in brain injury. This deprivation results in hypoxic ischemic encephalopathy (HIE), which can lead to long-term neurological issues such as learning disabilities, cerebral palsy or even death.

Researchers have known for some time that male infants are more vulnerable to HIE than females, but why this gender difference exists has remained a mystery.

In a study published this week in the journal eNeuro, researchers at the Waisman Center at the University of Wisconsin—Madison, led by Pelin Cengiz, associate professor in the Department of Pediatrics, show that a particular protein found in the brains of both male and female mice is present at higher levels in females, which offers them stronger protection against this type of brain injury.

“People often think that biological sex differences start to arise only after puberty, but they actually start in the womb and persist until the tomb,” says Cengiz, paraphrasing a 1999 statement by the Institute of Medicine. “So, treatment approaches that may work for newborn boys may not work for girls, and vice versa. We need to get it right to develop effective therapies.”

The protein is called estrogen receptor α, or ERα for short, and the researchers set out to learn how it confers its gender-specific protective effects.

Their first clue lay with a particular drug known to protect female but not male newborn mice from the effects of brain injury caused by HIE. The drug works by turning on a cascade of protective effects in the brain in response to oxygen deprivation and reduced blood flow.

The team learned that, like the drug, ERα also causes a similar cascade in infant mice and the protein is actually required for the drug to be effective. The researchers found that female mice lacking the ERα protein could not activate protective factors following HIE, even when treated with the drug.

When the researchers studied the brains of male and female mice that could make the ERα protein, they learned that levels of this protective protein were significantly higher in female compared to male brains following oxygen deprivation and reduced blood flow.

“Under normal circumstances the brains of male and female mice have similar amounts of ERα,” says Cengiz, who is now exploring why ERα levels increase in female but not male brains after HIE.

Understanding the mechanism of how female brains are more resistant to damage from oxygen deprivation and reduced blood flow is a first step toward helping newborns of both sexes recover after suffering from HIE and live functional lives. It could also lead to more effective therapies and treatments for both genders, Cengiz says.

But more work needs to be done. For one thing, Cengiz and her colleagues looked at only the hippocampus region of the brain, which is linked to memory and learning and is involved in other neurological roles. The hippocampus is also a site where new neurons are continually generated throughout the lifespan.

“We focused on the hippocampus because we see memory and learning disabilities in many of the children affected by HIE,” says Cengiz, “and it is also the part of the brain that is most often injured after HIE.”

While it could be years before human babies benefit, each molecular mystery researchers unravel provides a potential new road to developing new therapies, Cengiz says, noting: “We are driven by the desire to improve outcomes for all newborns who suffer brain injury from HIE.”

Male neonate brains are more susceptible to the effects of perinatal asphyxia resulting in hypoxia and ischemia (HI)-related brain injury. The relative resistance of female neonatal brains to adverse consequences of HI suggests that there are sex-specific mechanisms that afford females greater neuroprotection and/or facilitates recovery post-HI. We hypothesized that HI preferentially induces estrogen receptor α (ERα) expression in female neonatal hippocampi and that ERα is coupled to Src family kinase (SFK) activation that in turn augments phosphorylation of the TrkB and thereby results in decreased apoptosis. After inducing the Vannucci’s HI model on P9 (C57BL/6J) mice, female and male ERα wild-type (ERα+/+) or ERα null mutant (ERα−/−) mice received vehicle control or the selective TrkB agonist 7,8-dihydroxyflavone (7,8-DHF). Hippocampi were collected for analysis of mRNA of ERα and BDNF, protein levels of ERα, p-TrkB, p-src, and cleaved caspase 3 (c-caspase-3) post-HI. Our results demonstrate that: (1) HI differentially induces ERα expression in the hippocampus of the female versus male neonate, (2) src and TrkB phosphorylation post-HI is greater in females than in males after 7,8-DHF therapy, (3) src and TrkB phosphorylation post-HI depend on the presence of ERα, and (4) TrkB agonist therapy decreases the c-caspase-3 only in ERα+/+ female mice hippocampus. Together, these observations provide evidence that female-specific induction of ERα expression confers neuroprotection with TrkB agonist therapy via SFK activation and account for improved functional outcomes in female neonates post-HI.