Signs of Memory Problems May Instead Be Symptoms of Hearing Loss

Summary: Researchers report signs of memory problems in old age may be a result of hearing loss and not a neurodegenerative disease.

What might appear to be signs of memory loss could actually point to hearing issues, says Dr. Susan Vandermorris, one of the study’s authors and a clinical neuropsychologist at Baycrest.

A recent Baycrest study, published in the Canadian Journal on Aging, found that the majority (56 per cent) of participants being evaluated for memory and thinking concerns and potential brain disorders had some form of mild to severe hearing loss, but only about 20 per cent of individuals used hearing aids. Among the participants, a quarter of them did not show any signs of memory loss due to a brain disorder.

“We commonly see clients who are worried about Alzheimer’s disease because their partner complains that they don’t seem to pay attention, they don’t seem to listen or they don’t remember what is said to them,” says Dr. Vandermorris. “Sometimes addressing hearing loss may mitigate or fix what looks like a memory issue. An individual isn’t going to remember something said to them if they didn’t hear it properly.”

“Some people may be reluctant to address hearing loss, but they need to be aware that hearing health is brain health and help is available,” she adds.

The study analyzed results from 20 individuals who were receiving a neuropsychological assessment at Baycrest. Participants completed a hearing screening test after their cognitive evaluation.

Neuropsychologists were privy to hearing test results after their initial assessment, which altered some of their recommendations. For example, some clients were referred to a hearing clinic for a full audiology assessment or to consider using a hearing aid, as well as provided education on hearing loss and communication.

“Since hearing loss has been identified as a leading, potentially modifiable risk factor for dementia, treating it may be one way people can reduce the risk,” says Marilyn Reed, another author on the study and practice advisor with Baycrest’s audiology department. “People who can’t hear well have difficulty communicating and tend to withdraw from social activities as a way of coping. This can lead to isolation and loneliness, which can impact cognitive, physical and mental health.”

“We are starting to learn more about the important role hearing plays in the brain health of our aging population,” says Dr. Kate Dupuis, lead author on the study, a former postdoctoral fellow at Baycrest, clinical neuropsychologist and Schlegel Innovation Leader at the Sheridan Centre for Elder Research. “In order to provide the best care to our older clients, it is imperative that neuropsychologists and hearing care professionals work together to address the common occurrence of both cognitive and hearing loss in individuals.” 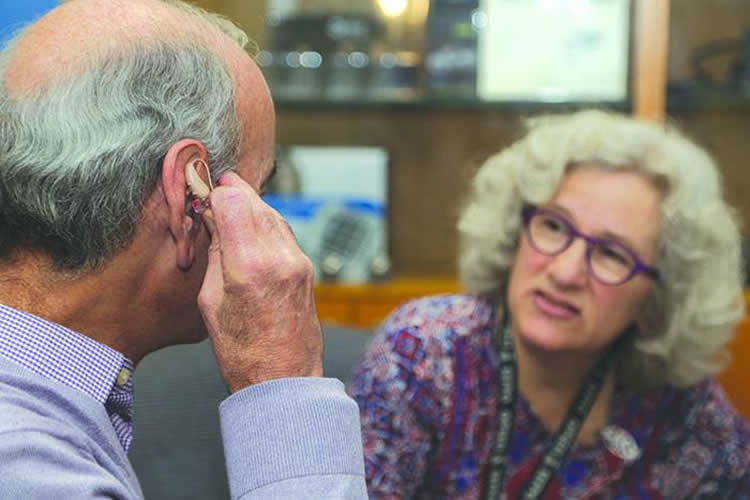 This is an older adult trying on a hearing aid. NeuroscienceNews.com image is credited to Baycrest.

Since the studies, Baycrest’s Neuropsychology and Cognitive Health Program and Hearing Services have incorporated general screening for hearing and memory issues into their assessments, as well as provided educational materials to clients.

Next steps for the study will involve optimizing screening strategies for hearing loss in memory assessments and ongoing interprofessional collaborations to create educational tools that counsel clients about the relationship between hearing, memory and brain health.

Funding: The study was made possible with support from the neuropsychology and cognitive health and audiology programs at Baycrest. The research team included Iris Yusupov, Dr. Kelly Murphy, Dr. Dmytro Rewilak and Dr. Kathryn Stokes.