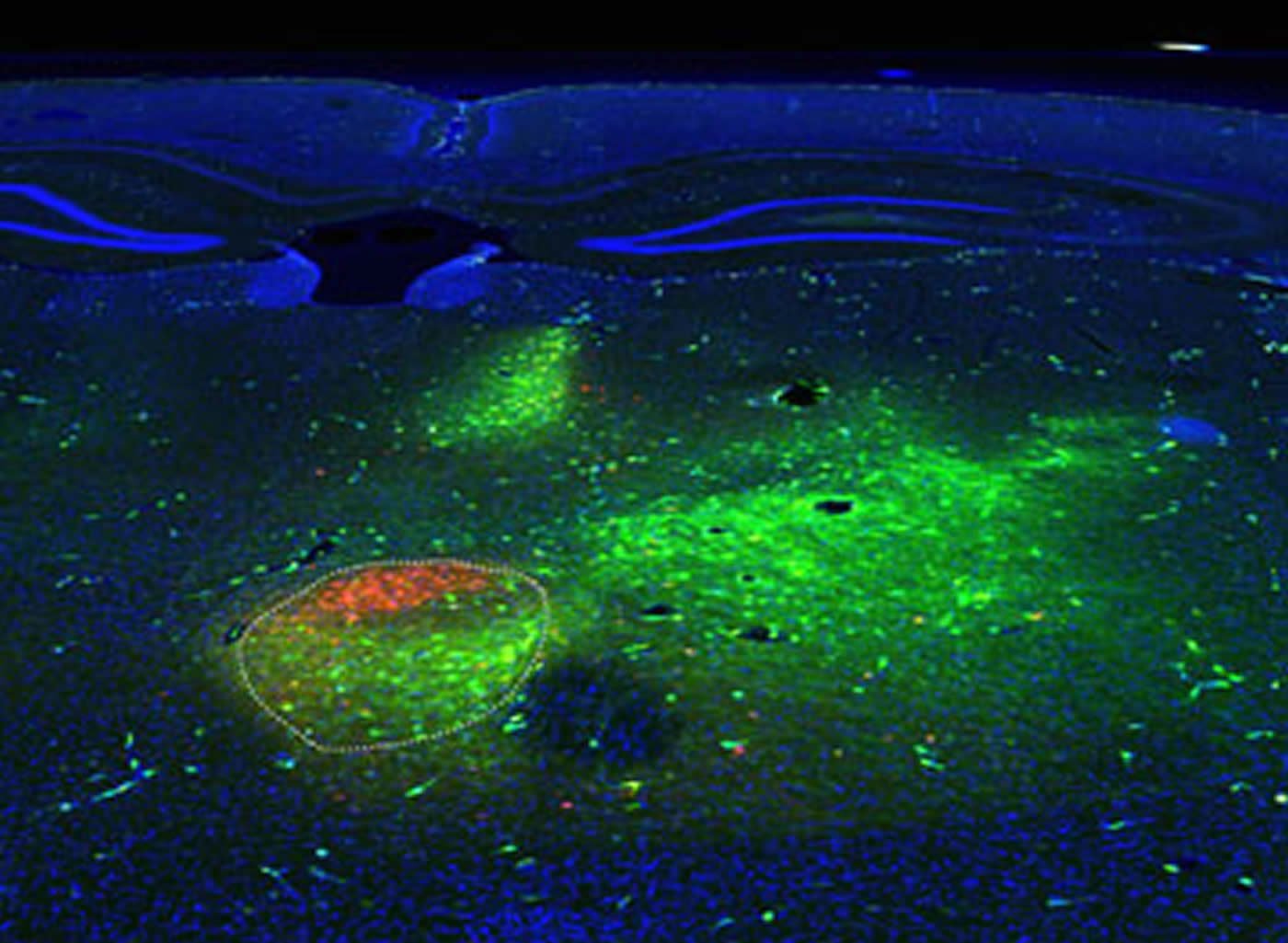 To visualize the neural pathways, two markers (red and green) were applied to two regions of the orbitofrontal cortex. These compounds then migrated, accumulating in the thalamic neurons. Dense labeling with the two tracers is visible in the submedius thalamic nucleus (delimited by a dotted line). Credit: Fabien Alcaraz.

How The Brain Makes Decisions

When faced with a change to our environment, we have to make appropriate decisions, which usually involves the orbitofrontal cortex. Yet unexpectedly, scientists at the Institut de Neurosciences Cognitives et Intégratives d’Aquitaine (INCIA, CNRS/Université de Bordeaux) have discovered that a brain region located in the thalamus also plays a crucial role in using these evolved skills. Tested in the rat, this work is published on 23 September 2015 in The Journal of Neuroscience.

All living organisms must take appropriate decisions to meet their own needs. In particular, the ability to take account of abrupt environmental changes represents a significant challenge for the survival of a species. Such decision-making is considered as an evolved cognitive function. It involves the orbitofrontal cortex, one of the most developed brain structures, known to perform decision-making processes.

The team then tested the role of these two brain structures (the submedius thalamic nucleus and orbitofrontal cortex) in decision-making and adaptive behavior. To achieve this, they studied three groups of rats: the first presented lesions to the orbitofrontal cortex, the second had lesions on the submedius nucleus and the third was made up of lesion-free control animals. The objective was to test their ability to establish a link between an auditory cue and obtaining a food reward.

The experiment was organized in two phases. The initial learning phase allowed the animals to learn that two different sounds (S1 and S2) each signaled a specific food reward. The three groups of animals thus visited the food dispenser as soon as an auditory stimulus was perceived. The lesions did not prevent the animals from learning that an auditory stimulus predicts a reward. During the second phase, the procedure remained unchanged for the first cue, but for S2, the scientists distributed food rewards during, and mostly outside, cue test periods. This sound thus lost its predictive value and lesion-free animals started to take no account of the S2 auditory stimulus, only visiting the dispenser when they heard S1. On the other hand, animals with a lesion – of either the orbitofrontal cortex or the submedius thalamic nucleus – proved incapable of making this distinction, and thus of adapting.

This study therefore identified the existence of a circuit between the thalamus and the cortex, which proved crucial to adaptive decision-making. The originality of this discovery lies in the key role that scientists attribute to the submedius thalamic nucleus, a structure hitherto poorly known in the field of adaptive behavior. These findings suggest that numerous functional circuits underlying this type of behavior may involve a contribution from the thalamus. The team is now planning to explore these “thalamocortical” circuits, whose understanding could shed light on numerous diseases, such as schizophrenia or addiction.

Brain Differences in Pain Modulation in People With Self-Injury Behavior

Flexible use of predictive cues beyond the orbitofrontal cortex: role of the submedius thalamic nucleus

The orbitofrontal cortex (OFC) is known to play a crucial role in learning the consequences of specific events. However, the contribution of OFC thalamic inputs to these processes is largely unknown. Using a tract-tracing approach, we first demonstrated that the submedius nucleus (Sub) shares extensive reciprocal connections with the OFC. We then compared the effects of excitotoxic lesions of the Sub or the OFC on the ability of rats to use outcome identity to direct responding. We found that neither OFC nor Sub lesions interfered with the basic differential outcomes effect. However, more specific tests revealed that OFC rats, but not Sub rats, were disproportionally relying on the outcome, rather than on the discriminative stimulus, to guide behavior, which is consistent with the view that the OFC integrates information about predictive cues. In subsequent experiments using a Pavlovian contingency degradation procedure, we found that both OFC and Sub lesions produced a severe deficit in the ability to update Pavlovian associations. Altogether, the submedius therefore appears as a functionally relevant thalamic component in a circuit dedicated to the integration of predictive cues to guide behavior, previously conceived as essentially dependent on orbitofrontal functions.

SIGNIFICANCE STATEMENT In the present study, we identify a largely unknown thalamic region, the submedius nucleus, as a new functionally relevant component in a circuit supporting the flexible use of predictive cues. Such abilities were previously conceived as largely dependent on the orbitofrontal cortex. Interestingly, this echoes recent findings in the field showing, in research involving an instrumental setup, an additional involvement of another thalamic nuclei, the parafascicular nucleus, when correct responding requires an element of flexibility (Bradfield et al., 2013a). Therefore, the present contribution supports the emerging view that limbic thalamic nuclei may contribute critically to adaptive responding when an element of flexibility is required after the establishment of initial learning.