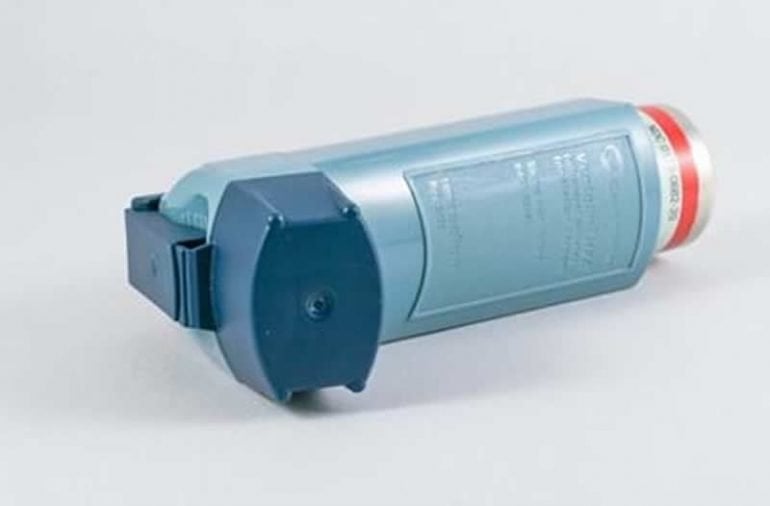 A salbutamol asthma inhaler. Image is credited to Lancaster University.

Summary: Salbutamol, a common asthma medication, shows potential for the treatment of Alzheimer’s disease. The drug is effective at reducing the accumulation of insoluble fibers of the tau protein.

A new study reveals that the common asthma drug salbutamol may offer potential as a treatment for Alzheimer’s disease.

Alzheimer’s disease is the most common form of dementia, affecting 47 million people worldwide and its prevalence is expected to triple to more than 130 million cases by 2050.

No effective treatments that cure the disease or slow down its progression have been discovered. However, this new early-stage study has revealed that repurposing an existing drug, salbutamol, offers significant potential as a low cost and rapid response option.

Extensive analytical in-vitro experiments conducted by the research team show that salbutamol is effective at reducing the accumulation of insoluble fibres of the tau protein – which is found in the brains of people with Alzheimer’s disease. These microscopic fibres accumulate into neurofibrillary tangles and can cause neuron destabilisation, brain cell death, and are a key characteristic of the disease’s progression.

Much Alzheimer’s disease research has focused on the build-up of amyloid plaques, caused by misfolding of the amyloid-β protein. However, because of disappointing results from numerous therapies targeting Aβ aggregation, more attention is shifting towards tau.

This study, led by researchers at Lancaster University, used a new automated ‘high throughput’ screening approach to study the structure of the misfolding tau protein with a special analytical technique called ‘Synchrotron Radiation Circular Dichroism’ (SRCD) at Diamond Light Source, the UK national synchrotron light source in Oxfordshire. With this powerful technique they were able to look at a selection of more than 80 existing compounds and drugs simultaneously to determine their effectiveness at preventing the formation of tau fibrils.

This method confirmed the compound epinephrine, more commonly known as adrenaline, was effective at stabilising the tau proteins and preventing the formation of tau tangles. However, our bodies do not easily absorb epinephrine and it rapidly gets metabolised, so the scientists then looked at a range of readily available compounds with similar chemical structures. This search revealed four current drugs as possible candidates – etamivan, fenoterol, dobutamine and salbutamol.

Etaminvan and fenoterol were found to have little effect on the assembly of tau tangles. Dobutamine, which is used for the rapid treatment of heart attacks and heart failure, was found to have some benefit. However, because its effects are very short-lived, and because it needs to be administered intravenously, it is not ideal as a basis for treatment of Alzheimer’s disease.

The researchers believe that salbutamol interacts with an early stage of tau fibril formation, reducing their ability to form an initial nucleus which drives the aggregation process.

Because it is easily ingested, absorbed into the brain, and remains in the body for several hours, salbutamol has attractive properties as a research avenue for potential new treatment for Alzheimer’s.

Dr David Townsend, of Lancaster university and lead author of the research, said: “Our work highlights the potential impact of repurposing drugs for secondary medical uses, by discovering a novel therapeutic strategy that impedes the molecular pathology of Alzheimer’s disease, and which may have otherwise gone unstudied.

“Salbutamol has already undergone extensive human safety reviews, and if follow up research reveals an ability to impede Alzheimer’s disease progression in cellular and animal models, this drug could offer a step forward, whilst drastically reducing the cost and time associated with typical drug development.”

Professor David Middleton, co-author of the research, said: “This work is in the very early stages and we are some way from knowing whether or not salbutamol will be effective at treating Alzheimer’s disease in human patients. However, our results justify further testing of salbutamol, and similar drugs, in animal models of the disease and eventually, if successful, in clinical trials.”

Disrupted Biochemical Pathway in the Brain Linked to Bipolar Disorder

The researchers say that current asthma inhalers result in only a small amount of salbutamol reaching the brain and so, if further research is successful, a new delivery method would also need to be developed. They add that future research could also focus on other asthma drugs that are chemically similar to salbutamol, but which circulate in the bloodstream for much longer.

Potential drug treatments for Alzheimer’s disease (AD) may be found by identifying compounds that block the assembly of the microtubule-associated protein tau into neurofibrillar tangles associated with neuron destabilisation and cell death. Here, a small library of structurally diverse compounds was screened in vitro for the ability to inhibit tau aggregation, using high-throughput synchrotron radiation circular dichroism (HT-SRCD) as a novel tool to monitor the structural changes in the protein as it assembles into filaments. The catecholamine epinephrine was found to be the most effective tau aggregation inhibitor of all 88 compounds screened. Subsequently, we tested chemically-similar phenolamine drugs from the β-adrenergic receptor (βAR) agonist class, using conventional circular dichroism spectroscopy, thioflavin T fluorescence and transmission electron microscopy. Two compounds, salbutamol and dobutamine, used widely in the treatment of respiratory and cardiovascular disease, impede the aggregation of tau in vitro. Dobutamine reduces both the rate and yield of tau filament formation over 24 hours, although it has little effect on the structural transition of tau into β-sheet structures over 24 hours. Salbutamol also reduces the yield and rate of filament formation, and additionally inhibits tau’s structural change into β-sheet rich aggregates. Salbutamol has a good safety profile and a half-life that facilitates permeation through the blood brain barrier and could represent an expediated approach to developing AD therapeutics. These results provide the motivation for in vivo evaluation of pre-existing β-adrenergic receptor agonists as a potential therapy for AD through the reduction of tau deposition in AD.

Vitamins for Your Neurons