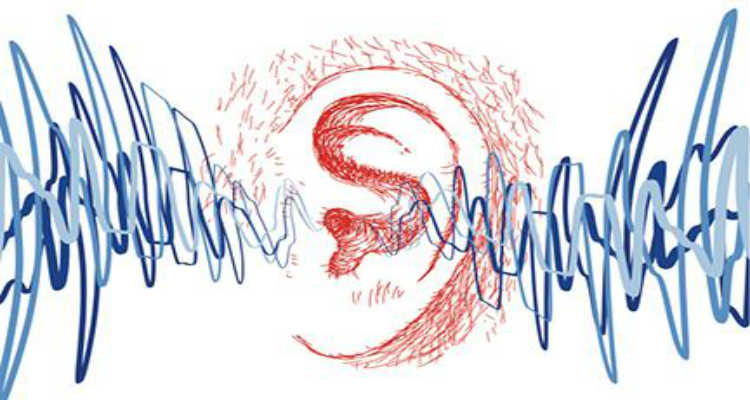 Adapted from the University of Michigan press release.

Disruption of timing from sensory nerves underlies “ringing in the ears” that plagues millions, including many veterans.

For tens of millions of Americans, there’s no such thing as the sound of silence. Instead, even in a quiet room, they hear a constant ringing, buzzing, hissing, humming or other noise in their ears that isn’t real. Called tinnitus, it can be debilitating and life-altering.

Now, University of Michigan Medical School researchers report new scientific findings that help explain what is going on inside these unquiet brains.

The discovery reveals an important new target for treating the condition. Already, the U-M team has a patent pending and device in development based on the approach.

The critical findings are published online in the prestigious Journal of Neuroscience. Though the work was done in animals, it provides a science-based, novel approach to treating tinnitus in humans.

Susan Shore, Ph.D., the senior author of the paper, explains that her team has confirmed that a process called stimulus-timing dependent multisensory plasticity is altered in animals with tinnitus – and that this plasticity is “exquisitely sensitive” to the timing of signals coming in to a key area of the brain.

That area, called the dorsal cochlear nucleus, is the first station for signals arriving in the brain from the ear via the auditory nerve. But it’s also a center where “multitasking” neurons integrate other sensory signals, such as touch, together with the hearing information.

She explains that in tinnitus, some of the input to the brain from the ear’s cochlea is reduced, while signals from the somatosensory nerves of the face and neck, related to touch, are excessively amplified.

“It’s as if the signals are compensating for the lost auditory input, but they overcompensate and end up making everything noisy,” says Shore.

The new findings illuminate the relationship between tinnitus, hearing loss and sensory input and help explain why many tinnitus sufferers can change the volume and pitch of their tinnitus’s sound by clenching their jaw, or moving their head and neck.

But it’s not just the combination of loud noise and overactive somatosensory signals that are involved in tinnitus, the researchers report.

It’s the precise timing of these signals in relation to one another that prompt the changes in the nervous system’s plasticity mechanisms, which may lead to the symptoms known to tinnitus sufferers.

Shore and her colleagues, including former U-M biomedical engineering graduate student and first author Seth Koehler, Ph.D., hope their findings will eventually help many of the 50 million people in the United States and millions more worldwide who have the condition, according to the American Tinnitus Association. They hope to bring science-based approaches to the treatment of a condition for which there is no cure – and for which many unproven would-be therapies exist.

Tinnitus especially affects baby boomers, who, as they reach an age at which hearing tends to diminish, increasingly experience tinnitus. The condition most commonly occurs with hearing loss, but can also follow head and neck trauma, such as after an auto accident, or dental work.

Loud noises and blast forces experienced by members of the military in war zones also can trigger the condition. Tinnitus is a top cause of disability among members and veterans of the armed forces.

Researchers still don’t understand what protective factors might keep some people from developing tinnitus, while others exposed to the same conditions experience tinnitus.

In this study, only half of the animals receiving a noise-overexposure developed tinnitus. This is similarly the case with humans — not everyone with hearing damage ends up with tinnitus. An important finding in the new paper is that animals that did not get tinnitus showed fewer changes in their multisensory plasticity than those with evidence of tinnitus. In other words, their neurons were not hyperactive.

Shore is now working with other students and postdoctoral fellows to develop a device that uses the new knowledge about the importance of signal timing to alleviate tinnitus. The device will combine sound and electrical stimulation of the face and neck in order to return to normal the neural activity in the auditory pathway.

“If we get the timing right, we believe we can decrease the firing rates of neurons at the tinnitus frequency, and target those with hyperactivity,” says Shore. She and her colleagues are also working to develop pharmacological manipulations that could enhance stimulus timed plasticity by changing specific molecular targets.

But, she notes, any treatment will likely have to be customized to each patient, and delivered on a regular basis. And some patients may be more likely to derive benefit than others.

Notes about this neurology and tinnitus research

The research was supported by National Institutes of Health grants DC004825 and P30 DC05188. Shore’s device project is funded by the Coulter Translational Research Partnership, which is supported by the Wallace H. Coulter Foundation and the University of Michigan.