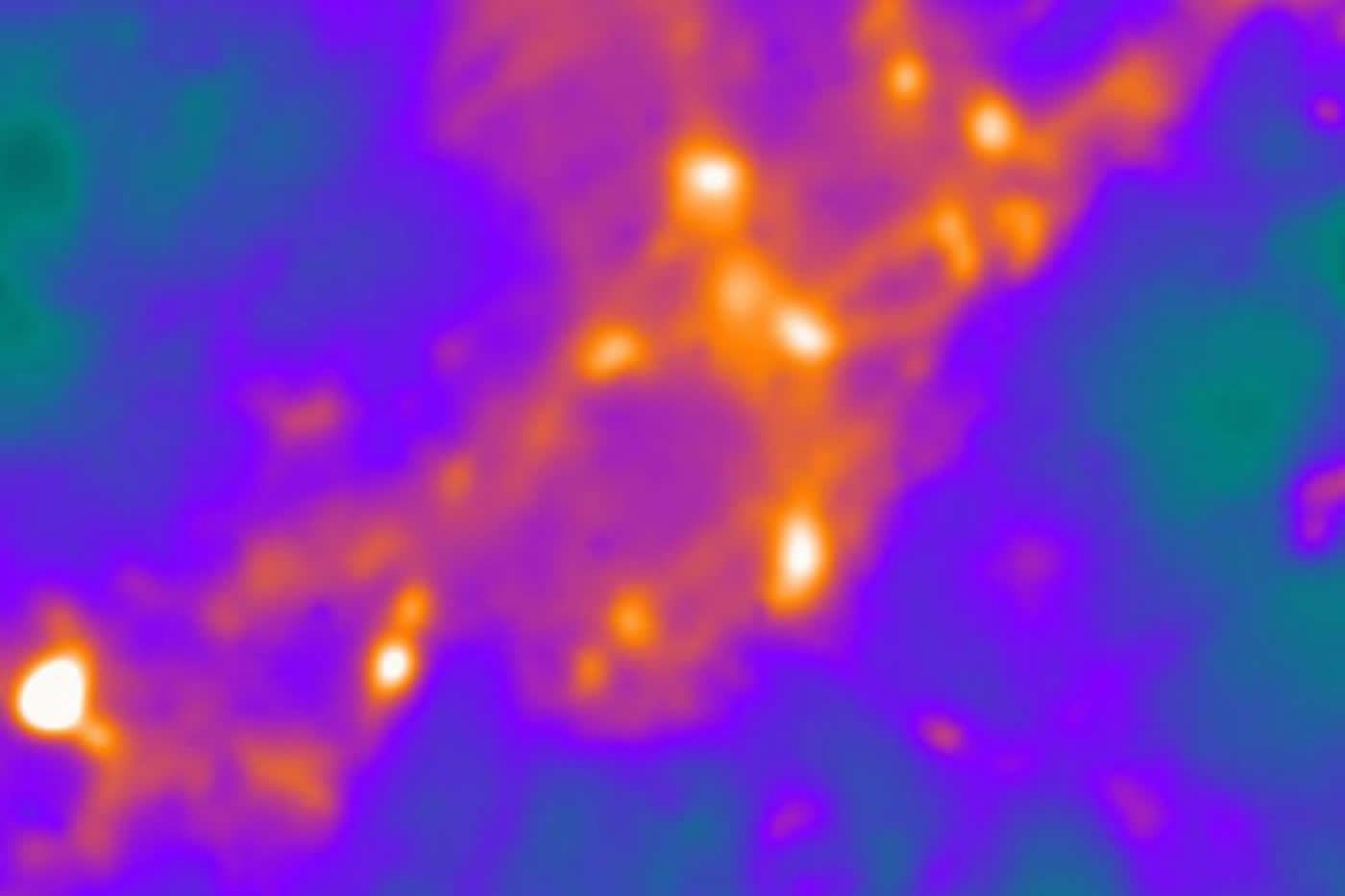 The brain hosts an extraordinarily complex network of interconnected nerve cells that are constantly exchanging electrical and chemical signals at speeds difficult to comprehend. Now, scientists at Washington University School of Medicine in St. Louis report they have been able to achieve -- with a custom-built microscope -- the closest view yet of living nerve synapses. Nerve synapses are the junctions between neurons that govern how these cells communicate. The researchers have been able to achieve even closer looks than shown, however this image shows multiple working nerve synapses. NeuroscienceNews.com image is credited to Dario Maschi.

A Closer Look at a Living Nerve Synapse

Summary: A new, custom built microscope allows neuroscientists a closer look at the detailed workings of a synapse.

The brain hosts an extraordinarily complex network of interconnected nerve cells that are constantly exchanging electrical and chemical signals at speeds difficult to comprehend. Now, scientists at Washington University School of Medicine in St. Louis report they have been able to achieve — with a custom-built microscope — the closest view yet of living nerve synapses.

Understanding the detailed workings of a synapse — the junction between neurons that govern how these cells communicate with each other — is vital for modeling brain networks and understanding how diseases as diverse as depression, Alzheimer’s or schizophrenia may affect brain function, according to the researchers.

The study is published March 23 in the journal Neuron.

Studying active rat neurons, even those growing in a dish, is a challenge because they are so small. Further, they move, making it difficult to keep them in focus at high magnifications under a light microscope.

“Synapses are little nanoscale machines that transmit information,” said senior author Vitaly A. Klyachko, PhD, an associate professor of cell biology and physiology at the School of Medicine. “They’re very difficult to study because their scale is below what conventional light microscopes can resolve. So what is happening in the active zone of a synapse looks like a blur.

“To remedy this, our custom-built microscope has a very sensitive camera and is extremely stable at body temperatures, but most of the novelty comes from the analysis of the images,” he added. “Our approach gives us the ability to resolve events in the synapse with high precision.”

Until now, close-up views of the active zone have been provided by electron microscopes. While offering resolutions of mere tens of nanometers — about 1,000 times thinner than a human hair and smaller — electron microscopes can’t view living cells. To withstand bombardment by electrons, samples must be fixed in an epoxy resin or flash frozen, cut into extremely thin slices and coated in a layer of metal atoms.

“Most of what we know about the active zone is from indirect studies, including beautiful electron microscopy images,” said Klyachko, also an associate professor of biomedical engineering at the School of Engineering & Applied Science. “But these are static pictures. We wanted to develop a way to see the synapse function.”

“One of the most fundamental questions is: Are there many places at the active zone where a vesicle can release its neurotransmitters into the gap, or is there only one?” Klyachko said. “A lot of indirect measurements suggested there might be only one, or maybe two to three, at most.”

In other words, if the active zone could be compared to a shower head, the question would be whether it functions more as a single jet or as a rain shower.

Klyachko and first author Dario Maschi, PhD, a postdoctoral researcher, showed that the active zone is more of a rain shower. But it’s not a random shower; there are about 10 locations dotted across the active zone that are reused too often to be left to chance. They also found there is a limit to how quickly these sites can be reused — about 100 milliseconds must pass before an individual site can be used again. And at higher rates of vesicle release, the site usage tends to move from the center to the periphery of the active zone.

“Neurons often fire at 50 to 100 times per second, so it makes sense to have multiple sites,” Klyachko said. “If one site has just been used, the active zone can still be transmitting signals through its other sites.

“We’re studying the most basic machinery of the brain,” he added. “Our data suggest these machines are extremely fine-tuned — even subtle modulations may lead to disease. But before we can study disease, we need to understand how healthy synapses work.”

Funding: This work was supported in part by the Esther A. & Joseph Klingenstein Fund, the Whitehall Foundation and the McDonnell Center at Washington University.

Coronavirus: The Pandemic Is Changing Our Brains