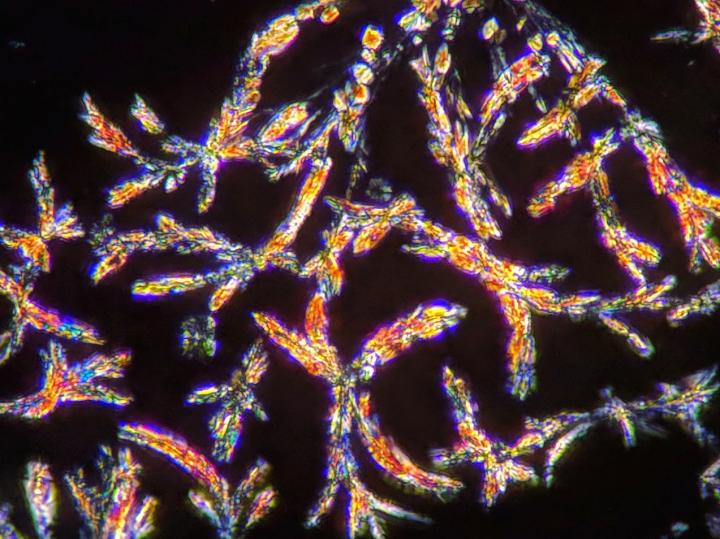 Crystals of N,N¬-dimethyltryptamine (DMT) imaged with polarizing microscopy. DMT is the active ingredient in the hallucinogenic drug ayahuasca. New studies from UC Davis using a rat model show that 'microdosing' or taking small doses of a psychedelic drug that do not cause hallucinations may have beneficial effects for mental health. CREDIT: Lindsay Cameron and Lee Dunlap
Home
Featured

Summary: Research on rats suggests microdosing DMT may have beneficial effects for those suffering depression and anxiety, but also shows probable adverse changes in neuronal structures and metabolism. As is usually the case, more research is necessary to better understand the positive and negative effects.

The growing popularity of microdosing — taking tiny amounts of psychedelic drugs to boost mood and mental acuity — is based on anecdotal reports of its benefits. Now, a study in rats by researchers at the University of California, Davis suggests microdosing can provide relief for symptoms of depression and anxiety, but also found potential negative effects. The work is published March 4 in the journal ACS Chemical Neuroscience.

“Prior to our study, essentially nothing was known about the effects of psychedelic microdosing on animal behaviors,” said David Olson, assistant professor in the UC Davis departments of Chemistry and of Biochemistry and Molecular Medicine, who leads the research team. “This is the first time anyone has demonstrated in animals that psychedelic microdosing might actually have some beneficial effects, particularly for depression or anxiety. It’s exciting, but the potentially adverse changes in neuronal structure and metabolism that we observe emphasize the need for additional studies.”

Olson’s group microdosed male and female rats with DMT, short for N,N-dimethyltryptamine. A psychedelic compound found in ayahuasca tea, DMT’s molecular structure is embedded within the structures of popular microdosing drugs such as LSD and psilocybin. The researchers administered one-tenth of the estimated hallucinogenic dose in rats (1 milligram per kilogram of body weight) every third day for two months. Although there is no well-established definition of what constitutes a microdose, people who microdose tend to follow a similar schedule, taking one-tenth of a “trip” dose every three days. The rats were treated for two weeks before beginning behavioral tests relevant to mood, anxiety and cognitive function, and tests were completed during the two-day period between doses.

Olson’s group found DMT microdosing helped rats to overcome a “fear response” in a test considered to be a model of anxiety and post-traumatic stress disorder (PTSD) in humans. The researchers also documented reduced immobility in an experiment that measures the effectiveness of antidepressant compounds. Less immobility is associated with antidepressant effects. In tests of cognitive function and sociability, the UC Davis researchers did not find any obvious impairments or improvements, which contrasts with human anecdotal reports.

Despite the potential adverse effects of microdosing, the findings mean that it’s possible to decouple the hallucinogenic effects from the therapeutic properties of these compounds.

“Our study demonstrates that psychedelics can produce beneficial behavioral effects without drastically altering perception, which is a critical step towards producing viable medicines inspired by these compounds,” Olson said.

About this microdosing research article

Author Contributions
D.E.O. conceived the project and was responsible for the overall experimental design. L.P.C. performed the Golgi–Cox staining and gene expression experiments and analyzed all data presented. C.J.B. performed the rat behavioral experiments. B.C.D. and O.F. performed the metabolomics study. L.P.C. and D.E.O. wrote the manuscript with input from all authors.

D.E.O. is a co-founder of Delix Therapeutics, Inc.

Drugs capable of ameliorating symptoms of depression and anxiety while also improving cognitive function and sociability are highly desirable. Anecdotal reports have suggested that serotonergic psychedelics administered in low doses on a chronic, intermittent schedule, so-called “microdosing”, might produce beneficial effects on mood, anxiety, cognition, and social interaction. Here, we test this hypothesis by subjecting male and female Sprague Dawley rats to behavioral testing following the chronic, intermittent administration of low doses of the psychedelic N,N-dimethyltryptamine (DMT). The behavioral and cellular effects of this dosing regimen were distinct from those induced following a single high dose of the drug. We found that chronic, intermittent, low doses of DMT produced an antidepressant-like phenotype and enhanced fear extinction learning without impacting working memory or social interaction. Additionally, male rats treated with DMT on this schedule gained a significant amount of body weight during the course of the study. Taken together, our results suggest that psychedelic microdosing may alleviate symptoms of mood and anxiety disorders, though the potential hazards of this practice warrant further investigation.