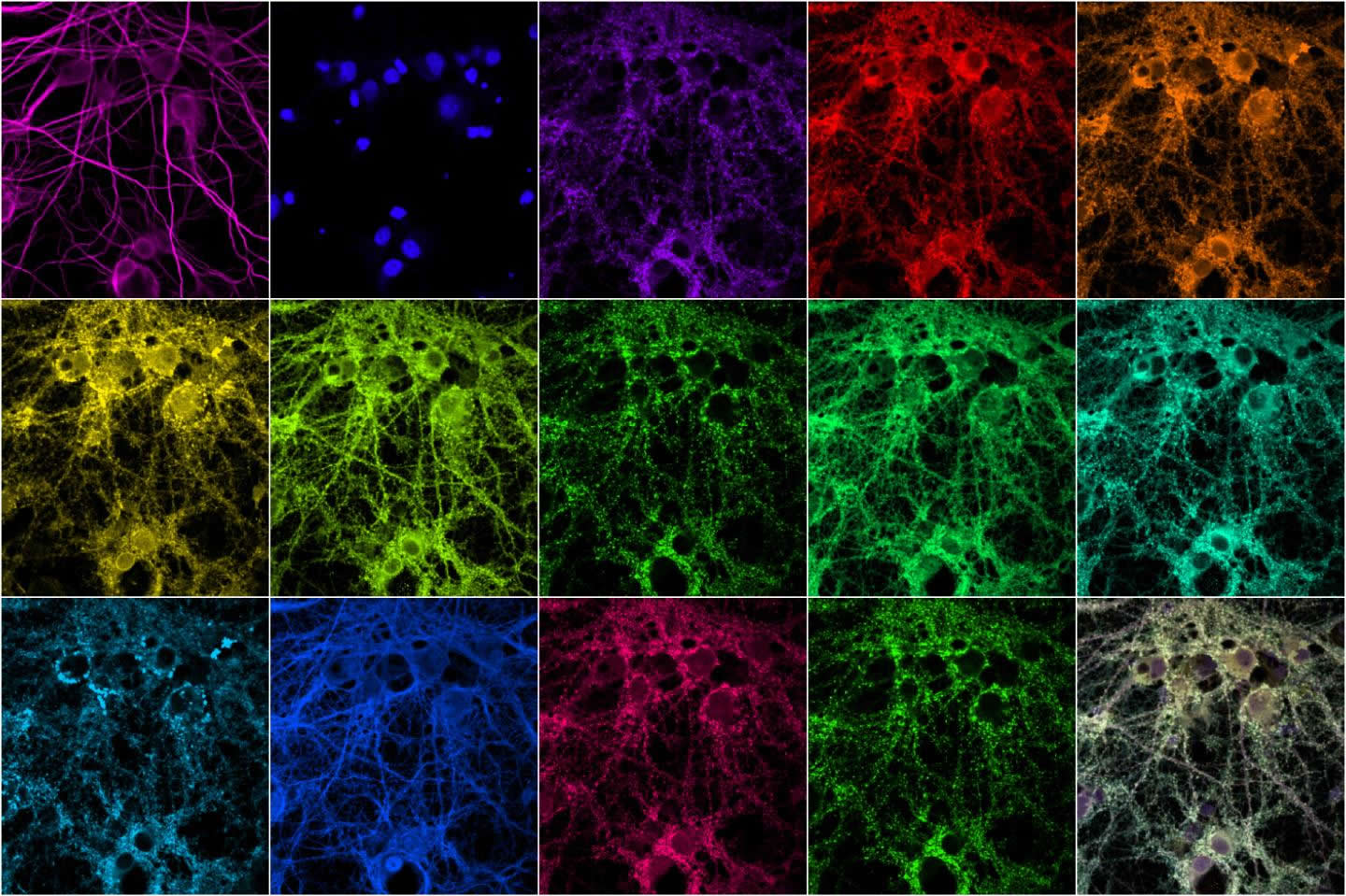 MIT engineers have developed a technique that allows them to rapidly image many different proteins within a synapse. At bottom right is a composite of the other images. The image is credited to Syuan-Ming Guo and Li Li.

Our brains contain millions of synapses — the connections that transmit messages from neuron to neuron. Within these synapses are hundreds of different proteins, and dysfunction of these proteins can lead to conditions such as schizophrenia and autism.

Researchers at MIT and the Broad Institute of Harvard and MIT have now devised a new way to rapidly image these synaptic proteins at high resolution. Using fluorescent nucleic acid probes, they can label and image an unlimited number of different proteins. They demonstrated the technique in a new study in which they imaged 12 proteins in cellular samples containing thousands of synapses.

“Multiplexed imaging is important because there’s so much variability between synapses and cells, even within the same brain,” says Mark Bathe, an MIT associate professor of biological engineering. “You really need to look simultaneously at proteins in the sample to understand what subpopulations of different synapses look like, discover new types of synapses, and understand how genetic variations impact them.”

The researchers plan to use this technique next to study what happens to synapses when they block the expression of genes associated with specific diseases, in hopes of developing new treatments that could reverse those effects.

Bathe and Jeff Cottrell, director of translational research at the Stanley Center for Psychiatric Research at the Broad Institute, are the senior authors of the study, which appears today in Nature Communications. The lead authors of the paper are former postdocs Syuan-Ming Guo and Remi Veneziano, former graduate student Simon Gordonov, and former research scientist Li Li.

Synaptic proteins have a variety of functions. Many of them help to form synaptic scaffolds, which are involved in secreting neurotransmitters and processing incoming signals. While synapses contain hundreds of these proteins, conventional fluorescence microscopy is limited to imaging at most four proteins at a time.

To boost that number, the MIT team developed a new technique based on an existing method called DNA PAINT. Using this method, originally devised by Ralf Jungmann of the Max Planck Institute of Biochemistry, researchers label proteins or other molecules of interest with a DNA-antibody probe. Then, they image each protein by delivering a fluorescent DNA “oligo” that binds to the DNA-antibody probes.

The DNA strands have an inherently low affinity for each other, so they bind and unbind periodically, creating a blinking fluorescence can be imaged using super-resolution microscopy. However, imaging each protein takes about half an hour, making it impractical for imaging many proteins in a large sample.

Bathe and his colleagues set out to create a faster method that would allow them to analyze a huge number of samples in a short period of time. To achieve that, they altered the DNA-dye imaging probe so that it would bind more tightly to the DNA-antibody, using what are called locked nucleic acids. This gives a much brighter signal, so the imaging can be done more quickly, but at slightly lower resolution.

“When we do 12 or 15 colors on a single well of neurons, the whole experiment takes an hour, compared with overnight for the super-resolution equivalent,” Bathe says.

The researchers used this technique to label 12 different proteins found in the synapse, including scaffolding proteins, proteins associated with the cytoskeleton, and proteins that are known to mark excitatory or inhibitory synapses. One of the proteins they looked at is shank3, a scaffold protein that has been linked to both autism and schizophrenia.

By analyzing protein levels in thousands of neurons, the researchers were able to determine groups of proteins that tend to associate with each other more often than others, and to learn how different synapses vary in the proteins they contain. That kind of information could be used to help classify synapses into subtypes that might help to reveal their functions.

“Inhibitory and excitatory are the canonical synapse types, but it is speculated that there are numerous different subtypes of synapses, without any real consensus around what those are,” Bathe says.

The researchers also showed that they could measure changes in synaptic protein levels that occur after neurons are treated with a compound called tetrodotoxin (TTX), which strengthens synaptic connections.

“Using conventional immunofluorescence, you can typically extract information from three or four targets within the same sample, but with our technique, we were able to expand that number to 12 different targets within the same sample. We applied this method to examine synaptic remodeling that occurs following treatment with TTX, and our finding corroborated previous work that revealed a coordinated upregulation of synaptic proteins following TTX treatment,” says Eric Danielson, an MIT senior postdoc who is an author of the study.

The researchers are now using this technique, called PRISM, to study how the structure and composition of synapses are affected by knocking out genes associated with various disorders. Sequencing the genomes of people with disorders such as autism and schizophrenia has revealed hundreds of disease-linked genetic variants, and for most of those variants, scientists have no idea how they contribute to disease.

“Understanding how genetic variation impacts neurons’ development in the brain, and their synaptic structure and function, is a huge challenge in neuroscience and in understanding how these diseases arise,” Bathe says.

Other authors of the paper include Broad Institute research scientist Karen Perez de Arce, MIT research scientist Demian Park, former MIT graduate student Anthony Kulesa, and MIT postdoc Eike-Christian Wamhoff. Paul Blainey, an associate professor of biological engineering and a member of the Broad Institute, and Edward Boyden, the Y. Eva Tan Professor in Neurotechnology and an associate professor of biological engineering and of brain and cognitive sciences, are also authors of the study.