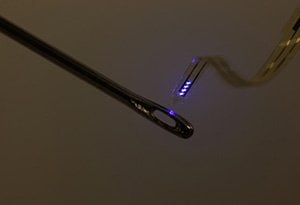 This implantable LED light can activate brain cells to release dopamine and is smaller than the eye of a needle. Credited to John A. Rogers, PhD and Michael R. Bruchas, PhD University of Washington at St. Louis
Home
Featured

Using a miniature electronic device implanted in the brain, scientists have tapped into the internal reward system of mice, prodding neurons to release dopamine, a chemical associated with pleasure.

The researchers, at Washington University School of Medicine in St. Louis and the University of Illinois at Urbana-Champaign, developed tiny devices, containing light emitting diodes (LEDs) the size of individual neurons. The devices activate brain cells with light. The scientists report their findings April 12 in the journal Science.

“This strategy should allow us to identify and map brain circuits involved in complex behaviors related to sleep, depression, addiction and anxiety,” says co-principal investigator Michael R. Bruchas, PhD, assistant professor of anesthesiology at Washington University. “Understanding which populations of neurons are involved in these complex behaviors may allow us to target specific brain cells that malfunction in depression, pain, addiction and other disorders.”

For the study, Washington University neuroscientists teamed with engineers at the University of Illinois to design microscale (LED) devices thinner than a human hair. This was the first application of the devices in optogenetics, an area of neuroscience that uses light to stimulate targeted pathways in the brain. The scientists implanted them into the brains of mice that had been genetically engineered so that some of their brain cells could be activated and controlled with light.

Although a number of important pathways in the brain can be studied with optogenetics, many neuroscientists have struggled with the engineering challenge of delivering light to precise locations deep in the brain. Most methods have tethered animals to lasers with fiber optic cables, limiting their movement and altering natural behaviors.

But with the new devices, the mice freely moved about and were able to explore a maze or scamper on a wheel. The electronic LEDs are housed in a tiny fiber implanted deep in the brain. That’s important to the device’s ability to activate the proper neurons, according to John A. Rogers, PhD, professor of materials science and engineering at the University of Illinois.

“You want to be able to deliver the light down into the depth of the brain,” Rogers says. “We think we’ve come up with some powerful strategies that involve ultra-miniaturized devices that can deliver light signals deep into the brain and into other organs in the future.”

Using light from the cellular-scale LEDs to stimulate dopamine-producing cells in the brain, the investigators taught the mice to poke their noses through a specific hole in a maze. Each time a mouse would poke its nose through the hole, that would trigger the system to wirelessly activate the LEDs in the implanted device, which then would emit light, causing neurons to release dopamine, a chemical related to the brain’s natural reward system.

“We used the LED devices to activate networks of brain cells that are influenced by the things you would find rewarding in life, like sex or chocolate,” says co-first author Jordan G. McCall, a neuroscience graduate student in Washington University’s Division of Biology and Biomedical Sciences. “When the brain cells were activated to release dopamine, the mice quickly learned to poke their noses through the hole even though they didn’t receive any food as a reward. They also developed an associated preference for the area near the hole, and they tended to hang around that part of the maze.”

The researchers believe the LED implants may be useful in other types of neuroscience studies or may even be applied to different organs. Related devices already are being used to stimulate peripheral nerves for pain management. Other devices with LEDs of multiple colors may be able to activate and control several neural circuits at once. In addition to the tiny LEDs, the devices also carry miniaturized sensors for detecting temperature and electrical activity within the brain.

Bruchas and his colleagues already have begun other studies of mice, using the LED devices to manipulate neural circuits that are involved in social behaviors. This could help scientists better understand what goes on in the brain in disorders such as depression and anxiety.

“We believe these devices will allow us to study complex stress and social interaction behaviors,” Bruchas explains. “This technology enables us to map neural circuits with respect to things like stress and pain much more effectively.”

Does Our Mind’s Eye Match Real Life? Study Shows Differences in How We Perceive Images

Notes about this optogenetics and neuroscience research