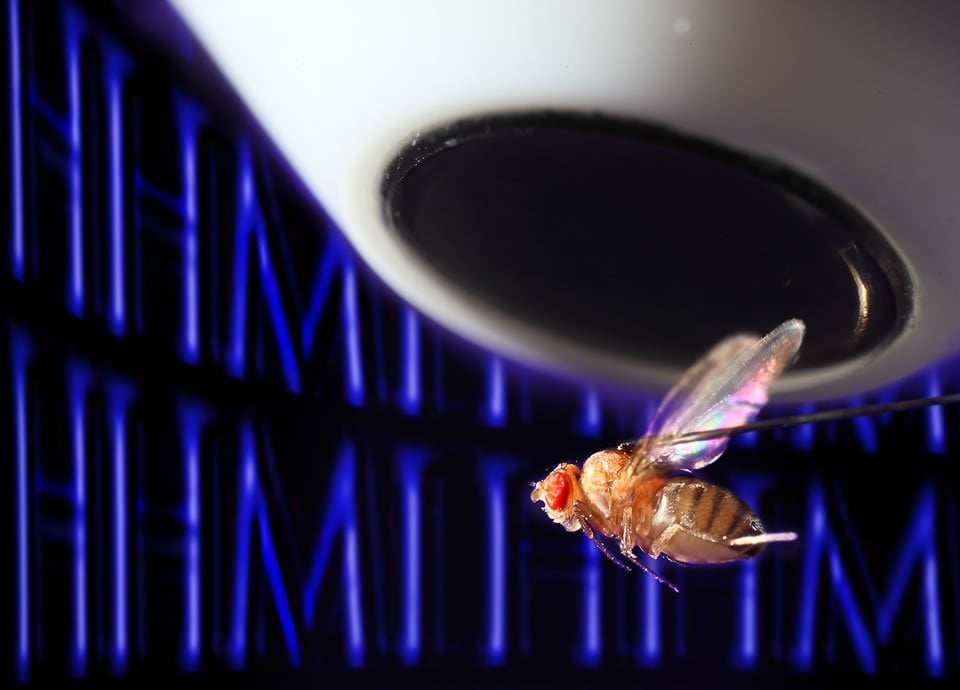 This photo represents how the letters "HHMI" might look to a fly when filtered through a class of neurons in its central brain that researchers discovered respond preferentially to vertical visual features. Credited to Igor Siwanowicz, Johannes Seelig and Vivek Jayaraman/HHMI
Home
Featured

Neurons deep in the fly’s brain tune in to some of the same basic visual features that neurons in bigger animals such as humans pick out in their surroundings. The new research is an important milestone toward understanding how the fly brain extracts relevant information about a visual scene to guide behavior.

As a tiny fruit fly navigates through its environment, it relies on visual landmarks to orient itself. Now, researchers at the Howard Hughes Medical Institute’s Janelia Farm Research Campus have identified neurons deep in the fly’s brain that tune in to some of the same basic visual features that neurons in bigger animals such as humans pick out in their surroundings. The new research is an important milestone toward understanding how the fly brain extracts relevant information about a visual scene to guide behavior.

In Vivek Jayaraman’s lab at Janelia, researchers are studying fly neural circuits with the goal of understanding fundamental principles of information processing. “Our hope is that over time we will get a clear picture of the neural transformations and algorithms involved in creating actions from sensory and motor information,” Vivek says. In a study published October 9, 2013, in the journal Nature, Vivek and postdoctoral researcher Johannes Seelig report on visual representations in a region of the fly brain thought to be important for visual learning.

Researchers have gathered compelling evidence that fruit flies recognize and remember visual features in their environment. Flies can use that information to seek out safe spaces or to avoid uncomfortable ones. Genetic studies have indicated that a region deep in the fly brain called the central complex is critical for these behaviors.

The central complex is found in the brains of insects and some crustaceans. “It’s not purely involved in visual learning, and is quite likely to be broadly important for sensory-motor integration in all these critters,” Vivek says, noting that in butterflies and locusts, the central complex may facilitate the use of polarized light for navigation during migration. Also, studies in cockroaches have found that it is important for turning in response to antennal touch. But in flies, no one had yet examined the activity of the neurons in the central complex to characterize their role. “It really was quite a mystery what was going on in this part of the fly brain,” Seelig says, adding that this study is only one step on a long road.

Technical limitations had prevented researchers from measuring neuronal activity in the fly’s central complex, where neurons are far smaller than they are in larger insects. Available techniques required flies to be immobilized, so scientists were limited to studying parts of the nervous system that detected sensory information, rather than those that processed that information or converted it into motor activity. But in 2010, Seelig and colleagues in Vivek’s lab at Janelia developed a method that enabled them to peer into the interior of a fly’s brain with a two-photon microscope, while the insect maintained the freedom to walk and move its wings. The microscope can detect genetically encoded proteins that light up when a nerve cell fires, due to the surge of calcium ions that accompanies a nerve impulse. “Once we had these tools, we really wanted to apply them to this central brain area,” Seelig says.

Using genetically modified strains of flies, Vivek and Seelig focused their experiments on specific classes of neurons and collected more comprehensive data about the activity of those populations than had been done in other species. They chose to zero in on a class of neurons known as ring neurons, on which the dendrites—the branching structures that connect to neighboring cells—were densely concentrated in specific spots within a region neighboring the central complex.

To test the ring neurons’ response to visual stimuli, Seelig placed the flies into a small virtual reality arena in which the flies could be presented with simple patterns of light. By monitoring the calcium-indicating dyes in the cells, Seelig could visualize nerve activity as each fly was exposed to different stimuli.

The researchers found that each neuron responded to visual stimuli in specific regions of the fly’s field of view. “Each cell seemed to have its receptive field in a slightly different area of that space,” Vivek explains. Further, they found that the orientation of the patterns that they projected onto the walls of the arena influenced the ring cells’ response: for example, vertical bars elicited a stronger response than horizontal bars for most cells.

Flies have an innate tendency to walk or fly toward vertically-oriented stimuli, but Vivek and Seelig were nonetheless surprised by the ring neurons’ strong bias towards detecting such patterns. Further, Seelig says, this preference for specific orientations parallels what others have found in larger animals. Neurons in the primary visual cortex of mammalian brains known as simple cells function similarly—identifying basic visual patterns and being tuned to their orientation. “A wide range of visual animals seem to use the same basic feature set when they break down the visual scene,” Vivek says, explaining that in humans, such simple features are combined by later brain regions into increasingly complex ones to eventually produce representations for faces.

He says it is not clear whether fruit flies reassemble the features in their visual field in the same way, or whether basic representations are instead converted directly into guidance for actions. “It’s an open question how complex a shape a fly needs to recognize and respond to,” he says.

The scientists also found that the ring neurons responded similarly to the visual environment regardless of whether the flies were stationary or walking. Flying diminished the response somewhat, but overall, Seelig says, visual patterns influenced the neurons’ activity far more than the insects’ behavior. “These particular neurons seem to filter out visual features, then send that information to other parts of the central complex that may transform that information into a behavioral signal. So this may be one of the major entry points for visual information to the region,” says Seelig.

Determining what happens next to the information received by ring neurons is an important question for Vivek and Seelig, who say they will expand their studies by testing the activity of other neurons in the central complex. “By marching through these networks, we hope to begin to understand how sensory information is integrated to make motor decisions,” Vivek explains.