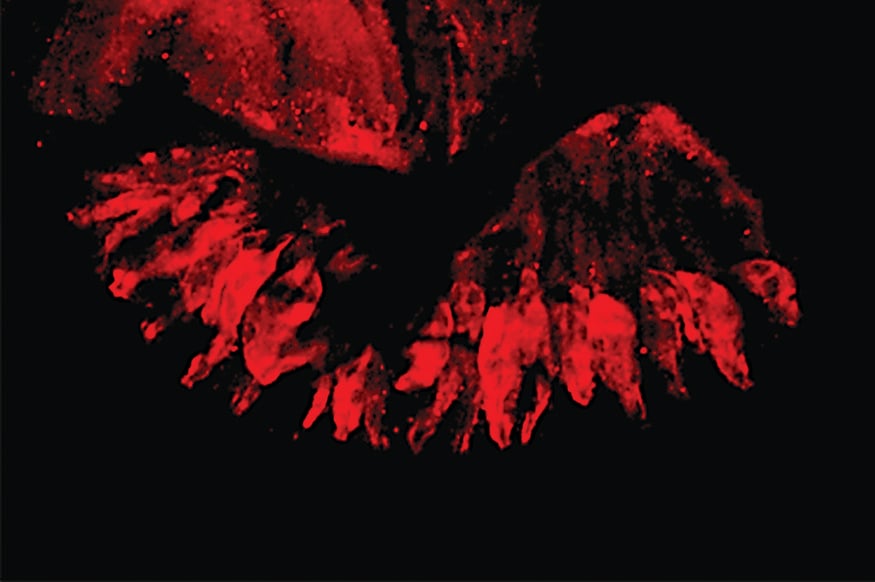 The red shows expression of the OBP49a protein in accessory (thecogen) cells in gustatory sensilla, which are distributed on the labella. Credited to UCSB.
Home
Featured

The Bitter and the Sweet: Fruit Flies Reveal a New Interaction Between the Two

Fruit flies have a lot to teach us about the complexity of food. Like these tiny little creatures, most animals are attracted to sugar but are deterred from eating it when bitter compounds are added.

A new study conducted by UC Santa Barbara’s Craig Montell, Duggan Professor of Neuroscience in the Department of Molecular, Cellular and Developmental Biology, explains a breakthrough in understanding how sensory input impacts fruit flies’ decisions about sweet taste. The findings were published today in the journal Neuron.

It is generally well known that the addition of bitter compounds inhibits attraction to sugars. However, until now the cellular and molecular mechanisms underlying an important aspect of this ubiquitous animal behavior were poorly understood.

When animals encounter bitterness in foods, two factors cause them to stop eating. First, bitter compounds bind to proteins called bitter gustatory receptors (GRs), which inhibits feeding. The second –– and more elusive –– factor involves inhibition of the sugar response. This is the focus of Montell’s research.

At the center of the team’s discovery is the function of an odorant-binding protein (OPB) in the gustatory system. These proteins are usually but not exclusively resident in the olfactory system. Montell’s team found definitive evidence that an OBP, synthesized and released from non-neuronal cells, not only binds bitter tastants, but also moves and binds to the surface of nearby gustatory receptor neurons (GRNs) that contain sugar-activated GRs.

This unanticipated process inhibits the activity of these GRNs and reduces the fruit flies’ attraction to sugars. These results not only reveal an unexpected role for an OBP in taste, but also identify the first molecular player (OBP49a) involved in the integration of opposing attractive and aversive gustatory stimuli in fruit flies.

The researchers used two different fruit flies, wild-type and mutants missing the OBP49a protein, to demonstrate that bitter compounds suppress feeding behavior by binding to the OBP49a protein. As expected, wild-type flies find bitter aversive and prefer the lower concentration of sucrose when the higher concentration of sucrose is laced with bitter tastants such as quinine.

The same was not true of the mutant flies, which do not express OBP49a. Their avoidance behavior was impaired because the bitter compounds did not inhibit the sweet response by binding to OPB49. However, loss of OBP49a did not affect gustatory behavior or action potentials in sugar- or bitter-activated GRNs when the GRNs were presented with just one type of tastant.

“We showed that the OBP49a protein was in very close proximity or even touching the sugar GRs,” said Montell. “If the bitter compound weren’t present, there would be normal sugar activation. We found that decreased behavioral avoidance to a sucrose/aversive mixture in the mutant flies was due to a deficit in the sugar-activated GRNs and not due to effects on GRNs activated by bitter compounds.”

OBP49a is the first molecule shown to promote the inhibition of the sucrose-activated GRNs by aversive chemicals in fruit flies. The findings demonstrate at least one important cellular mechanism through which bitter and sweet taste integration occurs in the taste receptor neurons. However, the findings do not exclude the possibility that suppression of sweet by bitter compounds could also take place through the integration of separate bitter and sweet inputs in the brain.

“As we get a better understanding of aversive and attractive chemosensory behaviors in flies, it helps us understand how insect pests can be controlled,” said Montell. “This is a step toward understanding the behaviors of related insects that spread disease. Molecules related to the OBPs and GRs in fruit flies are also in ticks and mosquitos that spread parasites and viruses.”