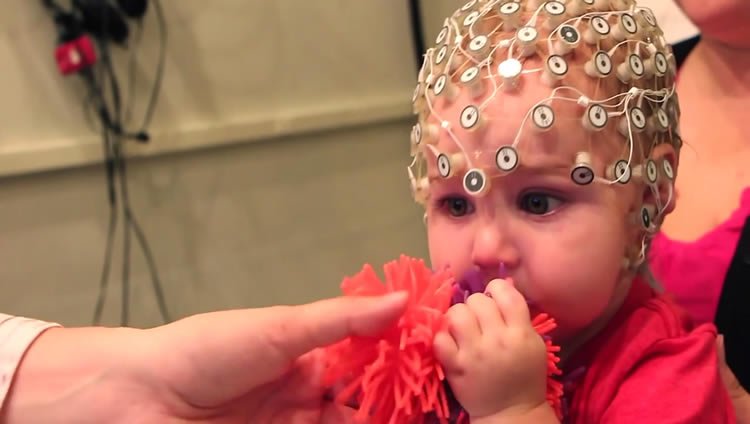 A Rutgers researcher focuses infants on noticing the sounds that are most important.

In the first months of life, when babies begin to distinguish sounds that make up language from all the other sounds in the world, they can be trained to more effectively recognize which sounds “might” be language, accelerating the development of the brain maps which are critical to language acquisition and processing, according to new Rutgers research.

The study by April Benasich and colleagues of Rutgers University-Newark is published in the October 1 issue of the Journal of Neuroscience.

The researchers found that when 4-month-old babies learned to pay attention to increasingly complex non-language audio patterns and were rewarded for correctly shifting their eyes to a video reward when the sound changed slightly, their brain scans at 7 months old showed they were faster and more accurate at detecting other sounds important to language than babies who had not been exposed to the sound patterns.

“Young babies are constantly scanning the environment to identify sounds that might be language,” says Benasich, who directs the Infancy Studies Laboratory at the University’s Center for Molecular and Behavioral Neuroscience. “This is one of their key jobs – as between 4 and 7 months of age they are setting up their pre-linguistic acoustic maps. We gently guided the babies’ brains to focus on the sensory inputs which are most meaningful to the formation of these maps.”

Acoustic maps are pools of interconnected brain cells that an infant brain constructs to allow it to decode language both quickly and automatically – and well-formed maps allow faster and more accurate processing of language, a function that is critical to optimal cognitive functioning. Benasich says babies of this particular age may be ideal for this kind of training.

“If you shape something while the baby is actually building it,” she says, “it allows each infant to build the best possible auditory network for his or her particular brain. This provides a stronger foundation for any language (or languages) the infant will be learning. Compare the baby’s reactions to language cues to an adult driving a car. You don’t think about specifics like stepping on the gas or using the turn signal. You just perform them. We want the babies’ recognition of any language-specific sounds they hear to be just that automatic.”

Benasich says she was able to accelerate and optimize the construction of babies’ acoustic maps, as compared to those of infants who either passively listened or received no training, by rewarding the babies with a brief colorful video when they responded to changes in the rapidly varying sound patterns. The sound changes could take just tens of milliseconds, and became more complex as the training progressed.

“While playing this fun game we can convey to the baby, ‘Pay attention to this. This is important. Now pay attention to this. This is important,’” says Benasich, “This process helps the baby to focus tightly on sounds in the environment that ‘may’ have critical information about the language they are learning. Previous research has shown that accurate processing of these tens-of-milliseconds differences in infancy is highly predictive of the child’s language skills at 3, 4 and 5 years.”

The experiment has the potential to provide lasting benefits. The EEG (electroencephalogram) scans showed the babies’ brains processed sound patterns with increasing efficiency at 7 months of age after six weekly training sessions. The research team will follow these infants through 18 months of age to see whether they retain and build upon these abilities with no further training. That outcome would suggest to Benasich that once the child’s earliest acoustic maps are formed in the most optimal way, the benefits will endure.

Research shows that a new game developed in the Infancy Studies Lab at Rutgers University-Newark helps babies develop the skills needed to learn language. The work could prove especially helpful for babies who come from families with a history of language impairment.

Benasich says this training has the potential to advance the development of typically developing babies as well as children at higher risk for developmental language difficulties. For parents who think this might turn their babies into geniuses, the answer is – not necessarily. Benasich compares the process of enhancing acoustic maps to some people’s wishes to be taller. “There’s a genetic range to how tall you become – perhaps you have the capacity to be 5’6” to 5’9″,” she explains. “If you get the right amounts and types of food, the right environment, the right exercise, you might get to 5’9” but you wouldn’t be 6 feet. The same principle applies here.”

Benasich says it’s very likely that one day parents at home will be able to use an interactive toy-like device – now under development – to mirror what she accomplished in the baby lab and maximize their babies’ potential. For the 8 to 15 percent of infants at highest risk for poor acoustic processing and subsequent delayed language, this baby-friendly behavioral intervention could have far-reaching implications and may offer the promise of improving or perhaps preventing language difficulties.

Notes about this learning research