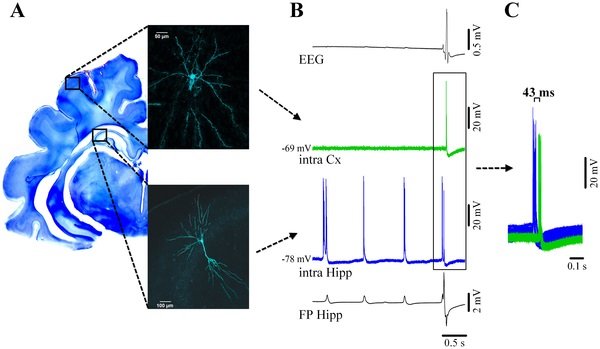 Cortical and hippocampal neuronal activity during νC state. (A) Neocortical pyramidal neuron from suprasylvian area 5 (above) and simultaneously recorded pyramidal CA3 hippocampal neuron filled with Lucifer Yellow and reconstructed with confocal microscopy. Their respective locations are schematically indicated on a Nissl-stained coronal section of the brain. (B) From top to bottom: simultaneous recording of the EEG, intracellular cortical neuron (green), intracellular hippocampal neuron (blue) and adjacent hippocampal field potential (FP). Both hippocampal traces indicate the presence of two types of activities: delta ripples at about 1 Hz (small amplitude positive potentials in the FP, accompanied by bursts of action potentials in the nearby neuron), and a νC (high amplitude spiky multiphasic potential in the FP, which is paralleled by neuronal discharge). The EEG displays a continuous isoelectric line during hippocampal ripples but displays the νC during which the cortical neuron discharges bursts of action potentials. Delta ripples are not expressed in the neocortex. (C) Time relationship between neuronal discharges for νC events indicating that the hippocampal discharges consistently precede the neocortical ones.Credited to Daniel Kroeger, Bogdan Florea, Florin Amzica in PLOS ONE.
Home
Featured

Active brain state beyond the deep coma associated with a flat EEG.

Researchers from the University of Montreal and their colleagues have found brain activity beyond a flat line EEG, which they have called Nu-complexes (from the Greek letter Νν). According to existing scientific data, researchers and doctors had established that beyond the so-called “flat line” (flat electroencephalogram or EEG), there is nothing at all, no brain activity, no possibility of life. This major discovery suggests that there is a whole new frontier in animal and human brain functioning.

The researchers observed a human patient in an extreme deep hypoxic coma under powerful anti-epileptic medication that he had been required to take due to his health issues. “Dr. Bogdan Florea from Romania contacted our research team because he had observed unexplainable phenomena on the EEG of a coma patient. We realized that there was cerebral activity, unknown until now, in the patient’s brain,” says Dr. Florin Amzica, director of the study and professor at the University of Montreal’s School of Dentistry.

Dr. Amzica’s team then decided to recreate the patient’s state in cats, the standard animal model for neurological studies. Using the anesthetic isoflurane, they placed the cats in an extremely deep—but completely reversible—coma. The cats passed the flat (isoelectric) EEG line, which is associated with silence in the cortex (the governing part of the brain). The team observed cerebral activity in 100% of the cats in deep coma, in the form of oscillations generated in the hippocampus, the part of the brain responsible for memory and learning processes. These oscillations, unknown until now, were transmitted to the master part of the brain, the cortex. The researchers concluded that the observed EEG waves, or Nu-complexes, were the same as those observed in the human patient.

Dr. Amzica stresses the importance of understanding the implications of these findings. “Those who have decided to or have to ‘unplug’ a near-brain-dead relative needn’t worry or doubt their doctor. The current criteria for diagnosing brain death are extremely stringent. Our finding may perhaps in the long term lead to a redefinition of the criteria, but we are far from that. Moreover, this is not the most important or useful aspect of our study,” Dr. Amzica said.

From Nu-complexes to therapeutic comas

The most useful aspect of this finding is the therapeutic potential, the neuroprotection, of the extreme deep coma. After a major injury, some patients are in such serious condition that doctors deliberately place them in an artificial coma to protect their body and brain so they can recover. But Dr. Amzica believes that the extreme deep coma experimented on the cats may be more protective.

“Indeed, an organ or muscle that remains inactive for a long time eventually atrophies. It is plausible that the same applies to a brain kept for an extended period in a state corresponding to a flat EEG,” says Professor Amzica. “An inactive brain coming out of a prolonged coma may be in worse shape than a brain that has had minimal activity. Research on the effects of extreme deep coma during which the hippocampus is active, through Nu-complexes. is absolutely vital for the benefit of patients.”

“Another implication of this finding is that we now have evidence that the brain is able to survive a an extremely deep coma if the integrity of the nervous structures is preserved,” said lead author of the study, Daniel Kroeger. “We also found that the hippocampus can send ‘orders’ to the brain’s commander in chief, the cortex. Finally, the possibility of studying the learning and memory processes of the hippocampus during a state of coma will help further understanding of them. In short, all sorts of avenues for basic research are now open to us.”

Notes about this coma and neurology research