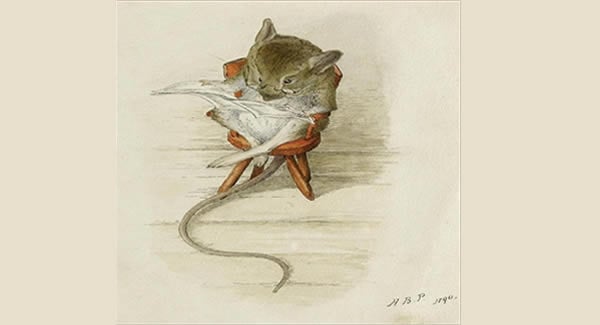 Could the three blind mice from the children’s nursery rhyme really see?

Intrinsically photosensitive Retinal Ganglion Cells, aka ipRGCs, are found to be able to detect light and help with image formation. Most people believed images could not be seen without rods and cones, but new research on mice shows this is not the case. Mice without rods and cones were able to use the ipRGCs to detect light and possibly form low acuity images. This neuroscience research could help with vision research to correct some blindness and also provides new research routes in the study of nervous system evolution.

Blind mice can ‘see’ thanks to special retinal cells
Mice are capable of seeing without rods and cones.

It would make the perfect question for the popular television show “Are You Smarter than a 5th Grader:” What parts of the eye allow us to see?

The conventional wisdom: rods and cones. The human retina contains about 120 million rods, which detect light and darkness, shape and movement, and about 7 million cones, which in addition detect color. Without them, or so we are taught, our eyesight simply would not exist.

But that might not be true, according to a study — published July 15 in the journal Neuron — that provides new hope to people who have severe vision impairments or who are blind.

A team led by biologist Samer Hattar of The Johns Hopkins University’s Krieger School of Arts and Sciences found that mice that didn’t have any rods and cones function could still see — and not just light, but also patterns and images — courtesy of special photosensitive cells in the rodents’ retinas. Until now, it was presumed that those cells, called intrinsically photosensitive Retinal Ganglion Cells, (or ipRGCs), didn’t play a role in image formation, but instead served other functions, such as dictating when the animals went to sleep or woke up. (All mammals, including humans, have ipRGCs, as well as rods and cones.)

“Up until now, it was assumed that rods and cones were the only cells capable of detecting light to allow us to form images,” said Hattar, who as an assistant professor in the Department of Biology, studies mammals’ sleep-wake cycles, also called “circadian rhythms.” “But our study shows that even mice which were blind could form low-acuity yet measurable images, using ipRGCs. The exciting thing is that, in theory at least, this means that a blind person could be trained to use his or her ipRGCs to perform simple tasks that require low visual acuity.”

“Visual acuity” refers to the sharpness or clarity of a person’s (or animal’s) vision. Someone with so-called “20/20 vision” can see clearly at a distance of 20 feet what the “average” human being can see at that distance. In contrast, a person with “20/100” vision would have to stand 20 feet away from, for instance, an eye chart that the average person could read from 100 feet away. People with very low visual acuity (worse than “20/100” with corrective lenses) are considered “legally blind.”

In addition to providing hope for people with serious vision problems, Hattar’s findings hint that, in the past, mammals may have used their ipRGCs for sight/image formation, but during the course of evolution, that function was somehow taken over by rods and cones.

The study also concludes that, far from being homogenous, ipRGCs come in five different subtypes, with the possibility that each may have different light-detecting physiological functions.

Music Helps Patients With Dementia Connect With Loved Ones

To conduct the study, the team used a special system to genetically label cells and then “trace” them to the rodents’ brains before subjecting the mice to a number of vision tests. In one, mice followed the movements of a rotating drum, a test that assessed the animals’ ability to track moving objects. In another, the rodents were placed within a “Y”-shaped maze and challenged to escape by selecting the lever that would let them out. That lever was associated with a certain visual pattern. The mice that were blind — they lacked rods, cones and ipRGCs — couldn’t find that lever. But those with only ipRGCs could.

“These studies are extremely exciting to me, because they show that even a simple light-detecting system like ipRGCs has incredible diversity and may support low-acuity vision, allowing us to peer into evolution to understand how simple vision may have originally evolved before the introduction of the fancy photoreceptors rods and cones,” Hattar said.

Hattar’s team worked on this study in collaboration with groups led by David Berson of Brown University and Glen Prusky of Weill Cornell Medical College. It was supported by grants from the National Institutes of Health, the David and Lucile Packard Foundation and the Alfred P. Sloan Foundation.