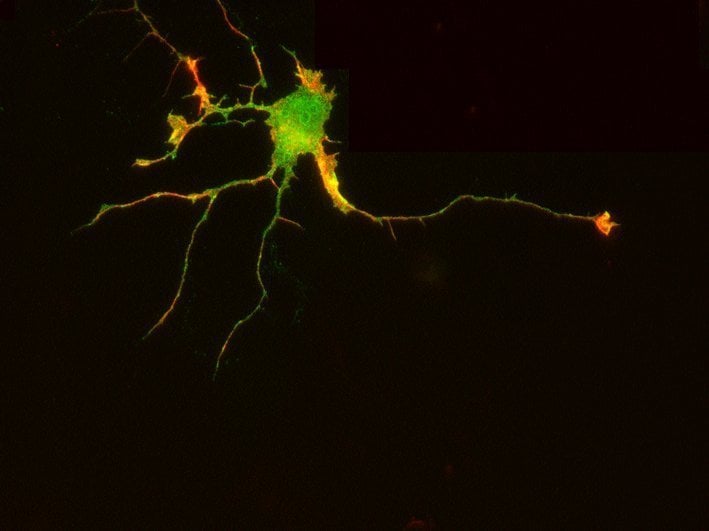 Sociable Receptors: In Pairs, Groups or in a Crowd

The proportion of different receptor groups in the cell membrane determines whether cell repulsion takes place.

When cells migrate in the body, for instance, during development, or when neurons establish new connections, cells need to know where they are going. A ‘wrong turn’ will generally cause disease or developmental disorders. The cells take direction cues from other cells with which they interact, and which they then repel after a short period of contact. Among those direction cues are ephrin ligands, recognized by Eph receptors on the cell. Together with colleagues from the Max Planck Institute of Molecular Physiology in Dortmund, scientists at the Max Planck Institute of Neurobiology in Martinsried have discovered that Eph receptors must form groups of three or four in order to become active and transmit the signal. Furthermore, the ratio of such multimers to inactive dimers determines the strength of the cellular repulsion response. The new findings help scientists understand how cells communicate and offer a point of departure for studying diseases related to breakdowns in this guidance system.

When people get together, there is usually a lot of interaction. Our cells behave similarly. When cells grow close to each other during development, they need to communicate with the surrounding cells to establish whether they are in the right place in the organism and which cells they should connect with. This communication is especially critical in the brain, where adhesion and repulsion processes between neurons occur continuously. It is only when the right cells connect that something new can be learned, for example. Emerging tumours also must exchange information with the cells around them to be able to grow. “It is of fundamental importance to understand how cells communicate with one another”, says Rüdiger Klein, Director at the Max Planck Institute of Neurobiology. He has been studying the language of the cells for years together with colleagues in his department. Their research focuses on the so-called Eph receptors and their ephrin ligands.

Cell communication via ephrin/Eph receptors comes into play in most encounters between cells. As a result of this communication, one cell usually repels the other, which continues to grow in another direction. Many such instances of interaction guide the cell to the right place. The guidance system itself – the ephrins and Eph receptors – are found on the cell surface. When the ephrin and the Eph receptor of two opposing cells meet, they form an ephrin/Eph complex. This triggers cellular processes in one or both of the cells, which eventually cause the detachment of the ephrin/Eph complex and the repulsion of the two cells from one another.

“Many receptor systems have developed a security mechanism to prevent false alarms from triggering the cellular processes”, explains Rüdiger Klein. “A signal is only transmitted to the cell if two receptor/ligand pairs form a dimer.” However, in the case of ephrins and Eph receptors, things are different. Ephrin/Eph complexes form dimers, but often also larger groups on the cell membranes. Scientists were previously not sure how this affects repulsion and repulsive signalling strength.

The neurobiologists in Martinsried and their colleagues from the Max Planck Institute of Molecular Physiology in Dortmund have now been able to artificially trigger and study the formation of groups of Eph receptors in cell culture. The results show that the otherwise usual dimers are inactive when made up of Eph receptors. Only trimers and tetramers triggered the signals that caused cell repulsion. However, the scientists’ working hypothesis that a larger group would trigger a stronger signal turned out to be too simple. “It took us quite some time to figure out the system”, says Andreas Schaupp, first author of the study. “In fact, it is not the size of each individual group that matters, but the composition of the entire population of groups.”

The more trimers and tetramers and the fewer dimers present in the cell membrane, the stronger the repulsion signal. In contrast, a higher abundance of dimers and a smaller number of multimers produce a weaker reaction or none at all. “Thanks to this mechanism, a cell can grade its response from forcing another cell to make a U-turn to simply guiding it past at close range”, Rüdiger Klein says. This is an important step in understanding how migrating and growing cells navigate, and why this guidance system breaks down in some diseases.