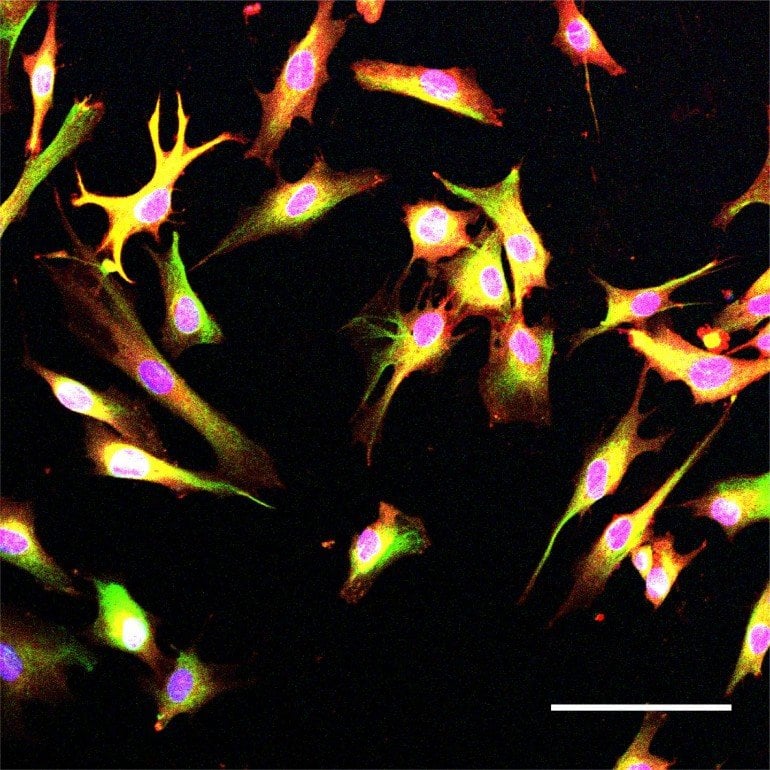 Summary: The Alzheimer’s risk gene ApoE4 hampers the process of endocytosis in astrocytes.

In a new study, a team of scientists based at The Picower Institute for Learning and Memory at MIT and the Whitehead Institute for Biomedical Research reveals evidence showing that the most prominent Alzheimer’s disease risk gene may disrupt a fundamental process in a key type of brain cell. Moreover, in a sign of how important it is to delve into the complex ways that genes intersect in disease, they found that increasing the expression of another Alzheimer’s-associated gene in those cells could help alleviate the problem.

About 25 percent of people have the APOE4 variant of the APOE gene, which puts them at substantially greater risk for Alzheimer’s disease than those with the more common APOE3 version. Scientists have been working for decades to understand why this is so.

The new study in Cell Reports finds that in astrocytes, which are the most common non-neuron cell in the brain, the variant hampers the process of endocytosis, which is a major way that cells bring materials in from outside.

That functional deficit could undermine several of the vital roles that astrocytes play in the brain, the researchers noted, including how they facilitate communication among neurons or maintain the blood-brain barrier, which stringently filters what circulates into or out of the brain.

“We have identified that APOE4 imposes an endocytosis deficiency in astrocytes,” said Priyanka Narayan, a researcher at the National Institutes of Health who co-led the work while a postdoc in the labs of the late Susan Lindquist, member of the Whitehead Institute, and of Li-Huei Tsai, Picower Professor of Neuroscience and the study’s corresponding author. “This effect could have a number of downstream consequences such as impaired communication with other cell types, poor clearance of extracellular material, or poor maintenance of metabolic homeostasis.”

The research began in the lab of Lindquist, who was also a Professor of Biology at MIT. Lindquist and Tsai, were close collaborators. After Lindquist died, the research team completed the work in the Tsai lab at MIT. The study’s co-lead author is Grzegorz Sienski of the Whitehead Institute.

As part of their work, the team also found that in APOE4-carrying astrocytes increasing expression of an Alzheimer’s associated gene called PICALM reversed the endocytosis defects.

“Both APOE and PICALM are Alzheimer’s risk genes,” said Tsai, a founding director of MIT’s Aging Brain Initiative. “It is really interesting that the two genes converge on endocytosis. This indicates that faulty endocytosis plays a key role in the etiology of Alzheimer’s.”

For at least a decade, studies have suggested connections among Alzheimer’s, APOE4 and errant endocytosis, but have not pinpointed specific mechanisms. The team sought them out–and also looked for ways to remediate the deficits–through a series of lab experiments in cultures of stem cell-derived human astrocytes and genetically engineered yeast. Tsai’s team focused on astrocytes because they produce the most ApoE protein in the brain.

By comparing astrocytes that were identical except in whether they had the APOE4 or APOE3 variants, the researchers found several signs of disrupted endocytosis, specifically in the early stage of the process when key proteins were notably reduced in the APOE4 carrying cells. They were able to directly observe that the afflicted astrocytes were less capable of bringing in materials from the outside. When they knocked out the APOE gene they no longer saw a defect in early endocytosis, affirming that the problem related to having the APOE4 variant.

By engineering human APOE3 and APOE4 into yeast cells, Tsai’s team was able to replicate clear signs of APOE4’s early endocytic disruption. This is possible because the function is so fundamental to how cells work, it is similar, or “conserved,” in yeast and people. Once they knew they could use yeast as a model, they could then set out to look for endocytosis proteins that, if manipulated, could rescue the observed defect.

They found one: a yeast protein called Yap1802p. When they made the yeast cells express extra Yap1802p, early endocytosis proteins were produced at normal levels, endocytosis function operated better and APOE4 cells, which had failed to grow as healthfully as APOE3 cells did, exhibited better growth.

Importantly, the gene that encodes Yap1802p has a human counterpart: PICALM. Studies have shown PICALM to have a complex but significant role in affecting Alzheimer’s disease risk.

Although, it is difficult to find drugs that specifically increase endocytosis, this study could help scientists and clinicians better understand patients’ risk, Narayan said.

“In our study, we see that in the context of an APOE4 genotype, increasing PICALM can alleviate deficiencies in early endocytosis,” she said. “Given that APOE4 carriers represent a significant proportion of AD patients, this functional interaction between APOE4 and PICALM could be relevant to assessing their level of disease risk. It also gives an example of how the genetic background of an individual can interact and potentially modulate the detrimental effects of the APOE4 genotype.”

Moreover, the team’s method of going back and forth between human cell cultures and yeast, provides a way of identifying how AD risk genes impact cellular biology, and how other genes can modulate these effects.

The ε4 allele of apolipoprotein E (APOE4) is a genetic risk factor for many diseases, including late-onset Alzheimer’s disease (AD). We investigate the cellular consequences of APOE4 in human iPSC-derived astrocytes, observing an endocytic defect in APOE4 astrocytes compared with their isogenic APOE3counterparts. Given the evolutionarily conserved nature of endocytosis, we built a yeast model to identify genetic modifiers of the endocytic defect associated with APOE4. In yeast, only the expression of APOE4 results in dose-dependent defects in both endocytosis and growth. We discover that increasing expression of the early endocytic adaptor protein Yap1802p, a homolog of the human AD risk factor PICALM, rescues the APOE4-induced endocytic defect. In iPSC-derived human astrocytes, increasing expression of PICALM similarly reverses endocytic disruptions. Our work identifies a functional interaction between two AD genetic risk factors—APOE4 and PICALM—centered on the conserved biological process of endocytosis.