The fear of experiencing police brutality by minorities also exacts an emotional toll that is pervasive, yet largely hidden from view. 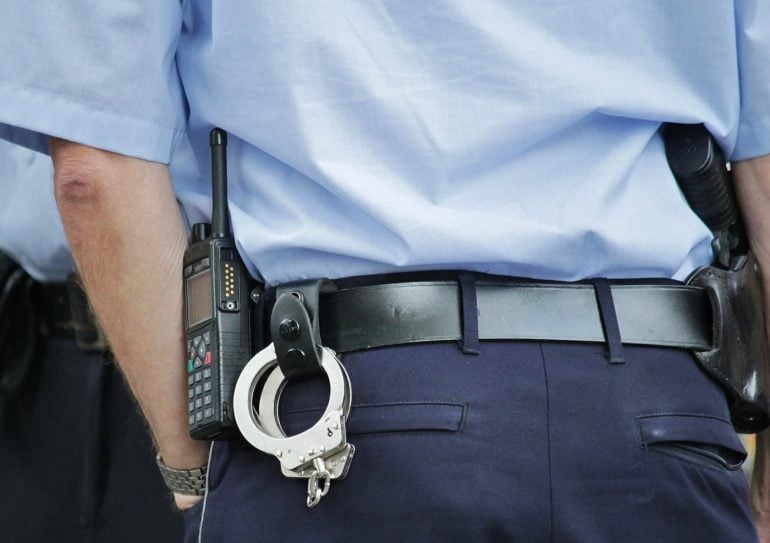 Previous studies have examined fear of police generally, but this is the first study to specifically examine the fear of police brutality. Image is in the public domain.

Summary: A new study reveals blacks are five times more likely, and Latinos four times more likely, to fear police brutality than whites. The fear of experiencing police brutality by minorities also exacts an emotional toll that is pervasive, yet largely hidden from view. The emotional burden leads to an increase in psychological and physical health consequences, as well as behavioral changes.

Criminology instructor Murat Haner and Melissa Sloan, associate professor of sociology, report In “Race and Worrying about Police Brutality: The Hidden Injuries of Minority Status in America” that while only 6.6 percent of whites “worry a lot” about police violence, some minorities experience much greater fear, with 32.4 percent of blacks and 26.5 percent of Latinos reporting they “worry a lot” about becoming victims of police violence.

Haner and Sloan, researchers at USF’s Sarasota-Manatee campus, conducted the study with four other professors over three months in 2018. Their article was published online on May 26 in the journal, Victims & Offenders: An International Journal of Evidence-based Research, Policy and Practice.

“Blacks and Hispanics live with these worries that whites really have no concept of,” Sloan said, summing up. “Given the long history of racial discrimination in the United States, this divide likely has been occurring for a long time, across generations.”

The study is based on a national survey of 1,000 respondents to measure fear by how much the study’s participants “worry” about experiencing police violence.

Participants were asked how much they worry about six potential areas of concern:

The goal of asking about these other worries was to determine if racial/ethnic differences were unique to the worry of police brutality or found within other examples of victimization, and if so, to what extent.

Previous studies have examined fear of police generally, but this is the first study to specifically examine the fear of police brutality. Further, the study includes a representative proportion of Latino respondents – a subgroup of the U.S. population often omitted from the area of research.

In addition to considering racial differences as related to police violence, the study suggests that for blacks, as well as Hispanics to an extent, worrying about police brutality exacts an emotional toll that is pervasive and largely hidden from view. This emotional burden is hazardous because research shows excessive worry leads to psychological and physical health consequences as well as behavioral changes.

“Research on the fear of crime shows that worries like these can lead to avoidance behaviors where people restrict normal activities and social interaction out of fear, which can lead to feelings of isolation and lower quality of life,” Sloan said. “More concerning is that this worry is justified as demonstrated by the killing of George Floyd as well as the numerous other black Americans who have been brutalized and killed by police in the past.”

The extent of this worry among blacks suggests that these consequences may affect entire communities, not only individuals in contact with police and the criminal justice system.

“Taken as a whole, what remains is an insidious picture in which communities worry about those they are supposed to trust during their greatest time of need,” Haner said. “There is a substantial subpopulation in America that worries about being victimized, not by some perpetrator, but by the state – the very people who are sworn to protect and serve them.”

To provide further context, the researchers analyzed responses about worries across the five other victimization scenarios, which are listed above.

Perception Depends on Whether You Are Looking Up or Down

Worries about becoming the victim of a violent crime or a mass shooting appeared homogeneous, with black and Latino respondents worrying no more or less than white respondents. However, it appeared that younger Americans worry more than older Americans about both of these events.

Race and Worrying About Police Brutality: The Hidden Injuries of Minority Status in America

Given the historically contentious relationship – including most notably the use of excessive and lethal force – between the police and African Americans, the current project examines the extent to which Blacks in the United States fear police brutality. The study is based on a national-level survey (N = 1,000), and measures fear by how much respondents “worry” about experiencing police force. The data support the racial divide hypothesis, showing that Blacks’ worry about such violence is over five times that of Whites. Guided by the racial/ethnic gradient hypothesis, the analyses also assess Hispanic respondents’ level of worry. Rather than forming a gradient by falling midway between Blacks and Whites, Hispanics’ worry about police brutality more closely reflects those of Blacks at more than four times that of Whites, suggesting a racial/ethnic divide. These findings thus assert that worrying about police brutality is an emotional injury that minorities disproportionately experience and whose pervasiveness remains largely hidden from view.