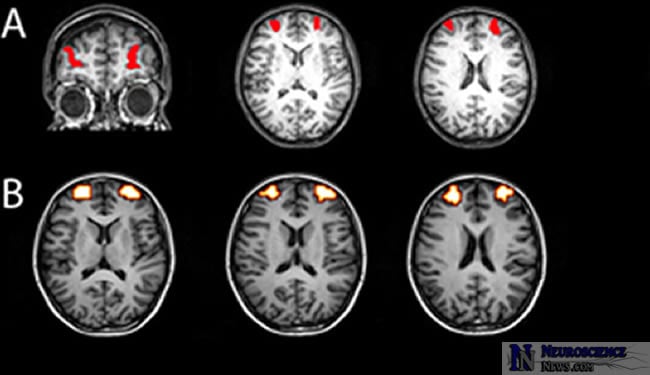 People Control Thoughts Better When They See Their Brain Activity

As humans face increasing distractions in their personal and professional lives, University of British Columbia researchers have discovered that people can gain greater control over their thoughts with real-time brain feedback.

The study is the world’s first investigation of how real-time functional Magnetic Resonance Imaging (fMRI) feedback from the brain region responsible for higher-order thoughts, including introspection, affects our ability to control these thoughts. The researchers find that real-time brain feedback significantly improves people’s ability to control their thoughts and effectively ‘train their brains.’

“Just like athletes in training benefit from a coach’s guidance, feedback from our brain can help us to be more aware of our thoughts,” says co-author Prof. Kalina Christoff, UBC Dept. of Psychology. “Our findings suggest that the ability to control our thinking improves when we know how the corresponding area in our brain is behaving.”

For the study, published the current issue of NeuroImage journal, participants performed tasks that either raised or lowered mental introspection in 30-second intervals over four six-minute sessions. fMRI technology tracked real-time activity in the rostrolateral prefrontal cortex (RLPFC), the region of the brain involved with higher-order thoughts.

Participants with access to real-time fMRI feedback could see their RLPFC activity increase during introspection and decrease during non-introspective thoughts, such as mental tasks that focused on body sensations. These participants used the feedback to guide their thoughts, which significantly improved their ability to control their thoughts and successfully perform the mental tasks. In contrast, participants given inaccurate or no brain feedback did not achieve any improvement in brain regulation.

“When participants saw their brain reacting to their thoughts, they knew whether they were performing the task well or poorly, and they could adjust their thoughts accordingly,” says co-author Graeme McCaig, a graduate of UBC’s Dept. of Electrical and Computer Engineering’s Human Computer Interaction specialization. “As a result, participants who received the real-time feedback were able to focus on the mental task more consistently.”

The study points to the possibility of improving our everyday lives through fMRI-assisted advances in our ability to focus our minds on personal or professional matters, according to the research team, which includes Matt Dixon, Kamyar Keramatian and Irene Liu.

Risk of Dementia Has Been Rising for Years – Instead of Falling

The findings also raise hope for clinical treatments of conditions that can benefit from improved awareness and regulation of one’s thoughts, including depression, anxiety, and obsessive-compulsive disorders, the researchers says. For example, with increased availability of fMRI technology, real-time brain feedback represents a potentially important complement to feedback provided by a therapist or a patient’s own self-monitoring ability.