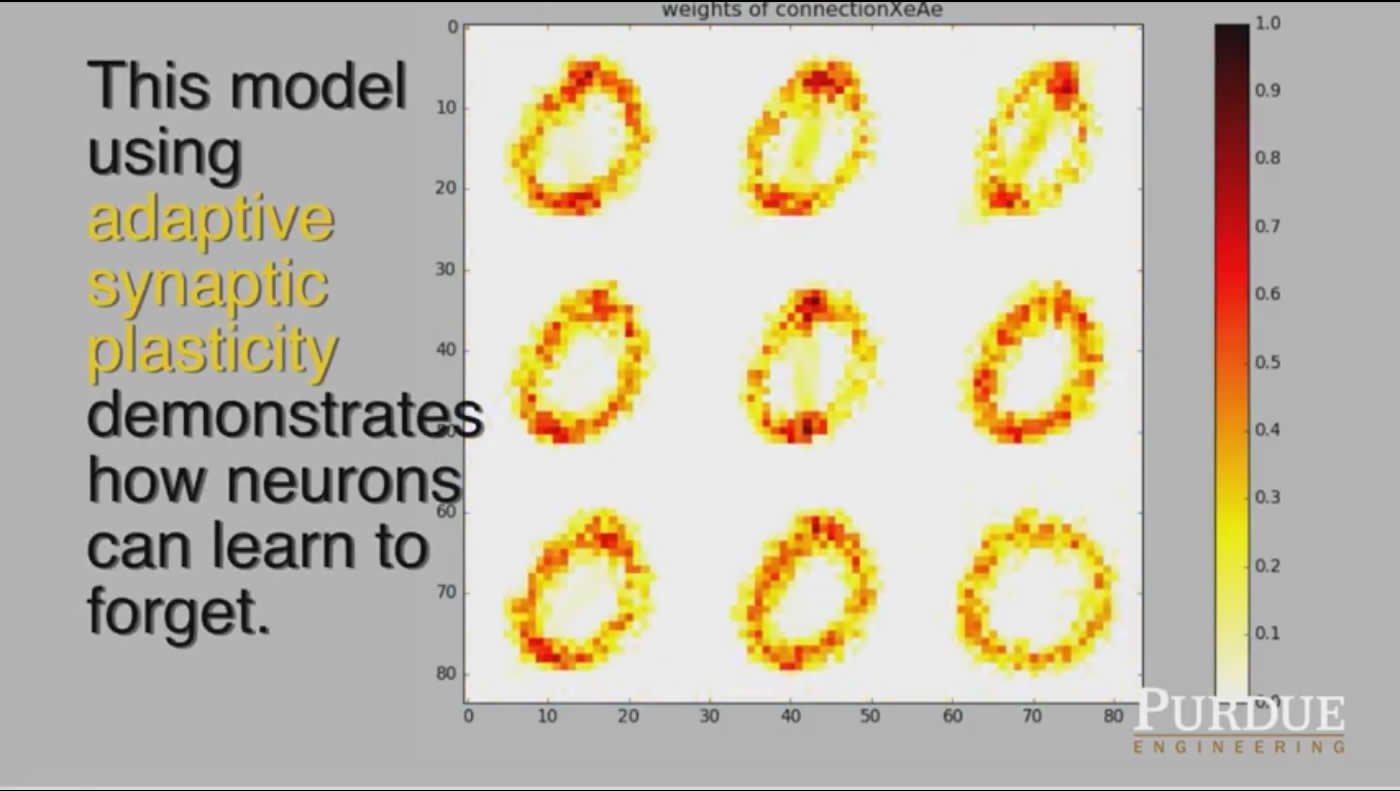 The researchers have developed a “neural learning model” they have termed adaptive synaptic plasticity. NeuroscienceNews.com image is adapted from the Purdue Engineering video.

Summary: Purdue researchers create an organismoid that can mimic some aspects of human thought, specifically the ability to retain important information and forget unimportant memories.

A new computing technology called “organismoids” mimics some aspects of human thought by learning how to forget unimportant memories while retaining more vital ones.

“The human brain is capable of continuous lifelong learning,” said Kaushik Roy, Purdue University’s Edward G. Tiedemann Jr. Distinguished Professor of Electrical and Computer Engineering. “And it does this partially by forgetting some information that is not critical. I learn slowly, but I keep forgetting other things along the way, so there is a graceful degradation in my accuracy of detecting things that are old. What we are trying to do is mimic that behavior of the brain to a certain extent, to create computers that not only learn new information but that also learn what to forget.”

Central to the research is a ceramic “quantum material” called samarium nickelate, which was used to create devices called organismoids, said Shriram Ramanathan, a Purdue professor of materials engineering.

“These devices possess certain characteristics of living beings and enable us to advance new learning algorithms that mimic some aspects of the human brain,” Roy said. “The results have far reaching implications for the fields of quantum materials as well as brain-inspired computing.”

Findings are detailed in a paper appearing Monday (Aug. 14) in the journal Nature Communications.

When exposed to hydrogen gas, the material undergoes a massive resistance change, as its crystal lattice is “doped” by hydrogen atoms. The material is said to breathe, expanding when hydrogen is added and contracting when the hydrogen is removed.

“The main thing about the material is that when this breathes in hydrogen there is a spectacular quantum mechanical effect that allows the resistance to change by orders of magnitude,” Ramanathan said. “This is very unusual, and the effect is reversible because this dopant can be weakly attached to the lattice, so if you remove the hydrogen from the environment you can change the electrical resistance.”

When hydrogen is exposed to the material, it splits into a proton and an electron, and the electron attaches to the nickel, temporarily causing the material to become an insulator.

“Then, when the hydrogen comes out, this material becomes conducting again,” Ramanathan said. “What we show in this paper is the extent of conduction and insulation can be very carefully tuned.”

This changing conductance and the “decay of that conductance over time” is similar to a key animal behavior called habituation.

“Many animals, even organisms that don’t have a brain, possess this fundamental survival skill,” Roy said. “And that’s why we call this organismic behavior. If I see certain information on a regular basis, I get habituated, retaining memory of it. But if I haven’t seen such information over a long time, then it slowly starts decaying. So, the behavior of conductance going up and down in exponential fashion can be used to create a new computing model that will incrementally learn and at same time forget things in a proper way.”

The researchers have developed a “neural learning model” they have termed adaptive synaptic plasticity.

“This could be really important because it’s one of the first examples of using quantum materials directly for solving a major problem in neural learning,” Ramanathan said.

The researchers used the organismoids to implement the new model for synaptic plasticity.

“Using this effect we are able to model something that is a real problem in neuromorphic computing,” Roy said. “For example, if I have learned your facial features I can still go out and learn someone else’s features without really forgetting yours. However, this is difficult for computing models to do. When learning your features, they can forget the features of the original person, a problem called catastrophic forgetting.”

The researchers have developed a “neural learning model” they have termed adaptive synaptic plasticity. NeuroscienceNews.com image is adapted from the Purdue Engineering video.

Neuromorphic computing is not intended to replace conventional general-purpose computer hardware, based on complementary metal-oxide-semiconductor transistors, or CMOS. Instead, it is expected to work in conjunction with CMOS-based computing.

Whereas CMOS technology is especially adept at performing complex mathematical computations, neuromorphic computing might be able to perform roles such as facial recognition, reasoning and human-like decision making.

Roy’s team performed the research work on the plasticity model, and other collaborators concentrated on the physics of how to explain the process of doping-driven change in conductance central to the paper. The multidisciplinary team includes experts in materials, electrical engineering, physics, and algorithms.

“It’s not often that a materials science person can talk to a circuits person like professor Roy and come up with something meaningful,” Ramanathan said.

Making Sense of Socially Enhanced Aggression in the Brain

It could bring circuits that resemble biological neurons and synapses in a compact design not possible with CMOS circuits. Whereas it would take many CMOS devices to mimic a neuron or synapse, it might take only a single spintronic device.

In future work, the researchers may demonstrate how to achieve habituation in an integrated circuit instead of exposing the material to hydrogen gas.

The research paper’s co-authors include Purdue postdoctoral research associate Fan Zuo and graduate student Priyadarshini Panda. A complete list of co-authors is available in the abstract.

Funding: The research is affiliated with the Center for Spintronic Materials, Interfaces and Novel Architecture (C-SPIN), one of six centers funded by the Semiconductor Research Corp. and the Defense Advanced Research Projects Agency. Funding for the research was provided by the U.S. Army Research Office, U.S. Air Force Office of Scientific Research, C-SPIN, the National Science Foundation, Intel Corp., and by the Vannevar Bush Faculty Fellowship.

Habituation based synaptic plasticity and organismic learning in a quantum perovskite

A central characteristic of living beings is the ability to learn from and respond to their environment leading to habit formation and decision making. This behavior, known as habituation, is universal among all forms of life with a central nervous system, and is also observed in single-cell organisms that do not possess a brain. Here, we report the discovery of habituation-based plasticity utilizing a perovskite quantum system by dynamical modulation of electron localization. Microscopic mechanisms and pathways that enable this organismic collective charge-lattice interaction are elucidated by first-principles theory, synchrotron investigations, ab initio molecular dynamics simulations, and in situ environmental breathing studies. We implement a learning algorithm inspired by the conductance relaxation behavior of perovskites that naturally incorporates habituation, and demonstrate learning to forget: a key feature of animal and human brains. Incorporating this elementary skill in learning boosts the capability of neural computing in a sequential, dynamic environment.