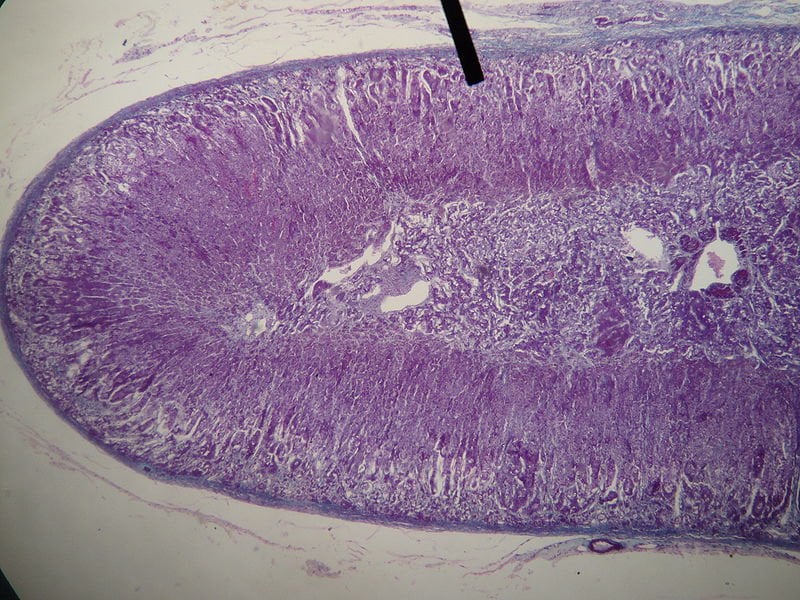 Researchers discovered the switch from conscious to unconscious learning systems is triggered by the intact function of mineralocorticoid receptors. Mineralocorticoid receptors are activated by hormones in response to stress in the adrenal cortex. This image is a hematoxylin-eosin staining of a non-pathological adrenal gland. The pointer shows the adrenal cortex.
Home
Featured

How to Learn Successfully Even Under Stress

Whenever we have to acquire new knowledge under stress, the brain deploys unconscious rather than conscious learning processes. Neuroscientists at the Ruhr-Universität Bochum have discovered that this switch from conscious to unconscious learning systems is triggered by the intact function of mineralocorticoid receptors. These receptors are activated by hormones released in response to stress by the adrenal cortex. The team of PD Dr Lars Schwabe from the Institute of Cognitive Neuroscience, together with colleagues from the neurology department at the university clinic Bergmannsheil, reports in the journal Biological Psychiatry.

Predicting the weather under stress

The team from Bochum has examined 80 subjects, 50 per cent of whom were given a drug blocking mineralocorticoid receptors in the brain. The remaining participants took a placebo drug. Twenty participants from each group were subjected to a stress-inducing experience. Subsequently, all participants underwent a learning test, the so-called weather prediction task. The subjects were shown playing cards with different symbols and had to learn which combinations of cards meant rain and which meant sunshine. The researchers used MRI to record the respective brain activity.

There are two different approaches to master the weather prediction test: some subjects tried consciously to formulate a rule that would enable them to predict sunshine and rain. Others learned unconsciously to give the right answer, following their gut feeling, as it were. The team of Lars Schwabe demonstrated in August 2012 that, under stress, the brain prefers unconscious to conscious learning. “This switch to another memory system happens automatically,” says Lars Schwabe. “It makes sense for the organism to react in this manner. Thus, learning efficiency can be maintained even under stress.” However, this works only with fully functional mineralocorticoid receptors. Once the researchers blocked these receptors by applying the drug Spironolactone, the participants switched over to the unconscious strategy less frequently, thus demonstrating a poorer learning efficiency.

These effects also became evident in MRI data. Usually, stress causes the brain activity to shift from the hippocampus – a structure for conscious learning – to the dorsal striatum, which manages unconscious learning. However, this stress-induced switch took place only in the placebo group, not in subjects who had been given the mineralocorticoid receptor blocker. Consequently, the mineralocorticoid receptors play a crucial role in enabling the brain to adapt to stressful situations.

Notes about this learning and stress research