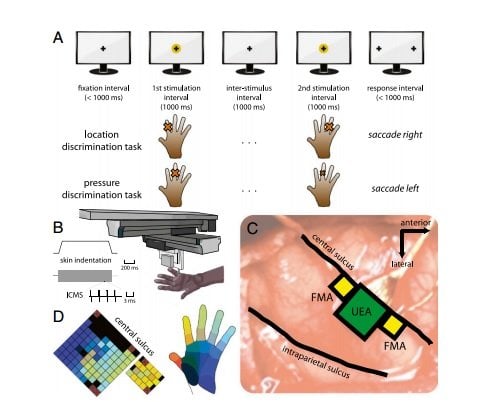 Experimental design. (A, Upper) Trial structure for all of the behavioral tasks: The cross is a ﬁxation target or a response target, and the yellow circles indicate the two stimulus intervals. (A, Lower) One example trial each for the location discrimination and the pressure discrimination task. The size of the cross is proportional to the depth of indentation. (B) Depiction of the triaxial indenting stimulator. (Upper Inset) Trajectory of the tactile stimuli, which consisted of 1-s-long trapezoidal indentations into the skin. (Lower Inset) Structure of ICMS, which consisted of 300-Hz trains of symmetric biphasic pulses (phase duration = 200 μs, interphase duration = 53 μs) (38) lasting 1 s unless otherwise speciﬁed. (C) Chronic electrode implants in one of the three animals, showing the UEA, impinging on area 1,ﬂanked by two FMAs, impinging on area 3b. We used FMAs to target area 3b, because the digit representation of area 3b is located deep in the posterior bank of the central sulcus and cannot be accessed with the 1.5-mm-long UEA electrodes. The UEA and the lateral-anterior FMA impinged on the hand representation; the medial-posterior FMA impinged on the arm representation in all three animals and so it was not used in the experiments. (D) RF map of the UEA and the lateral-anterior FMA. The UEA in this animal had RFs on the palm and digits 3–5; the FMA had RFs primarily on digit 2 (index). A red X denotes a reference electrode. Credited to PNAS/University of Chicago Medicine.
Home
Featured

A Blueprint for Restoring Touch With a Prosthetic Hand

New research at the University of Chicago is laying the groundwork for touch-sensitive prosthetic limbs that one day could convey real-time sensory information to amputees via a direct interface with the brain.

The research, published early online in the Proceedings of the National Academy of Sciences, marks an important step toward new technology that, if implemented successfully, would increase the dexterity and clinical viability of robotic prosthetic limbs.

“To restore sensory motor function of an arm, you not only have to replace the motor signals that the brain sends to the arm to move it around, but you also have to replace the sensory signals that the arm sends back to the brain,” said the study’s senior author, Sliman Bensmaia, PhD, assistant professor in the Department of Organismal Biology and Anatomy at the University of Chicago. “We think the key is to invoke what we know about how the brain of the intact organism processes sensory information, and then try to reproduce these patterns of neural activity through stimulation of the brain.”

Bensmaia’s research is part of Revolutionizing Prosthetics, a multi-year Defense Advanced Research Projects Agency (DARPA) project that seeks to create a modular, artificial upper limb that will restore natural motor control and sensation in amputees. Managed by the Johns Hopkins University Applied Physics Laboratory, the project has brought together an interdisciplinary team of experts from academic institutions, government agencies and private companies.

Bensmaia and his colleagues at the University of Chicago are working specifically on the sensory aspects of these limbs. In a series of experiments with monkeys, whose sensory systems closely resemble those of humans, they identified patterns of neural activity that occur during natural object manipulation and then successfully induced these patterns through artificial means.

The first set of experiments focused on contact location, or sensing where the skin has been touched. The animals were trained to identify several patterns of physical contact with their fingers. Researchers then connected electrodes to areas of the brain corresponding to each finger and replaced physical touches with electrical stimuli delivered to the appropriate areas of the brain. The result: The animals responded the same way to artificial stimulation as they did to physical contact.

Next the researchers focused on the sensation of pressure. In this case, they developed an algorithm to generate the appropriate amount of electrical current to elicit a sensation of pressure. Again, the animals’ response was the same whether the stimuli were felt through their fingers or through artificial means.

Finally, Bensmaia and his colleagues studied the sensation of contact events. When the hand first touches or releases an object, it produces a burst of activity in the brain. Again, the researchers established that these bursts of brain activity can be mimicked through electrical stimulation.

The result of these experiments is a set of instructions that can be incorporated into a robotic prosthetic arm to provide sensory feedback to the brain through a neural interface. Bensmaia believes such feedback will bring these devices closer to being tested in human clinical trials.

“The algorithms to decipher motor signals have come quite a long way, where you can now control arms with seven degrees of freedom. It’s very sophisticated. But I think there’s a strong argument to be made that they will not be clinically viable until the sensory feedback is incorporated,” Bensmaia said. “When it is, the functionality of these limbs will increase substantially.”

Notes about this neuroprosthetics and neuroscience research