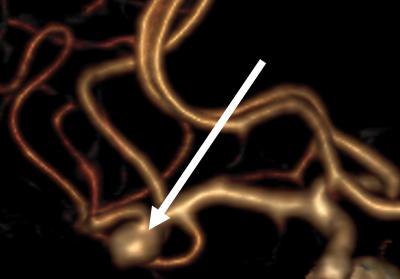 A long term, population based study shows the risk of SAH depends on the combination of certain risk factors. Risk factors inculde smoking, hypertension and the sex of a person. The findings could provide doctors with key information on who could be most susceptible to SAH and intracranial aneurysms rupturing. The image shows a middle cerebral artery bifurcation aneurysm. Credited to Miikka Korja, University of Helsinki.
Home
Featured

Subarachnoid haemorrhage (SAH) is one of the most devastating cerebrovascular catastrophes causing death in 40 to 50% of the cases. The most common cause of SAH is a rupture of an intracranial aneurysm. If the aneurysm is found, it can be treated before the possible rupture. However, some intracranial aneurysms will never rupture – the problem is that the doctors don’t know which aneurysms will and which will not. So, they don’t know which patients should be treated and who can safely be left untreated.

A long-term, population-based Finnish study on SAH, which is based on the FINRISK health examination surveys, and published in PLOS ONE on 9th September, shows that the risk of SAH depends strongly on the combination of certain risk factors. The SAH incidence was shown to vary from 8 up to 171 per 100 000 person-years, depending on whether people had multiple risk factors for SAH – such as smoking, hypertension and female sex – or not.

Such an extreme risk factor -dependent variation in the incidence of any cardiovascular disease is exceptional, and may have significant clinical implications, says one of the main authors, Associate Professor Miikka Korja from the Helsinki University Central Hospital and Australian School of Advanced Medicine.

In this largest SAH risk factor study ever, the study group also identified three new risk factors for SAH: previous myocardial infarction, history of stroke in mother, and elevated cholesterol levels in men. The results revise the understanding of the epidemiology of SAH and indicate that the risk factors for SAH appear to be similar to those for other cardiovascular diseases.

We have previously shown that lifestyle risk factors affect significantly the life expectancy of SAH survivors, and now we have shown that the same risk factors also affect dramatically the risk of SAH itself. Thus, it appears quite clear that especially smoking cessation and hypertension treatment are important in preventing SAH and increasing life expectancy after SAH, clarifies one of the study group members, Academy Professor Jaakko Kaprio, from the University of Helsinki and National Institute for Health and Welfare, referring to their previous publication on cause-specific mortality on SAH survivors (Korja et al., Neurology, 2013).

Staring at Yourself During Virtual Chats May Worsen Your Mood

Many of the previous studies on the epidemiology of SAH have relied on retrospective and single-center databases, which are unfortunately not very reliable data sources. Due to the unique health care system and common academic interest among doctors in Nordic countries, it has been possible to conduct high-quality and unbiased studies on SAH. We hope that our studies truly help doctors and patients, and are not only of interest in coffee tables on university campuses, says neurosurgeon Korja, and rushes to continue his working day in the operation room in Macquarie University Hospital, Sydney, which is one of his current appointments.

Notes about this neurology and epidemiology research