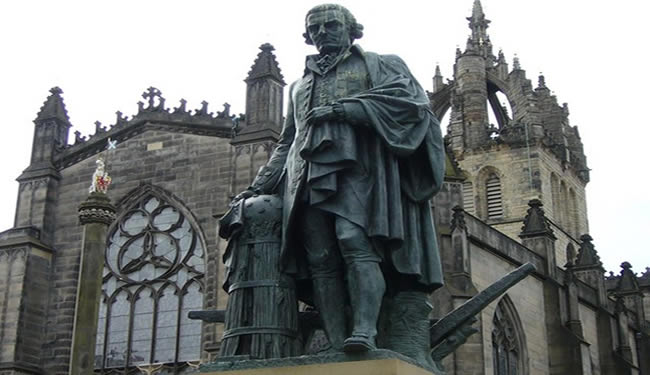 The part of the brain we use when engaging in egalitarian behavior may also be linked to a larger sense of morality, researchers have found. Their conclusions, which offer scientific support for Adam Smith’s theories of morality, are based on experimental research published in the latest issue of the Proceedings of the National Academy of Sciences.

Previous scholarship has established that two areas of the brain are active when we behave in an egalitarian manner—the ventromedial prefrontal cortex (vmPFC) and the insular cortex, which are two neurological regions previously shown to be related to social preferences such as altruism, reciprocity, fairness, and aversion to inequality. Less clear, however, is how these parts of the brain may also be connected to egalitarian behavior in a group setting.

To explore this possibility, the researchers conducted an experiment in which individuals played a game to gauge brain activity in decision-making. In the “random income game” participants in a group are randomly assigned a level of income and the group is assigned to one of three income distributions. Subjects are shown the income of all members of their group, including their own, on a computer screen. Individuals are then asked if they wish to pay a cost in order to increase or decrease the incomes of group members. Subjects are told they may keep the money they don’t give away to the others shown on their screen, so there is a strong incentive not to part with any of the money already allocated to them. Nonetheless, the researchers found that the study’s subjects frequently sought to reallocate resources so the money was more equally distributed among the group members.

During this period, the researchers gauged the subjects’ neurological activity through functional magnetic resonance imaging (fMRI). As shown in previous studies, the researchers found significant activity in the brain’s vmPFC and insular cortex.

But to get at a more detailed understanding of neurological activity during these behaviors, they also examined whether activations in these areas were associated with two additional measures of egalitarian preferences elicited outside of the fMRI. As part of a survey, subjects were asked their level of agreement or disagreement to six questions, which included: “Our society should do whatever is necessary to make sure that everyone has an equal opportunity to succeed” and “This country would be better off if we worried less about how equal people are.” In addition, subjects completed a series of decision-making tasks asking them to split money with another anonymous person. The choices individuals make in this task are a measure of egalitarian behavior.

The researchers found that these two measures of egalitarian preferences were significantly associated with activations in the insular cortex, but not with the vmPFC.

This particular result is a potentially profound one as the insular cortex is also the part of the brain that processes the relationship of the individual with respect to her or his environment. In other words, egalitarian behavior may not exist in isolation, neurologically speaking, but, rather, be part of a larger process that stems from altruism and a sense of the larger social good.

Adam Smith, in The Theory of Moral Sentiments, expressed this perspective in his 18th-century essay.

“Adam Smith contended that moral sentiments like egalitarianism derived from a ‘fellow-feeling’ that would increase with our level of sympathy for others, predicting not merely aversion to inequity, but also our propensity to engage in egalitarian behaviors,” the researchers wrote. “The evidence here supports such an interpretation—our results suggest that it is the brain mechanisms involved in experiencing the emotional and social states of self and others that appear to be driving egalitarian behaviors. This conclusion is consistent with a broader view of the insular cortex as a neural substrate that processes the relationship of the individual with respect to his or her environment.”