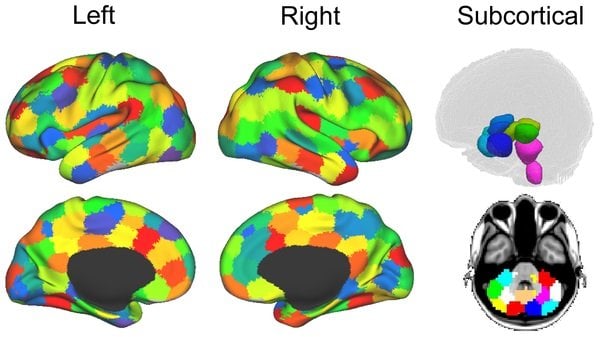 Monti and his colleagues used functional magnetic resonance imaging (fMRI) to study how the flow of information in the brains of 12 healthy volunteers changed as they lost consciousness under anesthesia with propofol. This image shows the parcellation of brain data into 194 cortical, subcortical and cerebellar ROIs. Credited to PLOS Computational Biology/Monti et al.
Home
Featured

UCLA psychologists have used brain-imaging techniques to study what happens to the human brain when it slips into unconsciousness. Their research, published Oct. 17 in the online journal PLOS Computational Biology, is an initial step toward developing a scientific definition of consciousness.

“In terms of brain function, the difference between being conscious and unconscious is a bit like the difference between driving from Los Angeles to New York in a straight line versus having to cover the same route hopping on and off several buses that force you to take a ‘zig-zag’ route and stop in several places,” said lead study author Martin Monti, an assistant professor of psychology and neurosurgery at UCLA.

Monti and his colleagues used functional magnetic resonance imaging (fMRI) to study how the flow of information in the brains of 12 healthy volunteers changed as they lost consciousness under anesthesia with propofol. The participants ranged in age from 18 to 31 and were evenly divided between men and women.

The psychologists analyzed the “network properties” of the subjects’ brains using a branch of mathematics known as graph theory, which is often used to study air-traffic patterns, information on the Internet and social groups, among other topics.

“It turns out that when we lose consciousness, the communication among areas of the brain becomes extremely inefficient, as if suddenly each area of the brain became very distant from every other, making it difficult for information to travel from one place to another,” Monti said.

The finding shows that consciousness does not “live” in a particular place in our brain but rather “arises from the mode in which billions of neurons communicate with one another,” he said.

When patients suffer severe brain damage and enter a coma or a vegetative state, Monti said, it is very possible that the sustained damage impairs their normal brain function and the emergence of consciousness in the same manner as was seen by the life scientists in the healthy volunteers under anesthesia.

“If this were indeed the case, we could imagine in the future using our technique to monitor whether interventions are helping patients recover consciousness,” he said.

“It could, however, also be the case that losing consciousness because of brain injury affects brain function through different mechanisms,” said Monti, whose research team is currently addressing this question in another study.

“As profoundly defining of our mind as consciousness is, without having a scientific definition of this phenomenon, it is extremely difficult to study,” Monti noted. This study, he said, marks an initial step toward conducting neuroscience research on consciousness.

The research was conducted at Belgium’s University Hospital of Liege.

Monti’s expertise includes cognitive neuroscience, the relationship between language and thought, and how consciousness is lost and recovered after severe brain injury. He was part of a team of American and Israeli brain scientists who used fMRI on former Israeli Prime Minister Ariel Sharon in January 2013 to assess his brain responses.

Surprisingly, Sharon, who was presumed to be in a vegetative state since suffering a brain hemorrhage in 2006, showed significant brain activity, Monti and his colleagues reported.

Clearance of Protein Linked to Alzheimer’s Controlled by Circadian Cycle

The former prime minister was scanned to assess the extent and quality of his brain processing, using methods recently developed by Monti and his colleagues. The scientists found subtle but encouraging signs of consciousness.

Notes about this consciousness and neuroimaging research

Co-authors of the current research included Evan Lutkenhoff, a UCLA postdoctoral scholar in Monti’s laboratory; Mikahil Rubinov of Cambridge University in the U.K.; and Steven Laureys, who leads the Coma Science Group at the Cyclotron Research Center and the department of neurology at Belgium’s Sart Tilman Liege University Hospital.

The study was funded primarily by the James S. McDonnell Foundation.