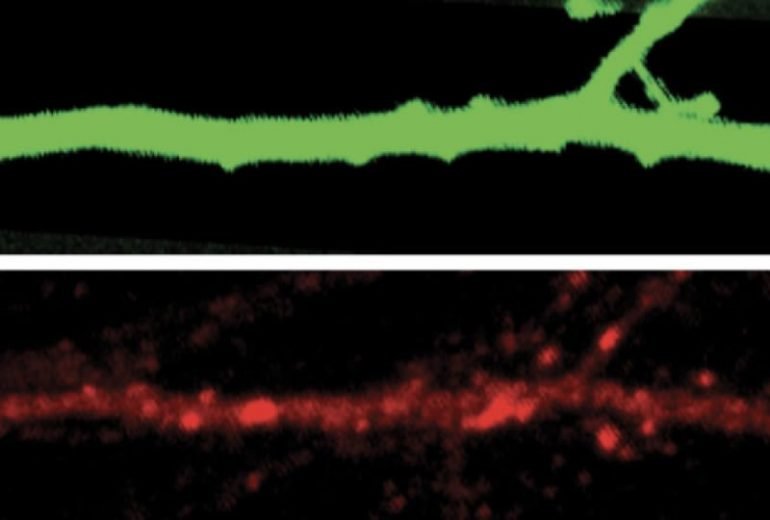 Neurons in mice missing a gene called SHANK3 do not respond well to changes in sensory input. Image is credited to Brandeis University.

Summary: Findings support the idea that lithium, a drug more commonly associated with the treatment of bipolar disorder, may help treat those with SHANK3 related autism.

The mood-stabilizing drug lithium eases repetitive behaviors seen in mice missing SHANK3, an autism gene, according to a new study.

The findings suggest lithium merits further study as a treatment for some people with autism, even though the drug has troublesome side effects, including tremors and impaired memory.

“Lithium is, of course, a rather difficult, non-ideal treatment,” says lead investigator Gina Turrigiano, professor of vision science at Brandeis University in Waltham, Massachusetts. “It’s really hard to get people on a lithium regimen that they can tolerate well.” But understanding why lithium works may set the stage for better treatments, she says.

About 1 percent of people with autism have mutations in SHANK3. Deletion or mutation of the gene can also lead to Phelan-McDermid syndrome, which is characterized by intellectual disability, delayed speech and, often, autism.

Previous work has shown that SHANK3 helps stabilize neuronal circuits by adjusting excitatory and inhibitory signaling like a thermostat. This process, called homeostatic plasticity, allows neurons to respond to changes in sensory input.

The new study suggests the gene controls this thermostat by regulating how frequently neurons fire and how they adjust the electrical currents flowing through them. SHANK3 loss or mutation prevents neurons from adapting to changes in sensory input.

“What we’ve shown is there’s this cellular mechanism, and loss of that mechanism is a direct result of a loss of SHANK3,” Turrigiano says.

The team first recorded electrical activity in rat neurons in which SHANK3 expression was partially disrupted. They artificially blocked the neurons’ ability to fire. The mutant neurons’ rate of firing did not return to its original range afterward as it did in control cells, the team found.

The neurons also responded with less electrical activity than controls did when the researchers blocked and then restarted electrical currents. This suggests the mutant neurons had lost their ability to adjust the current flowing through them.

Excitatory neurons in the cortex called pyramidal cells are most strongly affected. Lithium restored the cells’ ability to adjust both their firing rates and how much current they carry.

To examine how neurons in mice lacking SHANK3 respond to changes in sensory input, the team implanted electrode arrays into the visual cortex of the mutant mice and controls and glued one eye shut in each mouse.

Over the following three or four days, the neurons in both groups of mice decreased how frequently they fired. But the decrease in the mutant mice was more gradual, suggesting that they take longer to adjust.

Neurons in the control mice returned to their typical firing rate two days after the rate had slowed to its lowest level, presumably because the mice’s brains had adapted to the loss of vision in one eye. But in the mutant mice, the neurons never returned to their original firing rates, indicating that without the gene, their brains could not adapt.

The mutant mice also groom themselves excessively, a behavior that is thought to align with obsessive or repetitive behaviors in people. To the researchers’ surprise, lithium stopped this behavior entirely. The work appeared in March in Neuron.

The findings support the idea that lithium may help treat people with SHANK3 mutations, and perhaps those with other forms of autism as well, says Jean Martin Beaulieu, associate professor of psychiatry and neurosciences at the University of Toronto in Canada, who was not involved in the study.

However, he says, the study does not prove that the problems with homeostatic plasticity cause the repetitive behavior. Overgrooming is a complex behavior involving multiple brain areas, he says, whereas the study examined only the visual cortex.

It is also unclear whether lithium acts directly on SHANK3 or on some other target in the circuit, says Thomas Bourgeron, professor of genetics at the Institut Pasteur in Paris, France, who was not involved in the study.

Turrigiano says the loss of SHANK3 may be just the first step in a process that leads to neurons’ inability to adapt to sensory input. Identifying which part of that process lithium corrects may point to new targets for treatment, she says.

Turrigiano’s team is studying how SHANK3 helps balance excitatory and inhibitory activity of neurons, to better understand its role in maintaining homeostatic plasticity.

Autism-Associated Shank3 Is Essential for Homeostatic Compensation in Rodent V1

Summary
Mutations in Shank3 are strongly associated with autism spectrum disorders and neural circuit changes in several brain areas, but the cellular mechanisms that underlie these defects are not understood. Homeostatic forms of plasticity allow central circuits to maintain stable function during experience-dependent development, leading us to ask whether loss of Shank3 might impair homeostatic plasticity and circuit-level compensation to perturbations. We found that Shank3 loss in vitro abolished synaptic scaling and intrinsic homeostatic plasticity, deficits that could be rescued by treatment with lithium. Further, Shank3 knockout severely compromised the in vivo ability of visual cortical circuits to recover from perturbations to sensory drive. Finally, lithium treatment ameliorated a repetitive self-grooming phenotype in Shank3 knockout mice. These findings demonstrate that Shank3 loss severely impairs the ability of central circuits to harness homeostatic mechanisms to compensate for perturbations in drive, which, in turn, may render them more vulnerable to such perturbations.

Lithium as a rescue therapy for regression and catatonia features in two SHANK3 patients with autism spectrum disorder: case reports

Conclusion
These cases support the hypothesis of a specific SHANK3 phenotype. This phenotype might be linked to catatonia-like deterioration for which lithium use could be an efficient treatment. Therefore, these cases provide an important contribution to the field of autism research, clinical genetics and possible pharmacological answers.