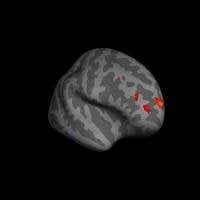 Neuroscience researchers have discovered the anterior prefrontal cortex appears to be larger in people with strong introspective abilities. Additionally, the structure of white matter within this area of the brain is also linked to the process of introspection.

A specific region of the brain appears to be larger in individuals who are good at turning their thoughts inward and reflecting upon their decisions, according to new research published in the journal Science. This act of introspection, or “thinking about your thinking,” is a key aspect of human consciousness, though scientists have noted plenty of variation in peoples’ abilities to introspect.

The new study will be published in the 17 September issue of the journal Science. Science is published by AAAS, the nonprofit science society.

In light of their findings, this team of researchers, led by Prof. Geraint Rees from University College London, suggests that the volume of gray matter in the anterior prefrontal cortex of the brain, which lies right behind our eyes, is a strong indicator of a person’s introspective ability. Furthermore, they say the structure of white matter connected to this area is also linked to this process of introspection.

It remains unclear, however, how this relationship between introspection and the two different types of brain matter really works. These findings do not necessarily mean that individuals with greater volume of gray matter in that region of the brain have experienced, or will experience, more introspective thoughts than other people. But, they do establish a correlation between the structure of gray and white matter in the prefrontal cortex and the various levels of introspection that individuals may experience.

In the future, the discovery may help scientists understand how certain brain injuries affect an individual’s ability to reflect upon their own thoughts and actions. With such an understanding, it may eventually be possible to tailor appropriate treatments to patients, such as stroke victims or those with serious brain trauma, who may not even understand their own conditions.

“Take the example of two patients with mental illness—one who is aware of their illness and one who is not,” said one of the study’s authors, Stephen Fleming from University College London. “The first person is likely to take their medication, but the second is less likely. If we understand self-awareness at the neurological level, then perhaps we can also adapt treatments and develop training strategies for these patients.”

This new study was born from collaboration between Rees’ group, which investigates consciousness, and another group at University College London led by Prof. Ray Dolan, which studies decision-making. Fleming, together with co-author Rimona Weil, designed an experiment to measure both an individual’s performance at a task, as well as how confident that individual felt about his or her decisions during the task. By taking note of how accurately the study’s participants were able to judge their own decision-making, the researchers were able to gain insight into the participants’ introspective abilities.

To begin, Fleming and Weil recruited 32 healthy human participants and showed them two screens, each containing six patterned patches. One of the screens, however, contained a single patch that was brighter than all the rest. The researchers asked the participants to identify which screen contained the brighter patch, and then to rate how confident they felt about their final answer. After the experiment, participants’ brains were scanned using magnetic resonance imaging, or MRI.

Fleming and the researchers designed the task to be difficult, so that participants were never completely sure if their answer was correct. They reasoned that participants who are good at introspection would be confident after making correct decisions about the patch, and less confident when they were incorrect about the patch. By adjusting the task, the researchers ensured all of the participants’ decision making abilities were on par with each others. ‘ Only the participants’ knowledge of their own decision-making abilities differed.

“It’s like that show, ‘Who Wants to Be a Millionaire?'” said Weil. “An introspective contestant will go with his or her final answer when they are quite sure of it, and perhaps phone a friend when they are unsure. But, a contestant who is less introspective would not be as effective at judging how likely their answer is to be correct.”

So, although each participant performed equally well at the task, their introspective abilities did vary considerably, the researchers confirmed. By comparing the MRI scans of each participant’s brain, they could then identify a correlation between introspective ability and the structure of a small area of the prefrontal cortex. An individual’s meta-cognitive, or “higher-thinking,” abilities were significantly correlated with the amount of gray matter in the right anterior prefrontal cortex and the structure of neighboring white matter, Rees and his team found.

These findings, however, could reflect the innate differences in our anatomy, or alternatively, the physical effects of experience and learning on the brain. The latter possibility raises the exciting prospect that there may be a way to “train” meta-cognitive abilities by exploiting the malleable nature of these regions of prefrontal cortex. But, more research is needed to explore the mental computations behind introspection, and then to link these computations to actual biological processes.

“We want to know why we are aware of some mental processes while others proceed in the absence of consciousness,” said Fleming. “There may be different levels of consciousness, ranging from simply having an experience, to reflecting upon that experience. Introspection is on the higher end of this spectrum. By measuring this process and relating it to the brain we hope to gain insight into the biology of conscious thought.”