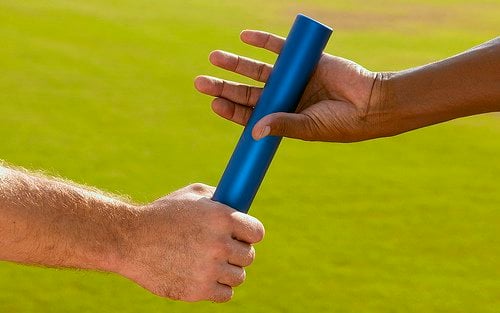 In the research study, participants first completed a series of individual tasks requiring them to pick up a cylindrical object with one hand, pass it to their other hand, and then place it on a shelf. In the collaborative tasks, individuals picked up the object and handed it to their partner, who placed it on the shelf. This illustrative image shows two hands passing a baton to one another.
Home
Featured

The day of the big barbecue arrives and it’s time to fire up the grill. But rather than toss the hamburgers and hotdogs haphazardly onto the grate, you wait for the heat to reach an optimal temperature, and then neatly lay them out in their apportioned areas according to size and cooking times. Meanwhile, your friend is preparing the beverages. Cups are grabbed face down from the stack, turned over, and – using the other hand – filled with ice.

While these tasks – like countless, everyday actions – may seem trivial at first glance, they are actually fairly complex, according to Robrecht van der Wel, an assistant professor of psychology at Rutgers–Camden. “For instance, the observation that you grab a glass differently when you are filling a beverage than when you are stacking glasses suggests that you are thinking about the goal that you want to achieve,” he says. “How do you manipulate the glass? How do you coordinate your actions so that the liquid goes into the cup? These kinds of actions are not just our only way to accomplish our intentions, but they reveal our intentions and mental states as well.”

van der Wel and his research partners, Marlene Meyer and Sabine Hunnius, turned their attention to how action planning generalizes to collaborative actions performed with others in a study titled” Higher-order planning for individual and joint object manipulations”, published recently in Experimental Brain Research.

According to van der Wel, the researchers were especially interested in determining whether people’s actions exhibit certain social capabilities when performing multiple-action sequences in concert with a partner. “It is a pretty astonishing ability that we, as people, are able to plan and coordinate our actions with others,” says van der Wel. “If people plan ahead for themselves, what happens if they are now in a task where their action might influence another person’s comfort? Do they actually take that into account or not, even though, for their personal action, it makes no difference?”

In the research study, participants first completed a series of individual tasks requiring them to pick up a cylindrical object with one hand, pass it to their other hand, and then place it on a shelf. In the collaborative tasks, individuals picked up the object and handed it to their partner, who placed it on the shelf. The researchers varied the height of the shelf, to test whether people altered their grasps to avoid uncomfortable end postures. The object could only be grasped at one of two positions, implying that the first grasp would determine the postures – and comfort – of the remaining actions.

According to the researchers, the results from both the individual and joint performances show that participants altered their grasp location relative to the height of the shelf. The participants in both scenarios were thus more likely to use a low-grasp location when the shelf was low, and vice versa. Doing so implied that the participants ended the sequences in comfortable postures. The researchers conclude that, in both individual and collaborative scenarios, participants engaged in extended planning to finish the object-transport sequences in a relatively comfortable posture. Given that participants did plan ahead for the sake of their action partner, it indicates an implicit social awareness that supports collaboration across individuals.

van der Wel notes that, while such basic actions may seem insignificant, it is important to understand how people perform basic tasks such as manipulating objects when considering those populations that aren’t able to complete them so efficiently. “How to pick up an object seems like a really trivial problem when you look at healthy adults, but as soon as you look at children, or people suffering from a stroke, it takes some time to develop that skill properly,” says van der Wel. “When someone has a stroke, it is not that they have damage to the musculature involved in doing the task; rather, damage to action planning areas in the brain results in an inability to perform simple actions. A better understanding of the mechanisms involved in action planning may guide rehabilitation strategies in such cases.”

According to van der Wel, the researchers are currently working on modifying the task to determine the age at which children begin planning their actions with respect to other peoples’ comfort. In particular, they want to understand how the development of social action planning links with the development of other cognitive and social abilities.

Exposure to Sun, Heat and Humidity Can Exacerbate Symptoms of Mental Disorders