What triggers nostalgia? Feelings of unhappiness

Summary: While generally associated with positive feeling, nostalgia is actually a mixed emotion. When experienced over the course of daily life, nostalgia is predominantly a negative emotion.

For years, research has shown that nostalgia is a primarily positive emotion that can lift people’s spirits. But USC Dornsife psychologists have found the opposite may be true. Just like in Bruce Springsteen’s nostalgic song Glory Days, people look back to the good times when they feel dissatisfied with their current life.

“Nostalgia is a mixed emotion,” said David Newman, the study’s lead author and a Ph.D. candidate at USC Dornsife College of Letters, Arts and Sciences. “It also is negative. We found that people are most likely to think of the good old days when something goes wrong in the present.”

In prior studies on nostalgia, participants were asked to recall a past event that makes them feel most nostalgic. However, the USC Dornsife team thought that approach tends to result in people recalling a unique and overly positive, fond memory. The approach overlooks the fact that people may have different nostalgic feelings or memories every day, depending on whether they are experiencing a good day or a bad day, and that those feelings can vary in intensity.

“When people are asked to describe something that makes them feel very nostalgic, the positive elements dominate,” Newman said. “They think of a pleasant past experience, and the memories they bring to mind have a positive influence on how they see their own life.”

So, the USC Dornsife team conducted several studies that capture how frequently people may feel nostalgic and how intense their feelings are in daily life. The psychologists asked about 230 undergraduate students, in exchange for course credit, to complete daily questionnaires for 14 days.

These diary studies included questions about whether they had positive or negative interactions with friends or acquaintances, experienced positive moments of achievement or negative moments, such as falling behind on course work. They also asked about events that could potentially evoke feelings of nostalgia, such as whether the participants had heard a song on the radio that they hadn’t heard in a while.

People were likely to feel nostalgic when things were going wrong in the present. 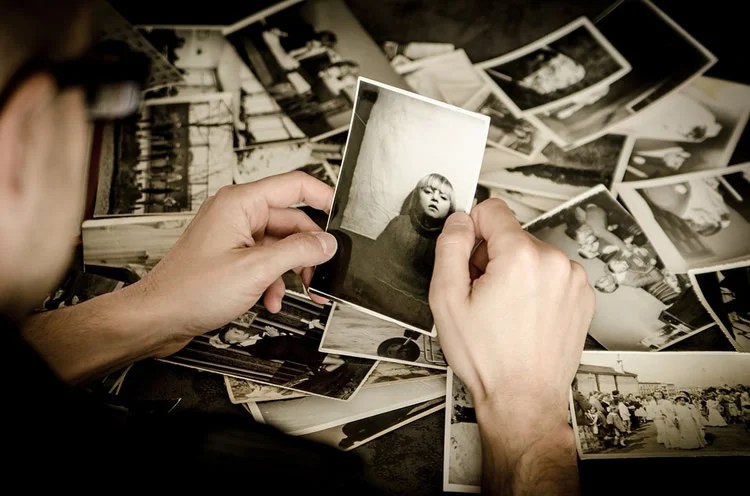 Nostalgia, long believed to be a generally positive emotion, may in fact have its roots in negative feelings. The image is in the public domain.

“These negative experiences colored nostalgia in a negative light,” Newman said. On days when people felt nostalgic, they reported feeling more stressed, depressed and lonely; expressed more regret and rumination; were less satisfied with their life; and reported lower self-esteem. They also felt less peaceful and calm and expressed more rumination on the following day.

Although people tend to feel nostalgic when they have had negative experiences, the team of psychologists found another surprising positive correlation.

People were likely to feel nostalgic on days “when they had helped others, were reminded of old friendships or music, felt inspired and engaged in social media use,” the psychologists wrote.

Based on their analyses of the findings, Newman and colleagues concluded that nostalgia is a mixed emotion — but the mix is decidedly negative in day-to-day life.

“The results from these studies stand in sharp contrast to the prevailing conclusion from previous research, which had indicated that nostalgia is a mixed but predominantly positive emotion,” Newman said.

“Deliberately engaging in the recollection of extremely nostalgic moments may improve well-being,” he said. “But in most situations in daily life, feeling nostalgic may not feel very pleasant.”

The study appears in the Journal of Personality and Social Psychology.

Funding: The study was supported by a grant from the National Institute on Aging, Royal Center to Princeton University (P30AG024928), awarded to Stone.

Nostalgia and well-being in daily life: An ecological validity perspective

Nostalgia is a mixed emotion. Recent empirical research, however, has highlighted positive effects of nostalgia, suggesting it is a predominantly positive emotion. When measured as an individual difference, nostalgia-prone individuals report greater meaning in life and approach temperament. When manipulated in an experimental paradigm, nostalgia increases meaning in life, self-esteem, optimism, and positive affect. These positive effects may result from the specific experimental procedures used and little is known about daily experiences that covary with nostalgia. To address this gap, we aimed to measure nostalgia in ecologically valid contexts. We created and validated the Personal Inventory of Nostalgic Experiences (PINE) scale (Studies 1a–1d) to assess both trait and state-based nostalgic experiences. When measured as an individual difference, the nomological net was generally negative (Study 2). When measured in daily life (Studies 3 and 4), nostalgia as a state variable was negatively related to well-being. Lagged analyses showed that state nostalgia had mixed effects on well-being at a later moment that day and negative effects on well-being on the following day. To reconcile the discrepancies between these studies and the positive effects of nostalgia from previous research, we showed that experimentally induced nostalgic recollections were rated more positively and less negatively than daily experiences of nostalgia (Study 5). These studies show that nostalgia is a mixed emotion; although it may be predominantly positive when nostalgic memories are generated on request, it seems predominantly negative when nostalgia is experienced in the course of everyday life.