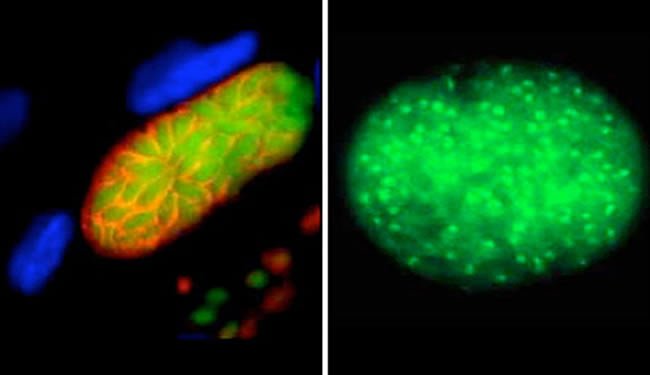 Scientists have identified which strains of the Toxoplasma gondii parasite, the cause of toxoplasmosis, are most strongly associated with premature births and severe birth defects in the United States. The researchers used a new blood test developed by scientists at the National Institute of Allergy and Infectious Diseases (NIAID), part of the National Institutes of Health, to pinpoint T. gondii strains that children acquire from their acutely infected mothers while in the womb.

Pregnant women can become infected with T. gondii through contact with cat feces that contain infectious forms of the parasite or by eating undercooked meat. Women who become infected while pregnant may miscarry, give birth prematurely, or have babies with eye or brain damage.

“If undetected or untreated, congenital toxoplasmosis can have serious consequences for a child’s quality of life,” noted NIAID Director Anthony S. Fauci, M.D. “The findings from this study support the value of screening for toxoplasmosis to identify patients who could benefit from treatment.”

Currently available blood tests can determine whether a person has ever been infected with any strain of Toxoplasma parasite. The experimental test developed at NIAID improves upon the older tests because it can detect the presence of strain-specific antibodies that distinguish infecting strains from one another. The test was developed by Michael Grigg, Ph.D., of NIAID’s Laboratory of Parasitic Diseases, and his colleagues. It was applied to blood samples collected between 1981 and 2009 as part of the National Collaborative Chicago-Based Congenital Toxoplasmosis Study. The study of congenitally infected children was initiated by NIAID grantee Rima McLeod, M.D., of the University of Chicago, who is the first author of the new study, published online in Clinical Infectious Diseases.

At least 15 distinct T. gondii strain types have been found throughout the world. In France, where research has been done to establish which strains are most common, a strain called type II predominates. Type II parasites can be distinguished from all other strains, which are collectively termed not exclusively type II strains (or NE-II).

Using the new test, the researchers found evidence of either type II or NE-II infections in 183 of the mother-child pairs in the national congenital toxoplasmosis study. Statistical analysis revealed that NE-II parasites were more likely to be associated with premature birth, and infants infected with these strains were more likely to have severe manifestations of disease than infants infected by type II parasites. For example, severe eye damage was seen in 67 percent of NE-II cases (59 out of 88), while such eye damage was present in only 39 percent of type II cases (18 out of 46). The researchers noted, however, that the association is not absolute, and that mild, moderate or severe disease can result regardless of the infecting strain.

“We knew that, in mice, certain parasite strains are clearly associated with severe disease,” said Dr. Grigg. “But we didn’t know if the same association between strain type and disease severity would hold true for people. Until now, we had not systematically determined whether infected people in the United States had European-type strains or other types, and we also hadn’t determined whether strains found here would have more severe disease symptoms associated with them.”

When she helped start the congenital toxoplasmosis study in 1981, optimal drug treatment regimens were unknown, said Dr. McLeod. Now, thanks in part to controlled clinical trials run under the auspices of the study, the condition can be successfully treated and many babies who are diagnosed before or shortly after birth and who are treated suffer few or no ill effects. When the researchers looked at the clinical histories of those children in the long-term study who had been diagnosed with congenital toxoplasmosis during gestation and whose mothers had received drug treatment prior to giving birth, the association between NE-II and severe disease at birth vanished. “Our study demonstrates that outcomes are equally good following postnatal treatment for type II and NE-II parasites, although not all outcomes are favorable for all children,” she said.

In France, all pregnant women are screened for Toxoplasma infection. Prompt treatment is offered to any woman who becomes infected while pregnant, thus lessening the chance that the parasite will damage the fetus, Dr. McLeod noted. “In the United States, obstetrical screening for Toxoplasma infection is rarely practiced. This new study underscores the value of identifying all patients who will benefit from treatment and suggests that widespread screening and treatment of pregnant women who are infected could prevent infants from suffering eye and brain damage due to congenital toxoplasmosis,” she said.

Unlike in France, where type II is the most common strain detected, the new study found that NE-II parasites predominated (61 percent) in the United States over the three-decade span of the national collaborative study. NE-II parasites were more common than type II along the Gulf Coast, the Pacific coast and in Hawaii. NE-II strains were also more common among lower-income and rural populations.

Funding: This work was funded by NIH, NIAID, under grant number R01AI027530. The clinicaltrials.gov identifier for the Pyrimethamine, Sulfadiazine, and Leucovorin in Treating Patients with Congenital Toxoplasmosis study is NCT00004317.