For the first time, researchers at the UNC School of Medicine showed they could target one brain region with a weak alternating current of electricity, enhance the naturally occurring brain rhythms of that region, and significantly decrease symptoms associated with chronic lower back pain.

The results, published in the Journal of Pain and presented at the Society for Neuroscience conference in San Diego this week, suggest that doctors could one day target parts of the brain with new noninvasive treatment strategies, such as transcranial alternating current stimulation, or tACS, which researchers used in this study to boost the naturally occurring brain waves they theorized were important for the treatment of chronic pain.

“We’ve published numerous brain stimulation papers over several years, and we always learn something important,” said senior author Flavio Frohlich, PhD, director of the Carolina Center for Neurostimulation and associate professor of psychiatry. “But this is the first time we’ve studied chronic pain, and this is the only time all three elements of a study lined up perfectly. We successfully targeted a specific brain region, we enhanced or restored that region’s activity, and we correlated that enhancement with a significant decrease in symptoms.”

Co-first author Julianna Prim, a graduate student mentored by Karen McCulloch, PT, PhD, in the Department of Allied Health Sciences at the UNC School of Medicine, who works closely with Frohlich’s lab, said, “If brain stimulation can help people with chronic pain, it would be a cheap, non-invasive therapy that could reduce the burden of opioids, which we all know can have severe side effects.”

Chronic pain is the leading cause of disability in the world, but there is not consensus among scientists that brain activity plays a causal role in the condition. Frohlich says the pain research field has focused largely on peripheral causes of chronic pain. For example, if you have chronic lower back pain, then the cause and solution lie in the lower back and related parts of the nervous system in the spine. But some researchers and clinicians believe chronic pain runs deeper, that the condition can reorganize how cells in the nervous system communicate with each other, including networks of neurons in the brain. Over time, the theory goes, these networks get stuck in a kind of neural rut, essentially becoming a cause of chronic pain.

Previous studies showed that people with chronic pain experience abnormal neural oscillations, or brain waves. There are several kinds of brain waves related to different brain regions and various kinds of brain activities – processing visual stimuli, memorization, creative thinking, etc. When we speak, think, eat, play sports, watch television, daydream, or sleep, our brain activity creates electrical patterns researchers can measure using electroencephalograms, or EEGs. These patterns fluctuate or oscillate, which is why they appear as waves that rise and fall on an EEG printout.

One type of brain activity is called alpha oscillations, which occur when we are not taking in stimuli. When we meditate in silence, daydream in the shower, or even when we’re “in the zone” during athletic activity, alpha oscillations dominate the brain. Frohlich’s lab wanted to know if these alpha oscillations were deficient in the somatosensory cortex, located in the middle portion of the brain and likely involved in chronic pain. If so, then could Frohlich’s team enhance the alpha waves there? And if that were possible, would there be any pain relief?

Prim and colleagues recruited 20 patients with lower chronic back pain. Each of them reported back pain as “four” or greater for at least six months on the subjective scale of one to 10. Each participant volunteered for two 40-minute sessions that took place one to three weeks apart.

During all sessions, researchers attached an array of electrodes to the scalps of patients. During one session, researchers targeted the somatosensory cortex using tACS to enhance the naturally occurring alpha waves. During another session for all participants, researchers used a similar weak electrical current that was not targeted – this was a sham or placebo stimulation session. During all sessions, participants felt tingling on their scalp. They could not tell the difference between the sham and tACS sessions. Also, the researchers in charge of analyzing the data did not know when each participant underwent the sham or tACS sessions, making this study double-blinded. 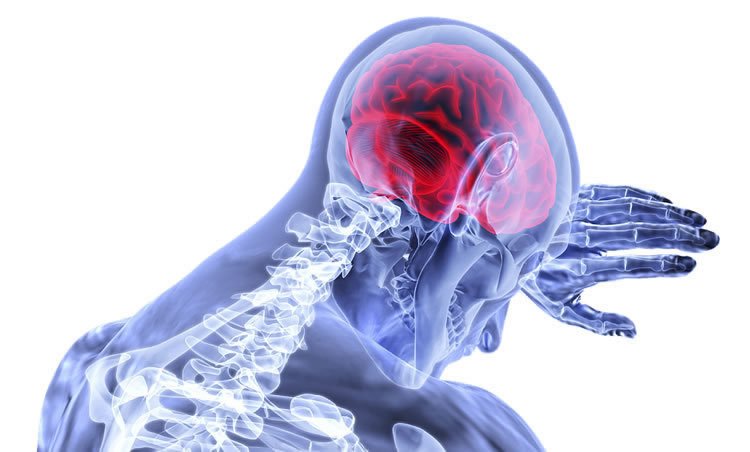 Chronic pain is the leading cause of disability in the world, but there is not consensus among scientists that brain activity plays a causal role in the condition. NeuroscienceNews.com image is in the public domain.

Co-first author Sangtae Ahn, PhD, a postdoc in Frohlich’s lab, analyzed the data, which showed that Frohlich’s team could indeed successfully target and enhance alpha oscillations in the somatosensory cortex of people with chronic lower back pain. When Prim and colleagues surveyed the participants, all of them reported a significant reduction in pain immediately following the tACS sessions, according to the subjective 0-10 pain scale. Remarkably, some participants reported feeling no pain after the tACS sessions. Participants did not report the same pain reduction after the sham stimulation sessions.

“The exciting thing is that these results occurred after just one session,” Prim said. “We hope to conduct a larger study to discover the effects of multiple tACS sessions over a longer time period.”

“This study is a perfect example of what’s possible when scientists and clinicians collaborate,” he said. “Ultimately, if we want to develop better treatments, cures, and prevention strategies, then these sorts of new approaches that bring researchers together are of fundamental importance.”

Funding: The National Institutes of Health and the North Carolina Translational and Clinical Sciences (NC TraCS) Institute funded this research.

Transcranial alternating current stimulation is not electroconvulsive therapy (ECT), or shock therapy. The amount of electrical current used for tACS is about 1,000 times less than ECT.

Chronic pain is associated with maladaptive reorganization of the central nervous system. Recent studies have suggested that disorganization of large-scale electrical brain activity patterns such as neuronal network oscillations in the thalamo-cortical system plays a key role in the pathophysiology of chronic pain. Yet, little is known about if and how such network pathologies can be targeted with non-invasive brain stimulation as a non-pharmacological treatment option. We hypothesized that alpha oscillations, a prominent thalamo-cortical activity pattern in the human brain, are impaired in chronic pain and can be modulated with transcranial alternating current stimulation (tACS). We performed a randomized, crossover, double-blind, sham-controlled study in patients with chronic low back pain (CLBP) to investigate how alpha oscillations relate to pain symptoms for target identification and if tACS can engage this target and thereby induce pain relief. We used high-density electroencephalography to measure alpha oscillations and found that the oscillation strength in the somatosensory region at baseline before stimulation was negatively correlated with pain symptoms. Stimulation with alpha-tACS compared to sham (placebo) stimulation significantly enhanced alpha oscillations in the somatosensory region. The stimulation-induced increase of alpha oscillations in the somatosensory region was correlated with pain relief. Given these findings of successful target identification and engagement, we propose that modulating alpha oscillations with tACS may represent a target-specific, non-pharmacological treatment approach for CLBP. This trial has been registered in ClinicalTrials.gov (NCT03243084).