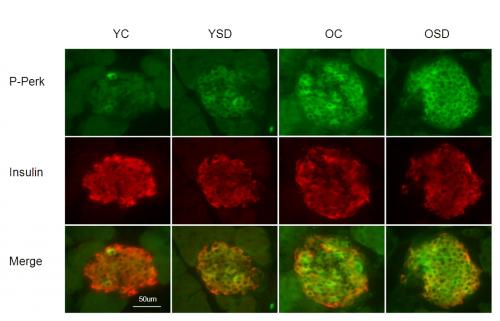 Sleep, or the lack of it, seems to affect just about every aspect of human physiology. Yet, the molecular pathways through which sleep deprivation wreaks its detrimental effects on the body remain poorly understood. Although numerous studies have looked at the consequences of sleep deprivation on the brain, comparatively few have directly tested its effects on peripheral organs.

During sleep deprivation cells upregulate the UPR – the unfolded protein response – a process where misfolded proteins get refolded or degraded.

Five years ago, researchers at the Perelman School of Medicine, University of Pennsylvania, showed that the UPR is an adaptive response to stress induced by sleep deprivation and is impaired in the brains of old mice. Those findings suggested that inadequate sleep in the elderly, who normally experience sleep disturbances, could exacerbate an already-impaired protective response to protein misfolding that happens in aging cells. Protein misfolding and clumping is associated with many diseases such as Alzheimer’s and Parkinson’s, noted Nirinjini Naidoo, Ph.D., research associate professor in the Division of Sleep Medicine in that study.

Naidoo is also senior author of a follow-up study in Aging Cell this month that shows, for the first time, an effect of sleep deprivation on the UPR in peripheral tissue, in this case, the pancreas. They showed that stress in pancreatic cells due to sleep deprivation may contribute to the loss or dysfunction of these cells important to maintaining proper blood sugar levels, and that these functions may be exacerbated by normal aging.

“The combined effect of aging and sleep deprivation resulted in a loss of control of blood sugar reminiscent of pre-diabetes in mice,” says Naidoo. “We hypothesize that older humans might be especially susceptible to the effects of sleep deprivation on the disruption of glucose homeostasis via cell stress.”

Working with Penn colleague Joe Baur, Ph.D., assistant professor of Physiology, Naidoo started a collaboration to look at the relationship of sleep deprivation, the UPR, and metabolic response with age. Other researchers had suggested that the death of beta cells associated with type 2 diabetes may be due to stress in a cell compartment called the endoplasmic reticulum (ER). The UPR is one part of the quality control system in the ER, where some proteins are made.

Knowing this, Naidoo and Baur asked if sleep deprivation (SD) causes ER stress in the pancreas, via an increase in protein misfolding, and in turn, how this relates to aging.

Acute sleep deprivation caused increased plasma glucose levels in both young and old animals. However, this change was not overtly related to stress in beta cells, since plasma insulin levels were not lower following acute lack of sleep.

While changes in insulin secretion are unlikely to play a major role in the acute effects of SD, cellular stress in pancreatic tissue suggests that chronic SD may contribute to the loss or dysfunction of endocrine cells, and that these effects may be exacerbated by normal aging, say the researchers.

Notes about this sleep deprivation and neuroscience research

This study was supported in part by the National Institute of Diabetes and Digestive and Kidney Diseases (DK19525) and the National Institute on Aging (AG23500), and the Ellison Medical Foundation. Baur is also a member of the Institute for Diabetes, Obesity, and Metabolism at Penn. This work was also sponsored by the Center for Sleep and Circadian Neurobiology (CSCN) at Penn and Naidoo is a member of the CSCN.