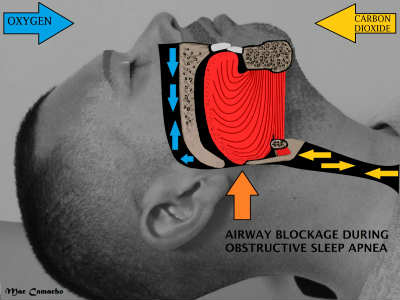 Researchers found 63% of patients with cervical SCI had central sleep apnea, compared wto only 13% of those with thoracic SCI. The image details obstructive sleep apnea, or sleeping with airway obstruction. Oxygen is labeled with blue arrows and carbon dioxide is labeled with yellow arrows. Credit given below.
Home
Featured

There are over a million people with spinal cord injuries (SCI) in the United States alone with an estimated 11,000 new cases every year. Furthermore, it is estimated that there are, at least, 100,000 veterans with SCI, making the VA the largest integrated health care system in the world for SCI care. But despite this large prevalence, researchers are still discovering all the various ways that SCI affect those with this condition beyond the obvious paralysis. For example, researchers have long known that SCI patients are significantly more likely than people without SCI to have conditions that cause disordered breathing during sleep. These include central sleep apnea, a serious condition in which patients’ breathing stops periodically during sleep due to faulty signals from the brain. However, it’s been unknown whether the level of injury has any correlation with the risk of sleep-disordered breathing.

To investigate this question, Abdulghani Sankari and his colleagues at John D. Dingell VA Medical Center-Wayne State University studied breathing during sleep in eight patients with thoracic SCIs, which paralyzed their legs, and eight patients with cervical SCI, which paralyzed their torsos and all four limbs. They found that those subjects with cervical SCI were significantly more likely to have sleep-disordered breathing during sleep or be susceptible to factors that trigger it. These findings suggest that patients who are paralyzed from the neck down—or quadriplegics—have a heightened risk of central sleep apnea.

The article is entitled “Tetraplegia is a Risk Factor for Central Sleep Apnea.” It appears in the Articles in PresS section of the Journal of Applied Physiology, published by the American Physiological Society.

Each of these volunteers underwent initial testing at Detroit VA sleep research laboratory to assess various factors, including their breathing during sleep. Those subjects that testing showed didn’t have central sleep apnea underwent another validated test on a different session at the sleep research laboratory that involved sleeping with a nasal mask connected to a ventilator that periodically induced central sleep apnea and calculated the level of carbon dioxide at which breathing stopped “apneic threshold”. For those that showed central sleep apnea already during baseline testing, the researchers used a different test that involved introducing gas mixed with carbon dioxide to calculate the level required to abolish their central sleep apnea. In addition they assessed the efficiency of SCI individuals’ respiratory system during sleep.

Importance of the Findings

These findings suggest that where the spinal cord is injured—in the neck, or lower—can affect the likelihood and type of breathing problems during sleep, including central sleep apnea. Understanding how and why these patients’ nighttime breathing is affected could help doctors better manage their conditions, the authors say, protecting patients’ and veterans’ health and lives.

Schizophrenia and Bipolar Disorder May Be Detectable Years Before Illnesses Begin

Notes about this spinal cord injury and sleep research

In addition to Abdulghani Sankari, the study team includes Amy Bascom, Susmita Chowdhuri, and M. Safwan Badr, all of Wayne State University. Dr. Sankari is a recipient of Career Development Award from the Veterans Affairs Biomedical Laboratory for Research and Development.