Taking Control of a Rat’s Sense of Familiarity and Novelty

Brown University brain scientists didn’t just study how recognition of familiarity and novelty arise in the mammalian brain, they actually took control, inducing rats to behave as if images they’d seen before were new, and images they had never seen were old.

With pulses of light in the right part of the brain at the right frequencies, Brown University scientists induced rats to behave as if things they’d seen before were novel and things they’d never seen were old hat.

“In a sense we were trying to ‘write in’ novelty and ‘write in’ familiarity,” said Rebecca Burwell, professor of cognitive, linguistic and psychological sciences at Brown and corresponding author of the new paper in the Journal of Neuroscience.

Burwell’s research group was interested in how behaviors associated with recognizing novelty and familiarity arise in the brain. The field already understood what area in mammal brains is important (the perirhinal cortex or PER), but the literature only contained hints that the PER might work based on brainwave patterns there.

“We knew very little about how information about novelty or familiarity is coded or transmitted,” said Burwell, who is affiliated with the Brown Institute for Brain Science.

Now Burwell and her co-authors have demonstrated the exact patterns precisely, achieving such facility of control that they could consistently compel different groups of rodents to do the opposite of what they normally would.

The rats spent most of the time in a simple maze akin to two stalls divided by an opaque wall. Visual images could be presented at the front of each stall. They had days to become acclimated to this environment. Testing sessions entailed introducing a rat to the same black and white image in each stall. After a five-minute respite back in the home cage, the rat returned to the maze to encounter one of three cases: One stall showed a new image and one showed the old; both stalls showed something new; or both still showed the original image.

Just like a person, a normally behaving rat will spend more time looking at a new image than an old one. This is a sign that the people and rats recognize the old item. But in these experiments, Burwell’s team, including lead authors Jonathan Ho and Devon Poeta, altered some of the rats’ behavior by manipulating the brain using optogenetics. That technology allows scientists to control the activation of neurons in any area of the brain that they expose to specific colors of visible light. Burwell, Ho, and the group used this capability to alter activity in the PER by pulsing the light into that part of the brain at different frequencies.

To create different experimental conditions, the researchers would sometimes flicker the lights at different frequencies when the rats entered a stall and looked at the image. In some cases, for instance, if a rat approached a novel image they’d flicker the light at frequencies between 10 and 15 hertz (cycles per second). Sometimes when the rat approached a familiar image they’d flicker it between 30-40 hertz.

During the experiments, researchers including Poeta would painstakingly time how long rats gazed at every image. The human observers did not know whether the image was novel or familiar and were similarly blinded to whether and when the brains of the rats were stimulated with optogenetic light. 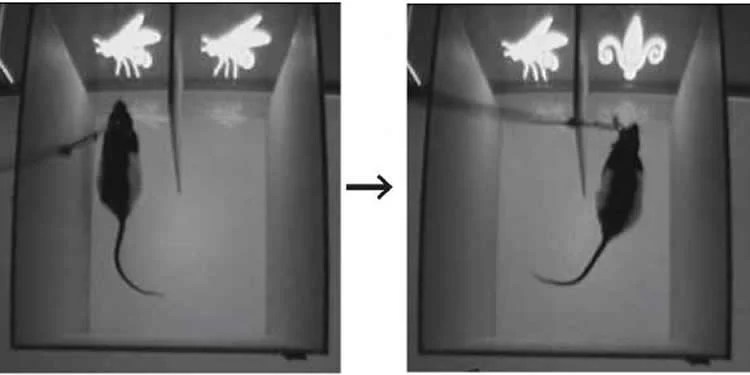 In experiments, researchers introduced rats to images and then showed them both the old and new ones. They found they could control each rat’s sense of whether images were old or novel. Credit: Burwell lab/Brown University.

Over many trials with two independent groups of rats, the researchers’ subsequent analysis showed the same statistically significant patterns. Without optogenetic stimulation, rats would give longer looks at novel images than at familiar ones. With 30 hertz stimulation, rats would look at familiar images longer than they would look at the same familiar image without such stimulation — as if the familiar images were novel. Stimulation at 11 hertz had the opposite effects by reducing the time the rats invested in novel images to the point where they seemed to regard them as familiar.

Other frequencies outside these ranges did not show the same behavioral effects. They confirmed that 30 hertz seems to be optimal for inducing novelty and about 11 hertz works well for inducing familiarity.

When the researchers looked at activity at the cellular level in the rats’ brains, they saw that individual cells stimulated by the optogenetics would increase firing rates in the PER network and that many cells fired in sync with the optical flicker frequency.

The team’s new research has continued to explore these networks on a grander scale, incorporating the PER’s interactions with the prefrontal cortex, where executive decisions are made. That allows them to better understand when and why a rat might choose to explore a novel image or to defer that behavior.

In addition to Ho, Poeta, and Burwell, the paper’s other authors are Tara Jacobson, Timothy Zolnik, Garrett Neske, and Barry Connors.

Perirhinal cortex (PER) has a well established role in the familiarity-based recognition of individual items and objects. For example, animals and humans with perirhinal damage are unable to distinguish familiar from novel objects in recognition memory tasks. In the normal brain, perirhinal neurons respond to novelty and familiarity by increasing or decreasing firing rates. Recent work also implicates oscillatory activity in the low-beta and low-gamma frequency bands in sensory detection, perception, and recognition. Using optogenetic methods in a spontaneous object exploration (SOR) task, we altered recognition memory performance in rats. In the SOR task, normal rats preferentially explore novel images over familiar ones. We modulated exploratory behavior in this task by optically stimulating channelrhodopsin-expressing perirhinal neurons at various frequencies while rats looked at novel or familiar 2D images. Stimulation at 30–40 Hz during looking caused rats to treat a familiar image as if it were novel by increasing time looking at the image. Stimulation at 30–40 Hz was not effective in increasing exploration of novel images. Stimulation at 10–15 Hz caused animals to treat a novel image as familiar by decreasing time looking at the image, but did not affect looking times for images that were already familiar. We conclude that optical stimulation of PER at different frequencies can alter visual recognition memory bidirectionally.