A study of humans and monkeys published in Journal of Neuroscience has found the same subset of neurons encode actual and illusory complex flow motion. This finding supports, at the level of single neurons, what the Czech scientist Jan Purkinje surmised 150 years ago: “Illusions contain visual truth.”

The Pinna-Brelstaff figure is a static image of rings that appear to rotate clockwise as one moves toward and counterclockwise as one moves away from the figure. Having previously identified particular parts of the human brain that represent the Pinna illusion, Junxiang Luo and colleagues at the Institute of Neuroscience, Chinese Academy of Sciences first confirmed that male rhesus macaques likely perceive the illusion similarly to people. 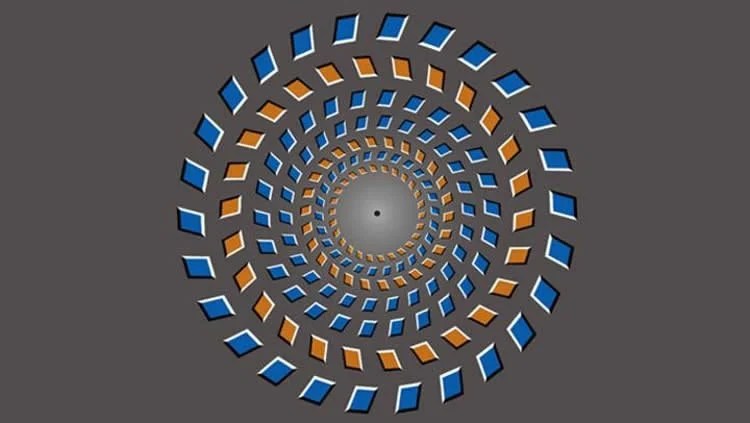 Fixate the black dot and move your head towards and away from the image and you should perceive the rings rotating. NeuroscienceNews.com image is credited to Junxiang Luo.

The researchers then recorded activity from individual neurons in the previously identified brain regions, and discovered cells that signal the illusory motion similarly to actual motion. A delay of about 15 milliseconds enables the brain to register the illusory motion as if it was real.

This study provides new insights into how the brain grapples with the continual mismatch between perception and reality.

Going with the flow: the neural mechanisms underlying illusions of complex-flow motion

Studying the mismatch between perception and reality helps us better understand the constructive nature of the visual brain. The Pinna-Brelstaff motion illusion is a compelling example illustrating how a complex moving pattern can generate illusory motion perception. When an observer moves towards (expansion) or away (contraction) from the Pinna-Brelstaff figure, the figure appears to rotate. The neural mechanisms underlying the illusory complex-flow motion of rotation, expansion and contraction remain unknown. We studied this question at both perceptual and neuronal levels in behaving male-macaques by utilizing carefully parametrized Pinna-Brelstaff figures that induce the above motion illusions. We first demonstrate that macaques perceive illusory motion similarly to human observers. Neurophysiological recordings were subsequently performed in the middle temporal area (MT) and the dorsal portion of the medial superior temporal area (MSTd). We find that subgroups of MSTd neurons encoding a particular global pattern of real complex-flow motion (rotation, expansion, contraction) also represent illusory motion patterns of the same class. They require an extra 15 ms to reliably discriminate the illusion. In contrast, MT neurons encode both real and illusory local motions with similar temporal delays. These findings reveal that illusory complex-flow motion is first represented in MSTd by the same neurons that normally encode real complex-flow motion. However, the extraction of global illusory motion in MSTd from other classes of real complex-flow motion requires extra processing time. Our study illustrates a cascaded integration mechanism from MT to MSTd underlying the transformation from external physical to internal non-veridical flow-motion perception.