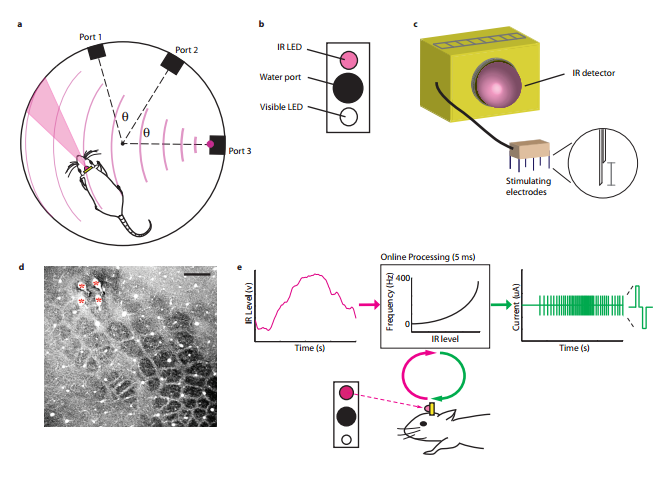 Researchers demonstrated that a novel sensory input could be processed by a cortical region specialized in another sense without "hijacking" the function of this brain area. The discovery suggests that a person whose visual cortex was damaged could regain sight through a neuroprosthesis implanted in another cortical region. Credited to Nicolelis Lab.
Home
Featured

Researchers have given rats the ability to “touch” infrared light, normally invisible to them, by fitting them with an infrared detector wired to microscopic electrodes implanted in the part of the mammalian brain that processes tactile information. The achievement represents the first time a brain-machine interface has augmented a sense in adult animals, said Duke University neurobiologist Miguel Nicolelis, who led the research team.

The experiment also demonstrated for the first time that a novel sensory input could be processed by a cortical region specialized in another sense without “hijacking” the function of this brain area said Nicolelis. This discovery suggests, for example, that a person whose visual cortex was damaged could regain sight through a neuroprosthesis implanted in another cortical region, he said.

Although the initial experiments tested only whether rats could detect infrared light, there seems no reason that these animals in the future could not be given full-fledged infrared vision, said Nicolelis. For that matter, cortical neuroprostheses could be developed to give animals or humans the ability to see in any region of the electromagnetic spectrum, or even magnetic fields. “We could create devices sensitive to any physical energy,” he said. “It could be magnetic fields, radio waves, or ultrasound. We chose infrared initially because it didn’t interfere with our electrophysiological recordings.”

Nicolelis and colleagues Eric Thomson and Rafael Carra published their findings in Nature Communications. Their research was sponsored by the National Institute of Mental Health.

“The philosophy of the field of brain-machine interfaces has until now been to attempt to restore a motor function lost to lesion or damage of the central nervous system,” said Thomson, first author of the study. “This is the first paper in which a neuroprosthetic device was used to augment function—literally enabling a normal animal to acquire a sixth sense.”

The mammalian retina is blind to infrared light, and mammals cannot detect any heat generated by the weak infrared light used in the studies. In their experiments, the researchers used a test chamber that contained three light sources that could be switched on randomly. Using visible LED lights, they first taught each rat to choose the active light source by poking its nose into an attached port to receive a reward of a sip of water.

Attached to the microelectrodes was an infrared detector affixed to the animals’ foreheads. The system was programmed so that orientation toward an infrared light would trigger an electrical signal to the brain. The signal pulses increased in frequency with the intensity and proximity of the light.

The researchers returned the animals to the test chamber, gradually replacing the visible lights with infrared lights. At first in infrared trials, when a light was switched on the animals would tend to poke randomly at the reward ports and scratch at their faces, said Nicolelis. This indicated that they were initially interpreting the brain signals as touch. However, over about a month, the animals learned to associate the brain signal with the infrared source. They began to actively “forage” for the signal, sweeping their heads back and forth to guide themselves to the active light source. Ultimately, they achieved a near-perfect score in tracking and identifying the correct location of the infrared light source.

To ensure that the animals were really using the infrared detector and not their eyes to sense the infrared light, the researchers conducted trials in which the light switched on, but the detector sent no signal to the brain. In these trials, the rats did not react to the infrared light.

A key finding, said Nicolelis, was that enlisting the touch cortex for light detection did not reduce its ability to process touch signals. “When we recorded signals from the touch cortex of these animals, we found that although the cells had begun responding to infrared light, they continued to respond to whisker touch. It was almost like the cortex was dividing itself evenly so that the neurons could process both types of information.

This finding of brain plasticity is in contrast with the “optogenetic” approach to brain stimulation, which holds that a particular neuronal cell type should be stimulated to generate a desired neurological function. Rather, said Nicolelis, the experiments demonstrate that a broad electrical stimulation, which recruits many distinct cell types, can drive a cortical region to adapt to a new source of sensory input.

A major technical achievement that could enable the creation of a variety of neuroprosthetic devices was the laboratory’s ability, announced last December, to record brain signals from almost 2,000 brain cells at once, an unprecedented number said Nicolelis. Ultimately, the researchers hope to record the electrical activity produced simultaneously by 10,000 cortical neurons. Such massive brain recordings will enable more precise control of motor neuroprostheses, such as those being developed by the Walk Again Project to restore motor control to paralyzed people, Nicolelis said.

The Walk Again Project has recently received a $20 million grant from FINEP, a Brazilian research funding agency to allow the development of the first brain-controlled whole body exoskeleton aimed at restoring mobility in severely paralyzed patients. A first demonstration of this technology is expected to happen in the opening game of the 2014 Soccer World Cup in Brazil.

Expanding sensory abilities could also enable a new type of feedback loop to improve the speed and accuracy of such exoskeletons, said Nicolelis. For example, while researchers are now seeking to use tactile feedback to allow patients to feel the movements produced by such “robotic vests,” the feedback could also be in the form of a radio signal or infrared light that would give the person information on the exoskeleton limb’s position and encounter with objects.

Notes about this neuroprosthesis research

Nicolelis is a professor of neurobiology, biomedical engineering, and psychology and neuroscience, and co-director of the Center for Neuroengineering. Thomson is a postdoctoral research associate in neurobiology, and Carra is a visiting medical student from the University of Sao Paulo in Brazil. This research was supported by the National Institutes of Health.