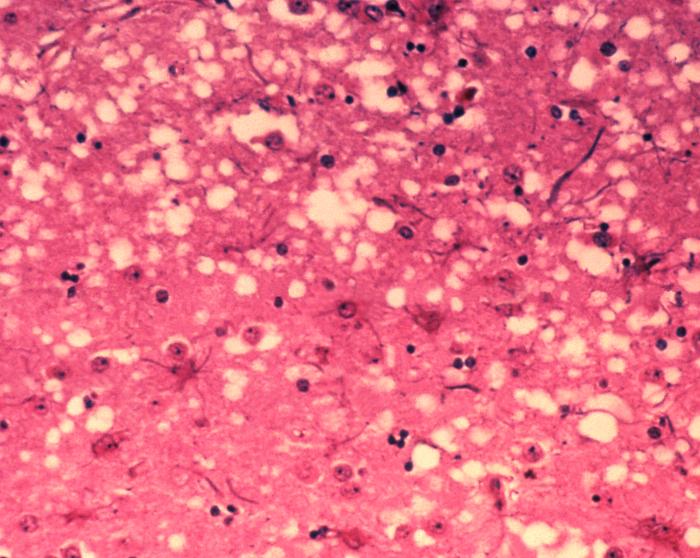 The propagation of human prions was completely inhibited when the recombinant protein was added into the test-tube. This is a micrograph of brain tissue with bovine spongiform encephalopathy. Microscopic "holes" are characteristic in prion-affected tissue sections, causing the tissue to develop a "spongy" architecture.
Home
Featured

Case Western Reserve University researchers today published findings that point to a promising discovery for the treatment and prevention of prion diseases, rare neurodegenerative disorders that are always fatal. The researchers discovered that recombinant human prion protein stops the propagation of prions, the infectious pathogens that cause the diseases.

“This is the very first time recombinant protein has been shown to inhibit diseased human prions,” said Wen-Quan Zou, MD, PhD, senior author of the study and associate professor of pathology and neurology at Case Western Reserve School of Medicine.

Prion diseases are a group of fatal transmissible brain diseases affecting both humans and animals. Prions are formed through a structural change of a normal prion protein that resides in all humans. Once formed, they continue to recruit other normal prion protein and finally cause spongiform-like damage in the brain. Currently, the diseases have no cure.

Previous outbreaks of mad cow disease and subsequent occurrences of the human form, variant Creutzfeldt–Jakob disease, have garnered a great deal of public attention. The fear of future outbreaks makes the search for successful interventions all the more urgent.

Zou, who also serves as the associate director of the National Prion Disease Pathology Surveillance Center at Case Western Reserve, and collaborators hope to extend their finding using transgenic mice expressing the human prion protein and patient-specific induced pluripotent stem cells (iPSCs)-derived neurons because they are made from human cells, offering an additional level of authenticity. The new animal models were generated in collaboration with Case Western Reserve School of Medicine faculty members, Robert Petersen, PhD, and Qingzhong Kong, PhD, who are the co-authors in this study. Further, patient-specific iPSCs-derived neurons have also just been generated in collaboration with fellow faculty, Paul Tesar, PhD, and Xin Qi, PhD.