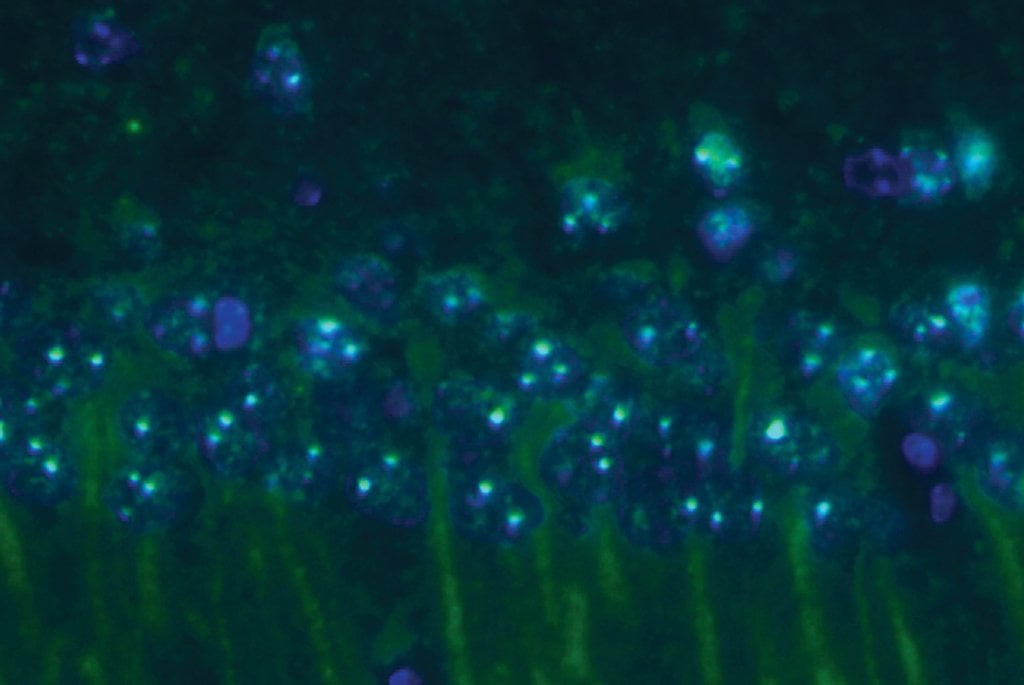 The human protein prefoldin can reduce the neuronal toxicity of clumps of amyloid-β proteins that collect in the brains of Alzheimer’s patients.

Alzheimer’s disease is a progressive degenerative brain disease most commonly characterized by memory deficits. Loss of memory function, in particular, is known to be caused by neuronal damage arising from the misfolding of protein fragments in the brain. Now, a group of researchers led by Mizuo Maeda of the RIKEN Bioengineering Laboratory, and including researchers from the Laboratory for Proteolytic Neuroscience at the RIKEN Brain Science Institute, has found that the human protein prefoldin can change the way these misfolded protein aggregates form and potentially reduce their toxic impact on the brains of Alzheimer’s patients.

The formation of insoluble fibril aggregates of the protein amyloid-β has been identified as a key mechanism responsible for memory loss in Alzheimer’s patients. These fibrils are toxic to neurons, and finding a means of preventing their formation represents a key strategy in the development of a therapy for the disease. Recent studies suggest methods that alter the mechanism of amyloid-β aggregates could offer a promising approach.

Prefoldin is a molecular chaperone involved in preventing the clumping of misfolded proteins and helping misfolded proteins return to their normal shape. The researchers found that amyloid-β molecules incubated with even just a small amount of human prefoldin underwent a change in aggregation behavior—they instead formed into small, soluble oligomer clumps. The observations suggest that human prefoldin interacts with amyloid-β molecules to alter their binding properties.

Many researchers currently believe that amyloid-β oligomers are themselves a toxin that induces neuronal dysfunction. The present results, however, suggest that certain types of oligomers may in fact be less toxic than other conformations of amyloid-β aggregates. Increasing the expression of human prefoldin in the brain may therefore increase the proportion of less toxic amyloid-β aggregates, presenting a potential means of fighting the disease.

Study Delves Into Emotional Wellness in the Human Brain

“Our findings may also apply to various other neurological diseases caused by protein misfolding, such as prion disease, Huntington’s disease and Parkinson’s disease,” explains Tamotsu Zako from the research team.