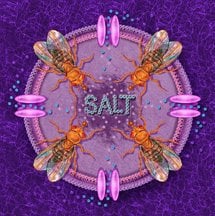 An illustration showing how flies taste salt via channels made up of the protein IR76b, which let sodium ions into the cells that sense low salt taste. Credit: Tim Phelps/Johns Hopkins University School of Medicine
Home
Featured

Fruit fly’s salt taste sensation strategy may apply to other animals, including humans.

As anyone who’s ever mixed up the sugar and salt while baking knows, too much of a good thing can be inedible. What hasn’t been clear, though, is how our tongues and brains can tell when the saltiness of our food has crossed the line from yummy to yucky – or, worse, something dangerous.

Now researchers at the Johns Hopkins University School of Medicine and the University of California, Santa Barbara report that in fruit flies, at least, that process is controlled by competing input from two different types of taste-sensing cells: one that attracts flies to salty foods, and one that repels them. Results of their research are described in the June 14 issue of Science.

“The body needs sodium for crucial tasks like putting our muscles into action and letting brain cells communicate with each other, but too much sodium will cause heart problems and other health concerns,” explains Yali Zhang, Ph.D., who led the recent study as part of his graduate work at Johns Hopkins. To maintain health, Zhang says, humans and other animals perceive foods with relatively low salt concentrations as tasty, but avoid eating things with very high salt content.

To find out how the body pulls off this balancing act, Zhang worked with his adviser, Craig Montell, Ph.D., a leading scientist in the field of sensory biology and now a professor at UC Santa Barbara, and graduate student Jinfei Ni to get an up-close view of the fly equivalent of a tongue: its long, curly proboscis. They zoomed in on the proboscis’ so-called sensilla, hair-like structures that serve as the fly’s taste buds.

To further test this conclusion, the team mutated a gene called Ir76b that codes for a protein they suspected was involved in the action of the attractive sensilla. To their great surprise, Zhang found that loss of Ir76b function caused flies to avoid the otherwise attractive low-salt food. The reason for this, he found, was that mutating Ir76b only impaired the responses of the attractive sensilla, leaving the repellant sensilla to win the day. Looking further into the action of the protein produced by Ir76b, the team found that it is a channel with a pore that lets sodium pass into the taste cells of the sensilla. Unlike most pores of this type, which have gates that must be opened by certain key chemical or voltage changes in their environment, this gate is always open, meaning that at any time, sodium can flood into the cell and spark an electrical signal. “It’s an unusual setup, but it makes sense because the local sodium concentration outside taste receptor cells appears to be a lot lower than that surrounding most cells. The taste receptor cells don’t need to keep the gate closed to protect themselves from that excess sodium,” Zhang says.

Differences in Saliva Bacteria of Students With Recent Suicidal Thoughts

Long before we humans started worrying about regulating our sodium intake, it was a problem all animals had to deal with, Zhang says, and thus his research has implications for other animals, including humans. Although animal taste buds and insect sensilla have different makeups, he suspects that the tug-of-war principle may apply to salt-tasting throughout the animal kingdom, given that different species behave similarly when it comes to salty foods. Identifying the low-salt sensor in humans could be particularly useful, he says, as it could lead to the development of better salt substitutes to help people control their sodium intake.

Notes about this neurogastronomy and taste receptor research

This study was funded by the National Institute on Deafness and Other Communication Disorders (grant number DC007864).