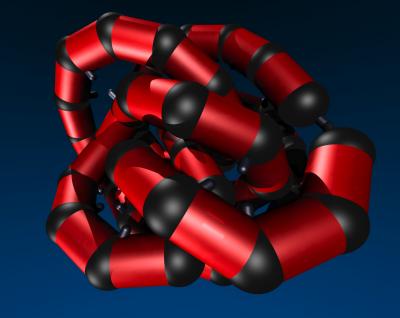 Physicists of the University of Vienna together with researchers from the University of Natural Resources and Life Sciences Vienna developed nano-machines which recreate principal activities of proteins. They present the first versatile and modular example of a fully artificial protein-mimetic model system, thanks to the Vienna Scientific Cluster (VSC), a high performance computing infrastructure. These “bionic proteins” could play an important role in innovating pharmaceutical research. The results have now been published in the journal Physical Review Letters.

Proteins are the fundamental building blocks of all living organism we currently know. Because of the large number and complexity of bio-molecular processes they are capable of, proteins are often referred to as “molecular machines”. Take for instance the proteins in your muscles: At each contraction stimulated by the brain, an uncountable number of proteins change their structures to create the collective motion of the contraction. This extraordinary process is performed by molecules which have a size of only about a nanometer, a billionth of a meter. Muscle contraction is just one of the numerous activities of proteins: There are proteins that transport cargo in the cells, proteins that construct other proteins, there are even cages in which proteins that “misbehave” can be trapped for correction, and the list goes on and on. “Imitating these astonishing bio-mechanical properties of proteins and transferring them to a fully artificial system is our long term objective”, says Ivan Coluzza from the Faculty of Physics of the University of Vienna, who works on this project together with colleagues of the University of Natural Resources and Life Sciences Vienna.

In a recent paper in Physical Review Letters, the team presented the first example of a fully artificial bio-mimetic model system capable of spontaneously self-knotting into a target structure. Using computer simulations, they reverse engineered proteins by focusing on the key elements that give them the ability to execute the program written in the genetic code. The computationally very intensive simulations have been made possible by access to the powerful Vienna Scientific Cluster (VSC), a high performance computing infrastructure operated jointly by the University of Vienna, the Vienna University of Technology and the University of Natural Resources and Life Sciences Vienna.

Artificial proteins in the laboratory

The team now works on realizing such artificial proteins in the laboratory using specially functionalized nanoparticles. The particles will then be connected into chains following the sequence determined by the computer simulations, such that the artificial proteins fold into the desired shapes. Such knotted nanostructures could be used as new stable drug delivery vehicles and as enzyme-like, but more stable, catalysts.

Notes about this artificial protein research

This project was supported by the Austrian Science Fund (FWF) within the SFB “Vienna Computational Materials Laboratory” (ViCoM).