Mini Retinas Shed Light on Connection Between Eyes and Brain

Summary: Findings could help to develop new treatments to restore site when connections between the eyes and brain are damaged, researchers say.

IUPUI biologists are growing ‘mini retinas’ in the lab from stem cells to mimic the growth of the human retina. The researchers hope to use the research to restore sight when critical connections between the eye and the brain are damaged. These models also allow the researchers to better understand how cells in the retina develop and are organized. These results are published online in Scientific Reports, a Nature Research journal.

The lab-created mini retinas, called retinal organoids, are collections of cells that grow in a manner similar to how the retina develops in the body. The retinal organoids are created in an IUPUI biology department research lab using human pluripotent stem cells, or hPSCs, which can be derived from adult skin cells.

Jason Meyer, an associate professor of biology in the School of Science at IUPUI, is using the retinal organoids to better understand retinal ganglion cells, or RGCs, which provide the connection between the eye and the brain. These cells project long axons to transmit visual information. When that connection is disturbed, a person loses sight.

“In the past couple of years, retinal organoids have become a focus in the research community,” Meyer said. “However, there hasn’t really been any emphasis on those retinal ganglion cells within these mini retinas, the retinal organoids, so this study is not only looking at how the retinal organoids develop and organize but also exploring the long axons they need in order to connect with the brain.”

RGCs are the cells primarily damaged by glaucoma, a disease that affects about 70 million people worldwide and is the second leading cause of blindness. 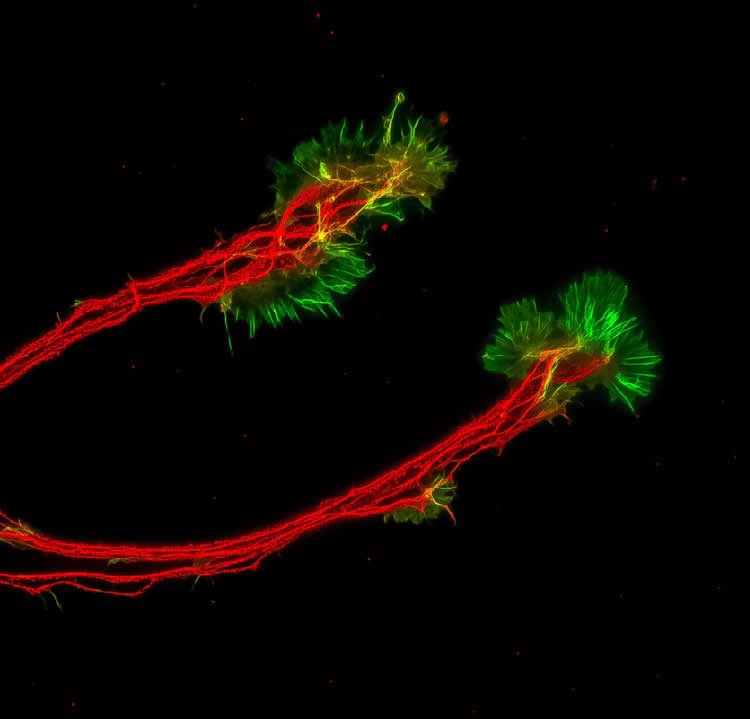 Axons of retinal ganglion cells (red) derived from human pluripotent stem cells bundle together and navigate their environment using growth cones (green), similar to human development of the optic nerve. NeuroscienceNews.com image is credited to Department of Biology, School of Science at IUPUI.

“There’s a lot we have to understand about these cells outside of the body before we can put them into humans for transplants and treating those diseases,” said Clarisse Fligor, a biology graduate researcher and first author on the paper. “This research is looking at ways that we can encourage growth of these cells for possible cell-replacement therapies to treat these different injuries or diseases.”

Fligor looked through different growth factors involved in RGC development and found that a protein called Netrin-1 significantly increased the outgrowth of axons from these cells.

“This protein is not expressed long term; it is most prominently during early human development,” Meyer said. “Once the retina is established, it’s not as available, which is why retinal ganglion cells usually can’t fix themselves. Strategies so far to replace retinal ganglion cells by transplanting new cells have not been able to restore those connections because the body itself doesn’t produce these signals.” The researchers hope this study is an important step toward using lab-grown cells for cell-replacement purposes.

“If we want to be able to use these cells for therapies and encourage the proper wiring of these cells within the rest of the nervous system, perhaps we need to take a page out of the playbook of human development and try to re-create some of those features ordinarily found during early human development,” Meyer said.

Funding: The study was supported in part by the National Eye Institute, the National Science Foundation, and the Indiana Department of Health Spinal Cord and Brain Injury Research Fund.

Retinal organoids are three-dimensional structures derived from human pluripotent stem cells (hPSCs) which recapitulate the spatial and temporal differentiation of the retina, serving as effective in vitro models of retinal development. However, a lack of emphasis has been placed upon the development and organization of retinal ganglion cells (RGCs) within retinal organoids. Thus, initial efforts were made to characterize RGC differentiation throughout early stages of organoid development, with a clearly defined RGC layer developing in a temporally-appropriate manner expressing a complement of RGC-associated markers. Beyond studies of RGC development, retinal organoids may also prove useful for cellular replacement in which extensive axonal outgrowth is necessary to reach post-synaptic targets. Organoid-derived RGCs could help to elucidate factors promoting axonal outgrowth, thereby identifying approaches to circumvent a formidable obstacle to RGC replacement. As such, additional efforts demonstrated significant enhancement of neurite outgrowth through modulation of both substrate composition and growth factor signaling. Additionally, organoid-derived RGCs exhibited diverse phenotypes, extending elaborate growth cones and expressing numerous guidance receptors. Collectively, these results establish retinal organoids as a valuable tool for studies of RGC development, and demonstrate the utility of organoid-derived RGCs as an effective platform to study factors influencing neurite outgrowth from organoid-derived RGCs.