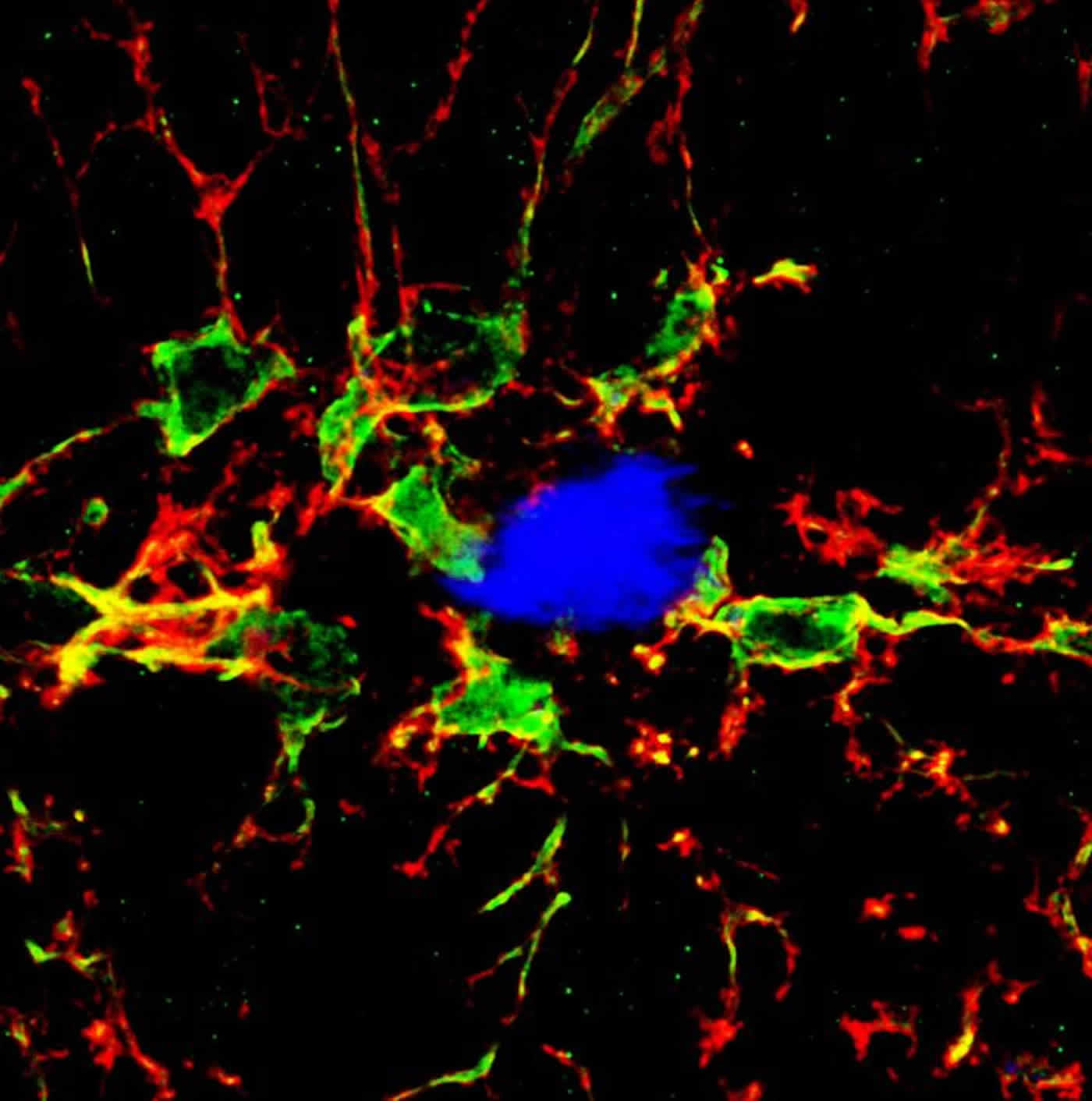 Microglia (green) surround an amyloid plaque (blue) in the brain of an Alzheimer's disease mouse model. UCI researchers have shown that endogenous mouse antibodies (red) associate with microglia in the brains of such mice and boost microglia's ability to degrade plaques. Credit: Samuel Marsh / UCI.

Immune cells that normally help us fight off bacterial and viral infections may play a far greater role in Alzheimer’s disease than originally thought, according to University of California, Irvine neurobiologists with the Sue & Bill Gross Stem Cell Research Center and the Institute for Memory Impairments and Neurological Disorders.

The researchers discovered this when Alzheimer’s disease mice genetically modified to lack these key immune cells in their blood developed the distinctive brain plaques associated with the neurodegenerative disorder much more quickly.

According to Mathew Blurton-Jones, assistant professor of neurobiology & behavior, and doctoral student Samuel Marsh, their findings could lead to the creation of new techniques to help identify, or perhaps even treat, individuals at risk of developing the disease.

Alzheimer’s is the leading cause of age-related dementia and is thought to be driven by the accumulation of a protein called beta-amyloid that aggregates to form amyloid plaques in the brain. Microglia, immune cells that reside in the brain, attempt to clear this buildup, but in Alzheimer’s, they appear to be fighting a losing battle. While many studies have explored the role of microglia in Alzheimer’s, very few researchers have asked whether a different set of immune cells called T-cells and B-cells that reside outside the brain and play a large part in autoimmune diseases might also impact Alzheimer’s.

To test this idea, Blurton-Jones and Marsh bred genetically modified Alzheimer’s disease mice to lack three key immune cell types: T-cells, B-cells and NK-cells. Six months later, when the brains of these mice were compared to those of Alzheimer’s mice with intact immune systems, the scientists found a more than twofold increase in beta-amyloid accumulation.

“We were very surprised by the magnitude of this effect,” Blurton-Jones said. “We expected the influence of the deficient immune system on Alzheimer’s pathology to be much more subtle.”

To understand how the loss of these immune cells was increasing beta-amyloid, he and Marsh examined the interactions between these peripheral cells and microglia within the brain.

“We found that in Alzheimer’s mice with intact immune systems, antibodies – which are made by B-cells – accumulated in the brain and associated with microglia. This, in turn, helped increase the clearance of beta-amyloid,” Marsh said.

To further confirm the importance of this interplay between immune cells in the blood and those in the brain, the researchers transplanted healthy bone marrow stem cells into the immune-deficient Alzheimer’s mice. Since T-, B- and NK-cells develop from bone marrow stem cells, this transplantation led to a reconstitution of the missing immune cells. This allowed the B-cells to produce antibodies that once again reached the brain and aided microglia in eradicating the beta-amyloid.

“We know that the immune system changes with age and becomes less capable of making T- and B-cells,” Blurton-Jones said. “So whether aging of the immune system in humans might contribute to the development of Alzheimer’s is the next big question we want to ask.”

How We Learn From Being Wrong Can Lead to Anxiety

Funding: The research was supported by the National Institutes of Health (grant RF1AG048099) and the Alzheimer’s Association.

The innate immune system is strongly implicated in the pathogenesis of Alzheimer’s disease (AD). In contrast, the role of adaptive immunity in AD remains largely unknown. However, numerous clinical trials are testing vaccination strategies for AD, suggesting that T and B cells play a pivotal role in this disease. To test the hypothesis that adaptive immunity influences AD pathogenesis, we generated an immune-deficient AD mouse model that lacks T, B, and natural killer (NK) cells. The resulting “Rag-5xfAD” mice exhibit a greater than twofold increase in β-amyloid (Aβ) pathology. Gene expression analysis of the brain implicates altered innate and adaptive immune pathways, including changes in cytokine/chemokine signaling and decreased Ig-mediated processes. Neuroinflammation is also greatly exacerbated in Rag-5xfAD mice as indicated by a shift in microglial phenotype, increased cytokine production, and reduced phagocytic capacity. In contrast, immune-intact 5xfAD mice exhibit elevated levels of nonamyloid reactive IgGs in association with microglia, and treatment of Rag-5xfAD mice or microglial cells with preimmune IgG enhances Aβ clearance. Last, we performed bone marrow transplantation studies in Rag-5xfAD mice, revealing that replacement of these missing adaptive immune populations can dramatically reduce AD pathology. Taken together, these data strongly suggest that adaptive immune cell populations play an important role in restraining AD pathology. In contrast, depletion of B cells and their appropriate activation by T cells leads to a loss of adaptive–innate immunity cross talk and accelerated disease progression.