Summary: Researchers have identified a single gene that increases the need for sleep when we are fighting sickness. NEMURI helps fight infections with its antimicrobial activity, and is secreted by neurons to drive prolonged sleep during infection.

Humans spend nearly one-third of their lives in slumber, yet sleep is still one of biology’s most enduring mysteries. Little is known about what genetic or molecular forces drive the need to sleep–until now. In a study of over 12,000 lines of fruit flies, researchers from the Perelman School of Medicine at the University of Pennsylvania have found a single gene, called nemuri, that increases the need for sleep. These findings are published today in Science.

The NEMURI protein fights germs with its inherent antimicrobial activity and it is secreted by cells in the brain to drive prolonged, deep sleep after an infection.

“While it’s a common notion that sleep and healing are tightly related, our study directly links sleep to the immune system and provides a potential explanation for how sleep increases during sickness,” said senior author Amita Sehgal, PhD, a professor of Neuroscience and director of Penn’s Chronobiology Program.

Without the nemuri gene, flies were more easily aroused during daily sleep, and their acute need for an increase in sleep–induced by sleep deprivation or infection–was reduced. On the other hand, sleep deprivation, which increases the need for sleep, and to some extent infection, stimulated nemuri to be expressed in a small set of fly neurons nestled close to a known sleep-promoting structure in the brain. Overexpression of nemuri increased sleep in bacteria-infected flies and led to their increased survival compared to non-infected control flies.

In response to infection, NEMURI appears to kill microbes, most likely in the peripheral parts of the fruit fly body, and increases sleep through its action in the brain. Several molecules like NEMURI, which is an antimicrobial peptide (AMP), have multiple functions that help combat infection, but its sleep-promoting role may be just as important for host defense, the researchers suggest, given that increased sleep during sickness promotes survival in the flies. 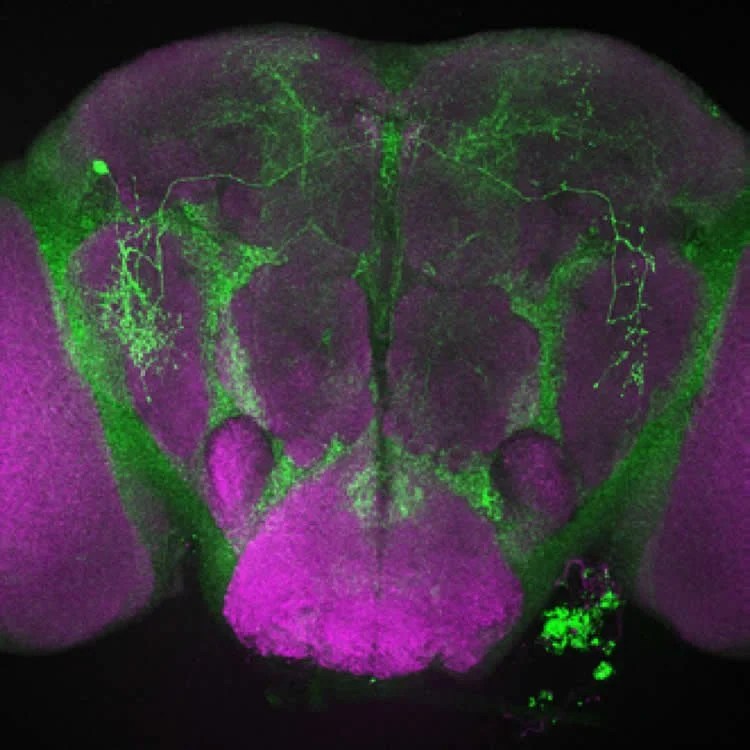 This is an image of a fruit that fly has been infected with bacteria, showing nemuri expression (green) in the brain — a single neuron and its projections on either side of the brain. NeuroscienceNews.com image is credited to Amita Sehgal, Perelman School of Medicine, University of Pennsylvania; Science.

What’s more, the authors note that cytokines such as interleukin-1 (IL-1), an immune cell molecule, are implicated in human sleep. IL-1 can function in the same pathway as AMPs, and it accumulates after prolonged wakefulness and appears to promote sleep. In mammals, cytokines can induce production of AMPs, but AMPS may also affect the expression of cytokines. Given this interwoven relationship, the researchers conclude that NEMURI is a working link between immune function and sleep.

“The NEMURI protein is a genuine driver of keeping sleep on track under conditions of high sleep need like when we’re sick,” said first author Hirofumi Toda, PhD, a postdoctoral fellow in Sehgal’s lab. “In the next phase of our work, we plan to investigate the mechanism by which NEMURI drives sleep.”

Funding: Julie Williams and Michael Gulledge, both from Sehgal’s lab, are also co-authors on this paper. This work was funded by the Howard Hughes Medical Institute and the National Institutes of Health (R01GM123783 402).

Sleep remains a major mystery of biology. In particular, little is known about the mechanisms that account for the drive to sleep. In an unbiased screen of more than 12,000 Drosophila lines, we identified a single gene, nemuri, that induces sleep. The NEMURI protein is an antimicrobial peptide that can be secreted ectopically to drive prolonged sleep (with resistance to arousal) and to promote survival after infection. Loss of nemuri increased arousability during daily sleep and attenuated the acute increase in sleep induced by sleep deprivation or bacterial infection. Conditions that increase sleep drive induced expression of nemuri in a small number of fly brain neurons and targeted it to the sleep-promoting, dorsal fan-shaped body. We propose that NEMURI is a bona fide sleep homeostasis factor that is particularly important under conditions of high sleep need; because these conditions include sickness, our findings provide a link between sleep and immune function.