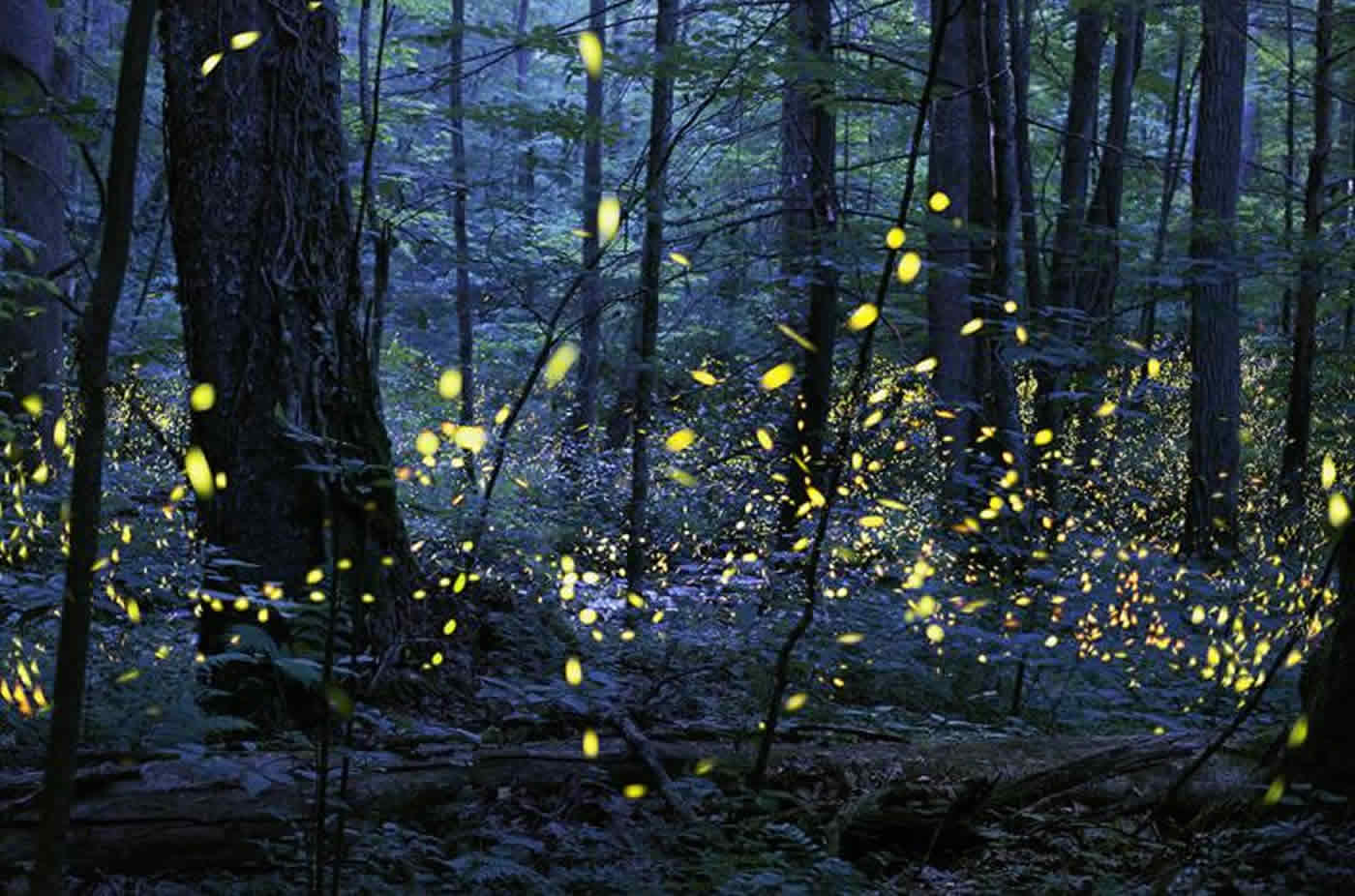 Image of fireflies glowing in unison. The image is credited to Radim Schreiber.

Fireflies, Heart Beats, and the Science of Sync

Summary: Researchers have shown experimentally how a simple network of identical synchronized nanomachines can give rise to out-of-sync, complex states.

Fireflies, heart cells, clocks, and power grids all do it–they can spontaneously sync up, sending signals out in unison. For centuries, scientists have been perplexed by this self-organizing behavior, coming up with theories and experiments that make up the science of sync. But despite progress being made in the field, mysteries still persist–in particular how networks of completely identical elements can fall out of sync.

Now, in a new study in the March 8 issue of the journal Science, Caltech researchers have shown experimentally how a simple network of identical synchronized nanomachines can give rise to out-of-sync, complex states. Imagine a line of Rockette dancers: When they are all kicking at the same time, they are in sync. One of the complex states observed to arise from the simple network would be akin to the Rockette dancers kicking their legs “out of phase” with each other, where every other dancer is kicking a leg up, while the dancers in between have just finished a kick.

The findings experimentally demonstrate that even simple networks can lead to complexity, and this knowledge, in turn, may ultimately lead to new tools for controlling those networks. For example, by better understanding how heart cells or power grids display complexity in seemingly uniform networks, researchers may be able to develop new tools for pushing those networks back into rhythm.

“We want to learn how we can just tickle, or gently push, a system in the right direction to set it back into a synced state,” says Michael L. Roukes, the Frank J. Roshek Professor of Physics, Applied Physics, and Bioengineering at Caltech, and principal investigator of the new Science study. “This could perhaps engender a form of new, less harsh defibrillators, for example, for shocking the heart back into rhythm.”

Synchronized oscillations were first noted as far back as the 1600s, when the Dutch scientist Christiaan Huygens, known for discovering the Saturnian moon Titan, noted that two pendulum clocks hung from a common support would eventually come to tick in unison. Through the centuries, mathematicians and other scientists have come up with various ways to explain the strange phenomenon, seen also in heart and brain cells, fireflies, clouds of cold atoms, the circadian rhythms of animals, and many other systems.

In essence, these networks consist of two or more oscillators (the nodes of the network), which have the ability to tick on their own, sending out repeated signals. The nodes must also be connected in some way to each other (through the network edges), so that they can communicate and send out messages about their various states.

But it has also been observed since the early 2000s that these networks, even when consisting of identical oscillators, can spontaneously flip out of sync and evolve into complex patterns. To better understand what is going on, Roukes and colleagues began to develop networks of oscillating nanomechanical devices. They started by just connecting two, and now, in the new study, have developed an interconnected system of eight.

To the team’s surprise, the eight-node system spontaneously evolved into various exotic, complex states. “This is the first experimental demonstration that these many distinct, complex states can occur in the same simple system,” says co-author James Crutchfield, a visiting associate in physics at Caltech and a professor of physics at UC Davis.

To return to the Rockettes metaphor, another example of one of these complex states would be if every other dancer were kicking a leg up, while the dancers in between were doing something entirely different like waving their hats. And the examples get even more nuanced than this; with pairs of dancers doing the same movements between pairs of other dances doing something different.

“The perplexing feature of these particular states is that the Rockettes in our metaphor can only see their nearest neighbor, yet manage to be coordinating with their neighbor’s neighbor,” says lead author Matthew Matheny, a research scientist at Caltech and member of the Kavli Nanoscience Institute.

“We didn’t know what we were going to see,” says Matheny. “But what these experiments are telling us is that you can get complexity out of a very simple system. This was something that was hinted at before but not shown experimentally until now.”

“These exotic states arising from a simple system are what we call emergent,” says Roukes. “The whole is greater than the sum of the parts.”

The researchers hope to continue to build increasingly complex networks and observe what happens when more than eight nodes are connected. They say that the more they can understand about how the networks evolve over time, the more they can precisely control them in useful ways. And eventually they may even be able to apply what they are learning to model and better understand the human brain–one of the most complex networks that we know of, with not just eight nodes but 200 billion neurons connected to each other typically by thousands of synaptic edges.

“Decades after the first theories of the science of sync, and we are just finally beginning to understand what’s going on,” says Roukes. “It’s going to take quite a while before we understand the unbelievably complex network of our brain.”

Exotic states in a simple network of nanoelectromechanical oscillators

INTRODUCTION
A paramount contemporary scientific challenge is to understand and control networks. General studies of networks are essential to a variety of disciplines, including materials science, neuroscience, electrical engineering, and microbiology. To date, most studies are observational or “top-down,” relying on phenomenological models of nodal behavior deduced from data extracted from observations of the entire network. On the other hand, oscillator synchronization provides a popular “bottom-up” experimental paradigm for studies of network behavior. Synchronization occurs when a large number of networked oscillators tend to phase-lock and reach global consensus, despite the presence of internal disorder (such as differences in oscillator frequencies). However, the state of global consensus is not the only dynamical state manifested within networks of coupled oscillators. Recent work has discovered long-lived states that spontaneously break the underlying symmetries of the network, even when its constituent nodes are identical. Understanding the mechanisms that underlie these exotic symmetry-breaking dynamics will be of general benefit to network science and engineering. To enable experimental studies with unprecedented control and resolution, we developed an oscillator network based on nonlinear nanoelectromechanical systems (NEMS).

RATIONALE
Complex oscillator dynamics emerge in a variety of settings. Previous experimental studies on symmetry breaking in oscillator networks have manifested such complex behavior only by implementing complicated coupling mechanisms designed for that purpose. By contrast, real-world networks are often dominated by simple coupling, so these previous experimental results cannot readily be generalized. Here, exotic states are seen to emerge within NEMS oscillator networks, just beyond the weak coupling limit in simple settings.

RESULTS
Using an array of coupled nonlinear NEMS oscillators, we observed spontaneous symmetry breaking in a simple and general network setting. These NEMS oscillator nodes were made to be nearly identical, and their fastest dynamical time scales were short enough to generate large datasets, permitting observation and statistical analyses of exotic, slowly emerging network phenomena. In addition, NEMS are very stable, so that transient effects within the network were able to relax within experimental time scales. We examined the network dynamics in detail throughout parameter space and showed experimentally that a simple network of oscillators can reproduce the predictions of theoretical models with explicit complex interactions. We fully explained these phenomena by applying a higher-order phase approximation to the full oscillator model. As strong evidence of the symmetry-breaking argument, we delineated the symmetry subgroups associated with each state.

CONCLUSION
Our results show that simple real-world oscillator networks display complex and exotic system states without the need for complex interactions. Our findings can be applied to observational studies of the behavior of natural or engineered oscillator networks. This work clearly elucidates how a 16-dimensional system, comprising eight magnitude-phase oscillators, collapses into synchronized states that evolve within lower-dimensional subspaces. Real-world networks based on our nonlinear NEMS oscillator platform will enable further insight into the mechanisms by which such behavior emerges in more complex topologies at even larger network scales.